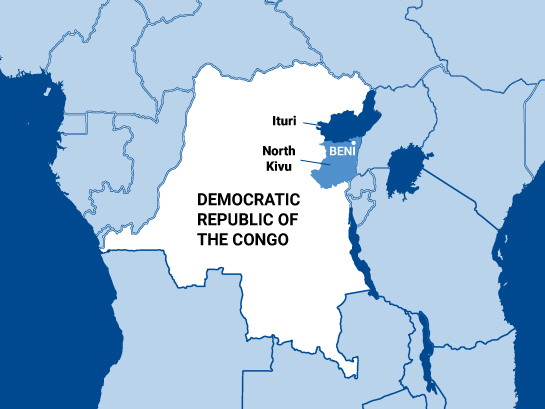 Two women were injured when a bomb exploded inside a church in Beni, in the troubled north-east region of the Democratic Republic of Congo (DRC), on Sunday 27 June, one of three blasts that took place in the city over the weekend.

The makeshift bomb went off in the church shortly before a service attended by many children and their parents was due to begin. “They were targeting a large crowd because the ceremony would bring together children, their parents and the faithful,” said a church leader.

One of the injured women described how she had just entered the church when the explosion happened. “I heard ‘boom’… Blood started flowing from my mouth,” she said. “I lost four teeth and was injured in the arms.” The second victim was wounded in the leg.

Hours after the church bombing a suicide bomber died in an attack outside a bar in the centre of Beni. The previous day a bomb exploded next to a petrol station on the outskirts of Beni without causing any damage.

Beni is in the North Kivu province which, along with neighbouring Ituri province, was placed under a “state of siege” on 6 May by President Felix Tshisekedi because of rising violence from the Allied Democratic Forces (ADF), an extremist Islamist group with suspected ties to Islamic State (also known as ISIS, ISIL or Daesh).

The ADF, which has been active in the mainly Christian north-east of the DRC for over 20 years, attacked camps for internally displaced persons (IDPs) in both North Kivu and Ituri provinces on 31 May, killing at least 55 people, including an Anglican minister.