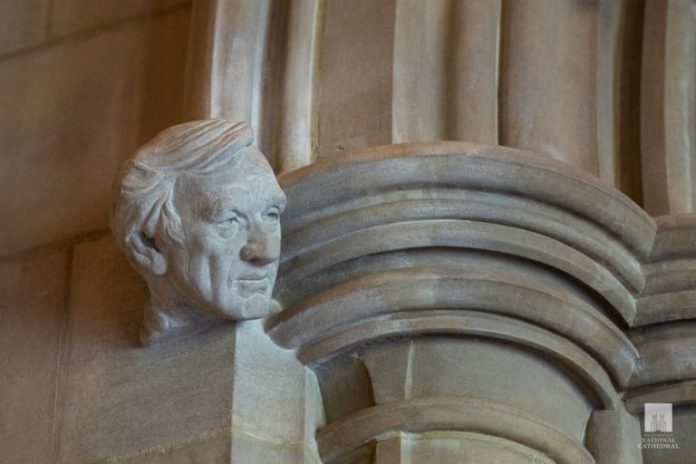 Washington National Cathedral today (27 April 2021) announced that the Cathedral has added a stone carving of Holocaust survivor and Nobel laureate Elie Wiesel to its Human Rights Porch, honoring Wiesel’s legacy as a lifelong human rights defender dedicated to combating indifference and intolerance. A survivor of Auschwitz and Buchenwald camps, Wiesel told his story to millions through his autobiographical novel Night, bringing the horrors of the Holocaust into stark focus for the world. The carving was done in place by Cathedral stone carver Sean Callahan, and has been conceived with the involvement of the Wiesel family.

Wiesel joins the likenesses of, among others, Rosa Parks, Mother Teresa, Jonathan Daniels and Eleanor Roosevelt on the Cathedral’s Human Rights Porch, which is dedicated to individuals who have taken significant, profound and life-changing actions in the fight for human rights, social justice, civil rights, and the welfare of other human beings. Throughout his life, Wiesel used his voice to try to confront gross human rights abuses and prevent genocide, understanding that taking action early could prevent others from suffering the same fate that befell millions of Jews during the Holocaust.

“Elie Wiesel’s life is an extraordinary testimony to the indomitable human spirit and the triumph of love of thy neighbor over hatred and fear, even amidst the darkest and most devastating periods of human history,” said The Very Rev. Randolph Marshall Hollerith, dean of Washington National Cathedral. “From the depths of cruelty inflicted on him, his family, and so many millions of Jews and others during the Holocaust, Elie Wiesel went on to dedicate his life to the pursuit of human rights, and to heed the lessons of history. We are humbled to welcome his likeness to the Cathedral, and pray that his example and legacy will be a blessing and an inspiration to all who enter.”

The announcement of Wiesel’s inclusion in the Cathedral’s Human Rights Porch comes during a time of rising antisemitism in the United States and around the world. The presence of Wiesel’s likeness alongside other prominent human rights defenders from multiple faith traditions underscores the Cathedral’s commitment to standing up against hatred, bigotry and antisemitism. Inspired by Wiesel’s life’s work and legacy, the Cathedral is committed to sustained interfaith dialogue and action to ensure the progress that he fought for in life is protected.

“Throughout his life, Elie devoted himself tirelessly to preserving the memory of the victims of the Holocaust and working to ensure that other communities do not suffer the same fate,” said Marion Wiesel, widow of Elie Wiesel and vice president of the Elie Wiesel Foundation for Humanity. “Not only does his presence in the National Cathedral memorialize his life and honor his commitment to human rights; it also ensures that new generations will learn from his teachings and carry the lessons of his life forward into the future.”

The dedication of the bust will take place in fall 2021. In conjunction with the dedication, the Cathedral, in cooperation with the United States Holocaust Memorial Museum and the Elie Wiesel Foundation for Humanity, will present a program celebrating Elie Wiesel’s enduring legacy. More details on this event will be shared in the months to come.

“Like millions of European Jews, Elie suffered unimaginable horrors. But he responded to that suffering by devoting his life to writing, teaching, and above all as a moral leader and tireless advocate for our common humanity,” said Sara Bloomfield, director of the United States Holocaust Memorial Museum. “That his likeness is now included with others, from many backgrounds, who share these ideals is a fitting tribute to his lasting legacy.”

While there are many representations of biblical figures from the Hebrew scriptures represented in the Cathedral, Wiesel is the first person from the modern-day Jewish community to be added. His inclusion represents the Cathedral’s mission to be a house of prayer for all people and a sacred space for the nation to gather. And his place on the Cathedral’s Human Rights Porch will serve as an indelible reminder of the necessity of speaking out against hatred in all its forms—the same cause that Wiesel dedicated his life to.

Wiesel was born in Romania in 1928, and in 1944 his family was sent by the Nazis to the Auschwitz and Buchenwald camps, where his father, mother and sister were killed. After the camps were liberated, Wiesel went on to a prolific career as a writer, ultimately authoring 57 books, including Night, about his experiences during the Holocaust. He was a vocal advocate for human rights causes around the world, and served as a professor at Boston University, which created the Elie Wiesel Center for Jewish Studies in his honor. He was the founding chairman of the United States Holocaust Memorial Museum in Washington D.C., and won numerous awards throughout his life, including the Nobel Peace Prize, Presidential Medal of Freedom and Congressional Gold Medal. Wiesel died in 2016 of natural causes.

Using medieval techniques, the depiction of Wiesel was hand-carved by Cathedral stone carver Sean Callahan, who also carved the depictions of Mother Teresa, Rosa Parks, Jonathan Daniels and other sculptures throughout the Cathedral. The Wiesel model was sculpted by North Carolina artist Chas Fagan, a member of the U.S. Commission on Fine Arts whose other works include several carvings at the Cathedral, as well as the official White House portrait of First Lady Barbara Bush; statues of Ronald Reagan and Billy Graham at the U.S. Capitol; and a statue of Pope John Paul II at the Saint John Paul II National Shrine in Washington.