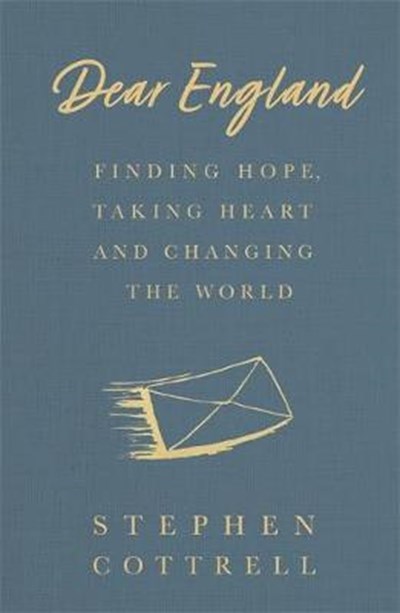 ‘Stephen Cottrell writes about Christ as if he were here now. As if redemption were possible for all of us, as if the void that threatens to engulf us all could be filled by a personal relationship with Christ in the present.

He is a compelling writer.’

A letter to the country, from the Archbishop of York, on why the Christian narrative still makes sense today

‘I’m writing this because I want to explain to you why I am a Christian and why I am trying to follow the Christian way… I am someone who has moved from scepticism to faith… it has shaped me afresh… Somewhere and somehow on the pathway of my life, as I had sought to make sense of what it is to be human and what inhabiting this world could mean, I came to reckon that there is a God and that God is the source, the impetus and the pre-condition of everything… I want to try and show you that it is reasonable to believe.’ Stephen Cottrell

Inspired by a conversation with a barista who asked him why he became a priest, this is the Archbishop of York Stephen Cottrell’s extended answer to that question – as well as the letter he’d like to write to a divided country that no longer sees the relevance or value of the Christian narrative.

Archbishop Stephen is a much-admired voice within the church, but in this book he writes for a more general audience, and those who might call themselves spiritual seekers – as well as anyone who is concerned about the life and unity of the UK. A short, beautiful book, it is both contemplative and deeply practical, drawing on the Archbishop’s desire to ‘commend the Christian faith to those who don’t believe and who don’t go to church’.

‘Why am I writing this letter that thinks it’s a book? It is because I believe in God and I want to change the world. But I don’t believe in God in quite the same way as I believe the sky is blue and the sun rises in the east. It is much more like I believe that love is real and that Chopin’s nocturnes make me cry. Some things are achingly real, but harder to demonstrate, though dig beneath the surface and we all deal in the common currency of love. And I want to change the world – heart by heart. I cry out for the indignities and privations of the world. I long to see change and I thirst for justice. But I begin with the heart, believing that if my heart can change, then the world can change too.’ Stephen Cottrell

Stephen Cottrell is the Archbishop of York and was for almost ten years Bishop of Chelmsford; before that he was Bishop of Reading. He has worked in parishes in London and Chichester, as Canon Pastor of Peterborough Cathedral, as Missioner in the Wakefield diocese and as part of Springboard, the Archbishop of Canterbury’s evangelism team. The author of more than 20 books including children’s books, he enjoys poetry, music and art. Stephen is married to Rebecca who is a potter. They have three sons and a dog, Alfie.

‘Stephen Cottrell writes about Christ as if He were here now. As if redemption were possible for all of us, as if the void that threatens to engulf us all could be filled by a personal relation­ship with Christ in the present. He is a compelling writer.’
Russell Brand

‘A deeply thoughtful exposition of faith’s transformative power, Dear England gave me hope, not only for the future of Christianity, but for a changed world too.’  David Lammy MP

‘In this gentle and accessible book, the Archbishop of York takes the reader by the hand to explore big questions of faith, meaning and belonging. In doing so he explores with clarity and insight the changes we face, refreshing both those of us for whom our faith has become perhaps jaded and tired, as well as those of no faith at all. At the same time he invites us all to think again about our purpose and belief – and in so doing provides a route map for our increasingly uncertain future.’

‘Here’s a refreshing, candid, unabashed and, mercifully, jargon-free letter to all of us. The faith that Stephen Cottrell shares in this book is not shrink-wrapped in the usual churchy clingfilm, but unwrapped and open, exposed to current events, to politics, to the ‘thousand natural shocks’ we all feel in our daily living; and the faith he commends here is all the more robust, and all the more approachable for that exposure. Dear England will be helpful not only to the half-attracted, half-repelled enquirers to whom it is addressed, but also to all those believers who would like help in giving an account of the hope that is in them.’ Revd Malcolm Guite, Girton College, Cambridge