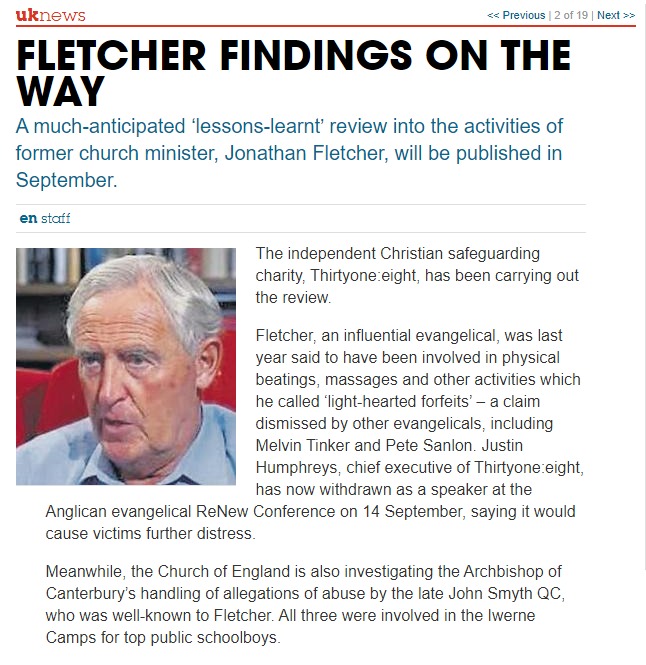 Since it would take a month for you to be able to publish our response to your article which names us, and we feel the issues raised by you are important to victims and the gospel – we have made this an open letter to be shared online as well as your paper.

It is right that you continue to shine a light on the dark activities of John Smyth and Jonathan Fletcher. Your article ‘Fletcher Findings on the Way’ (EN, Aug. 2020) names us as two of the evangelicals who ‘dismissed’ Fletcher’s minimising his activities as ‘light-hearted forfeits.’ No other leader is named as standing with us in our concerns.

Since we were both named in your article (without consulting us), it is only right that we clarify that it is not just Fletcher’s self-description of his behaviour we object to. It is, more seriously, the decades of management and minimisation of both Smyth and Fletcher’s abuse, by those who were in their inner circle. Part of that management and minimisation is seen in the silence of those who are now senior ministers in the Renew network.

Your article correctly notes that Smyth was ‘well-known to Fletcher.’ That is correct – the Smyth and Fletcher families were close. The bonds are evidenced in public records of godparents (Jonathan Fletcher’s brother was godfather to to Smyth’s child.) Not only were Fletcher and Smyth well-known to one another, many currently serving leaders who have remained silent about the abuse were close to them.

The outrageousness of the silence from senior leaders can only be fully recognised when one sees how close many of them were to either, or both, Smyth and Fletcher:

William Taylor chairs the Renew network, which your article notes the CE of Thirtyone:eight felt he had to withdraw his speaking commitment from as ‘it would cause victims further distress.’ William met with John Smyth as a young man studying at Cambridge; in subsequent years Fletcher holidayed with William. William eventually became rector of St. Helens Bishopsgate – where Fletcher served a curacy. He remains a trustee of Proclamation Trust – co-founded by Fletcher.

Vaughan Roberts attended Winchester College, from where the first cohort of under-age boys were tortured by Smyth. Smyth lived near by and spoke at the school CU, often having boys visit his home for dinner or to stay over. One of the best known and brave victims of Smyth was Rev. Mark Stibbe. He notes in an article that he and Vaughan discussed how they were ‘both products of a revival in that school during the 1970s.’ Vaughan eventually became rector of St. Ebbe’s Oxford. He did so after serving alongside Jonathan Fletcher’s brother as his student worker, and after being selected by a panel chaired by Jonathan Fletcher. Since 2002, Pete Wilkinson, Jonathan Fletcher’ nephew, has been Vaughan’s Associate Minister. Vaughan is now President of Proclamation Trust – an organisation co-founded by Jonathan.

A letter to Renew leaders of April 2019 sought to manage the Fletcher scandal. It was signed by William and Vaughan. It is not right that Fletcher’s abuse should be managed by ministers who have been so close to both Smyth and Fletcher. The other two signatories were Bishop Rod Thomas and Rev. Robin Weekes. The former was until recently a member of Fletcher’s preaching group. The latter, as his former curate and successor, has had a career deeply dependent on Fletcher’s patronage.

It cannot be right – not least for the sake of appearances – that the Fletcher scandal have been managed by ministers so close to the men accused of serious abuse. Neither is it right that having had so many opportunities over the years, so few significant leaders have been willing to share what they know of Smyth and Fletcher, that your article had to name us as those who have dissented from the majority approach.

If the reviews reveal that the abuse has been more serious than was claimed by at last years EMA, then it will be all the more necessary that senior leaders who were close to Smyth or Fletcher explain what they knew of their activities, whether they participated in any way, and what they did with any concerns raised by victims. Anybody unwilling to do that should step back from ministry.