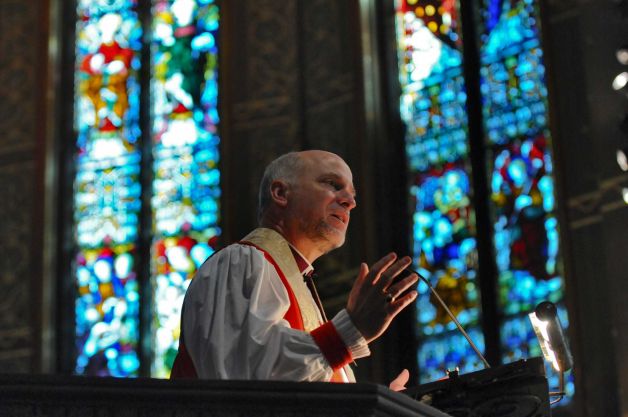 Earlier today, the Title IV Hearing Panel (chaired by The Rt. Rev. Nicholas Knisely) met to deal with “The Matter of The Episcopal Church –vs- The Rt. Rev. William H. Love.

Following today’s public presentation, during which both sides had 45 minutes each to make their case, the five members of the Hearing Panel adjourned to confer with one another in an effort to reach a verdict regarding the case. They will then need to write a written argument supporting their decision. It is my understanding that the public will not be notified of the decision until the written argument is complete, which according to Bishop Knisely may take several weeks. Once that is done, each side will have an opportunity to appeal the ruling if they choose. At the moment, it is unknown exactly when the final outcome of this case will be resolved.

It has been a very long and arduous process thus far, not only for me and my family, but for the entire Diocese of Albany and all those in the wider Body of Christ who have been following this case. Unfortunately, as just shared, it is not over. As Bishop, one of the most difficult and frustrating aspects of the situation we find ourselves in, is knowing that regardless of what action I took in response to General Convention Resolution B012, it would be seen as divisive, resulting in hurting, angry people being left in the wake

As the Bishop of Albany, I love and care deeply for all the people of this Diocese, even those who may have a different understanding than I do regarding same-sex marriage. I know there are people of good will on both sides of this issue, and that ultimately, we want the same thing – to know how best to show God’s love and minister to our Brothers and Sisters in Christ who have same-sex attractions. The problem is, we have a different understanding of how to go about it. May God give us the grace to figure it out as we work together, keeping Christ at the center of all that we do. My hope and prayer is that whatever the outcome of this Hearing / Trial, God will use it for His purposes and that He will be honored and glorified, and His Church and people be blessed.

In closing, I want to say a special THANK YOU to everyone who has been holding me, my family, the Diocese of Albany, The Episcopal Church, and the wider Body of Christ up in prayer. During these past 18 months, I have been deeply touched and humbled by the hundreds of emails, cards, letters, text messages, and phone calls I have received from literally all over the world. The love and concern shared by so many of you, means more that I can ever adequately express. May God the Father, Son and Holy Spirit bless and keep you this day and for evermor