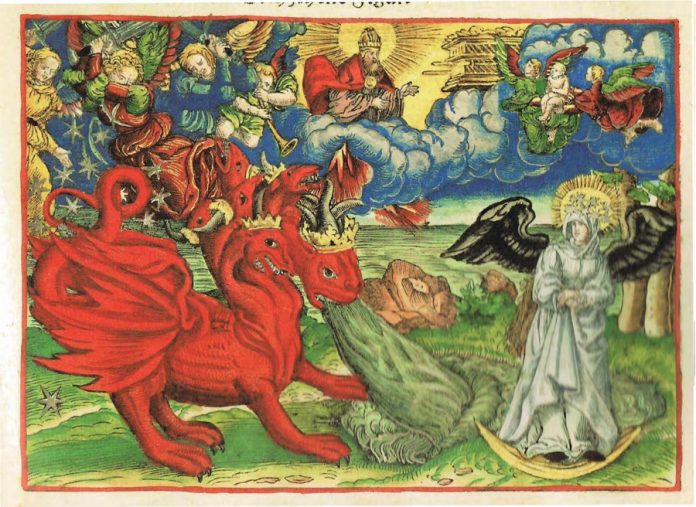 It may seem at first that we have passed from the violent images of the first two verses to a more transformative one in the third verse. But Dennis Lennon returns to Christ’s death on Calvary as the “transposing hour” of the new creation, which inaugurates the apocalyptic battle between Satan, the ruler of this world, and the Church Militant, the Woman who brought forth the man-child. who is to rule the nations with a rod of iron:

At the risk of overloading the imagination and blowing all the fuses, try to visualize this: a world which took God “six days” to create is changed, transformed, “transposing” (as in a shift of key in music) in the space of “an hour.” It was Christ’s “hour” of his passion and resurrection that released indescribable energies to lift the world’s guilt and heal the rift between God and his children. “An hour” in which Jesus broke the satanic “principalities and powers” oppressing the human family. “An hour,” therefore, which makes “transposing” possible, energizing the transposition of the world from a condition of “Paradise Lost” to the potential for Paradise Regained.

The question is – to put it as plainly as we can – if Christ broke the satanic power by his “hour” on the cross and resurrection, how can we account for present wickedness and the demonic in the world? Indeed the forces of evil seem if anything to grow more audacious and ingenious with the passing of time. If this is a pressing question for us, how much more was it for those young churches in Asia Minor towards the end of the first century AD, conscious of the Domitian persecution boiling up over their heads. Where is Christ’s victory over Satan while Caesar (Hitler, Stalin, Pol Pot, Milosevic, etc.) is slaughtering the innocent?

We find the answer in Revelation chapter 12. It opens with what is the essence of spiritual warfare on earth, with all the appearance of a hopelessly unequal contest: a pregnant woman against a dragon (12:1-4). Nothing could be more defenceless than this mother and her newborn child. She is the messianic community, the Church, and her labour pains are the dangers and sufferings endured by the true Israel as they await the advent of their kingly redeemer (Galatians 4:24-27). She is the Church in touch with “the powers of the coming age” (Hebrews 6:5)….

The Satan-dragon must, above all things, snuff out the threat to his domination posed by the woman’s Christ-child. As God continuously creates the cosmos, Satan strives to destroy it. As God created all things good and beautiful, the devil distorts and perverts them. God plants a field of wheat, and the devil strews it with weeds. Above all else, Satan strives to dishonor and discredit God, to deface his image in humankind.

Imagine, then, the demonic fury when there appears in the midst of the human family an individual who perfectly carries the divine image in his truly human nature. He does so on behalf of all humanity and as their saving representative. Hence the chaotic panic in the fallen spiritual of “rulers and powers” (Ephesians 6:12). Small wonder the dragon “stood in front of the woman who was about to give birth, so that he might devour her child the moment it was born (Revelation 12:4)….

There is a power, which overcomes the Great Dragon, but is so extraordinary that Satan himself utterly misunderstood it. Tot the hate-ridden demonic mind, Christ had surely fallen under his enemies’ control when they nailed him to the cross. Now surely the dragon devours the child-redeemer. Crucifixion not only killed its victim but also utterly humiliated him, obliterating his reputation. Crucifixion allowed the caprice and sadism of the executioners full rein. On the cross the total force of satanic spite slammed into Christ’s defenceless body….

But the cross totally outwitted Satan. It has a wisdom and a power incomprehensible to the fallen spiritual powers (1 Corinthians 2:8). Thus an event, which happened in AD 33 outside Jerusalem, is described by John in terms of its impact in the spiritual realm: “And there was war in heaven” (Revelation 12:7). The chaos-dragon, in its serial incarnations from Babylon to Rome and down to our own times, is defeated and ruined by the Christ it crucified (vv. 7-9). It is a moment, or “an hour,” precisely marked with the hymn beginning “Now have come the salvation and the power and the kingdom of our God” (v. 10). Christians believe that world history hinges on what happened in Christ’s “hour.”…

To summarize: Christ decisively defeated Satan in his “hour.” Where men and women believe in Jesus they share in the cry of joy that permeates the New Testament: “Christ has died, Christ is risen, the power of Satan has been broken!” But God allows the Evil One to continue in existence fatally wounded, crazed with frustration, its time running out. Take him with utmost seriousness because his remaining destructiveness is directed against the Church. Satan loathes and fears the Church for her truth. She is entrusted with the truth that sets the world free. Only the Church understands what is going on in the cosmic warfare, she can name names, she can expose Satan for the doomed and damned creature he is, she holds divine revelation, the scriptures, under the Holy Spirit of “wisdom and revelation.” She worships and proclaims “our Saviour, Christ Jesus, who has destroyed death and has brought life and immortality to light through the gospel” (2 Timothy 1:10). Satan dreads the Church when she is true to her truth, … “the light of the world. A city set on a hill cannot be hidden.” (Matthew 5:14).

Notice carefully the significance for us of the next image in the Revelation 12 vision. The mortally damaged serpent pursues “the woman” spewing a jet of water out of its mouth to “sweep her away with a torrent” (vv. 13-15). It spews a torrent of lies, negative propaganda, malicious rumours (think of the glee with which the national media seize upon instances of Christian failure or decline in church attendance figures) to discredit Christ and his truth incarnated his Christian people. It is a war of ideas for hearts and minds and the Church is in the middle of it: the focus of it. This is the point: a Church which holds the truth entrusted to her, constantly meditating in it and applying it in practice, teaching and proclaiming it, is essential to the wholeness of society. “You are the salt of the earth.” But we can expect the forces of darkness to hate us for it. Prayer for the world should begin with prayer for the Church to be true to her truth.

We need protection. Christ has set his Name upon us: “In my name they will drive out demons” (Mark 16:17)…. We are saying that in the struggle to hold to, and to communicate the truth of, Christ, prayer is first a deliberate clothing of the Church with the protecting name of Christ. Against the vast and insidious outpouring of illusions and distortions in the life of our society only such prayer will guard the mind and hold us faithful, strong, clear and resourceful in the Truth. It follows that our prayers for Christ’s transposing of the world will have a dimension of “deliverance” about them.

Tomorrow we “transpose” from the grim battle for the soul of the church and the world to “a kind of tune, which all things hear and fear.”