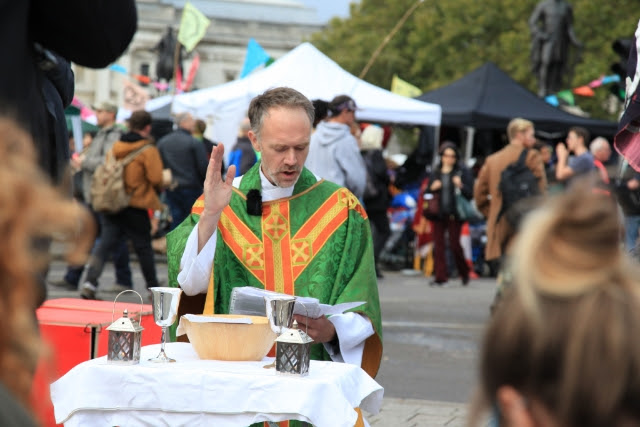 40 Days of Action will be launched on the 26th of February, Ash Wednesday, with a vigil outside Westminster Abbey starting at 2pm to align with Lent. Groups such as Christian Climate Action and Extinction Rebellion Faith Groups will be coming together to call on religious organisations to fully divest from fossil fuels by the end of Lent. Our over-attachment to oil is crucifying the poor and harming life beyond repair.

Priests will say a liturgy inspired by CCA’s Litany of the Earth and then invite all in attendance to have a cross marked upon their foreheads made not from ash, as is traditional, but fake crude oil.

Like ash we are using oil, made from dead matter, as a symbol of mortality and of our struggle to live more compassionate lives. Our over-attachment to oil is crucifying the poor and harming life beyond repair. We are calling all present to reflect on the desperate need to find a balance between the extraordinary benefits of fossil fuels and the need to live simpler more connected lives. We will be calling on the church and all religious organisations to fully divest from fossil fuels by the end of Lent. Other faiths and traditions are invited to offer reflections and then we will process onto Parliament Square to launch the 40 Days 24/7 Interfaith Prayer and Meditation Vigil.

For more information and how to join the Vigil, please visit the facebook event page https://www.facebook.com/events/s/ash-wednesday-vigil-to-launch-/136440977531212/

During the vigil, a global prayer and meditation lasting 40-Days and 40-Nights will begin, with people being invited to choose one action to commit to for 40 days. All are invited into the wilderness together, a ‘vision quest’, a time to reflect upon the ways that we can strengthen the bonds of community and give up our over-dependence on fossil fuels. Some will decrease the amount of time spent on computers and social media, others will value and buy more locally sourced food, switch to an eco-friendly bank, or stop, pause and appreciate the beauty of a planet we are about to lose if we do not change direction. Others will find the courage necessary to step out into the unknown and commit to non-violent civil disobedience.

From the 26th of February until the 11th of April, many Christians around the World mark the season of Lent, the 40 days when Jesus of Nazareth went into the desert to fast and be tempted. This reflects the story in the Jewish tradition of forty years that the Israelites wandered in the desert after exile from Egypt. Many Indigenous traditions such as those of Aboriginals, the California Yuki, the Pueblo people of New Mexico and the Sioux practice prolonged exposure to wilderness as part of their vision quest that will help them find their purpose in life, their role in a community, and how they may best serve the People.

The 40 days action is inclusive by design and by necessity. It is open to everyone and every part of everyone. It can and should be interpreted according to one’s values and principles. It is non-violent and non-passive.

Birds, ancient trees, mammals and all living creatures need a non-toxic planet free from pollution and over-heating. We can act now.

Forty days of protest and strike for some, for others 40 days of restraint and journeying into a simpler more fulfilling life lived with others. For some, 40 days of self-analysis. For some,  reaching into communities, developing relationships and mutual understanding. For many, 40 days of solidarity with those already devastated by the climate and ecological emergency.

Valerie Brown, 40 Days of Action spokesperson, says: “The values and laws of the UK and many other countries around the world including parts of Africa spring from the teachings of the Bible. Likewise the Koran in the Middle East and also in Africa is the foundation of laws and values. 40 Days shines a light on what we have in common rather than the culture of dissent which has developed over the last 20 years. At a time like no other in human history the Climate and Ecological Crises has to pull us together if we are to overcome it. The regenerative message of 40 Days speaks to everyone because we want the same things. It’s an Action which gives each person self expression and time to reflect on what they want to do with our threatened world. The beauty of it in a world of sorrow is so much what we all need.”

Nick Cooper, Christian Climate Action spokesperson, says: “This is about system change, triggered by personal growth. We invite everyone to journey with us into the wilderness of Lent and encounter the ‘quiet voice’ so often hidden from us in daily life. We need desperately to hear that sacred voice calling us together as a global community – learning to live simpler more connected lives, and find the courage to take up civil disobedience in the face of an ever more desperate climate crisis. We need to stop denying the power that we hold as one sacred and interconnected body.”

Maria Chenoweth,  The Earth Day Switch Spokesperson, says: “The climate emergency makes it utterly critical that all individuals and groups must reconfigure and become one mass voice against the continued damage inflicted on our Earth.

The beginning of lent 26th February, marks the date where across the world all faith and non-faith groups come together, united with one voice to tell the world that the fossil fuel industry is destroying our planet.

Together we will reflect on our collective and individual participation with fossil fuels, transitioning away from our personal use and how we indirectly fund them with our own money through the choice of bank, energy supplier and pension provider.”

We join with the Earth

and with each other

and all beings of the future

to bring new life to the land,

to recreate the human community,

to provide justice and peace,

to remember our children,

to remember who we are.

We join together as many and

of one Loving Mystery,

For the healing of the Earth

and the renewal of all Life.

-‘Capacitar Prayer’ -adapted from the UN’s ‘Prayer of the Sabbath’.

Christian Climate Action is a community of Christians supporting each other to take meaningful action in the face of imminent and catastrophic anthropogenic climate breakdown. Inspired by Jesus Christ, and social justice movements of the past, we carry out acts of non-violent direct action to urge those in power to make the change needed.

Our Principles and Values:

OUR GOD IS LOVING: Our God is the creator who cares about creation

WE ACT IN LOVE: God calls us to love our neighbours, our enemies and our God – we must do all things in love.

WE ARE CALLED TO PARTICIPATE IN BRINGING ABOUT A RENEWED WORLD: Creating a world that is fit for generations to come.

OUR ALLEGIANCE IS TO GOD: Where there is a choice between obeying God and obeying the law of the land, we chose to obey God.

WE SET OUR MISSION ON WHAT IS NECESSARY: Mobilising enough of the population to take meaningful action in order to achieve system change.

WE ARE CALLED TO BE FAITHFUL, NOT SUCCESSFUL: None of us are perfect for tackling the climate emergency, but there is no time to wait until we are. We are called to tell the truth about the emergency we are in and to faithfully act now.

WE TAKE ACTION IN A SPIRIT OF REPENTANCE: We acknowledge we are part of the problem that we are fighting against and come to our actions in repentance and prayer.

WE NEED A REGENERATIVE CULTURE: Creating a culture which is healthy, resilient and adaptable.

WE OPENLY CHALLENGE OURSELVES AND THIS TOXIC SYSTEM: Leaving our comfort zones to take action for change.

WE VALUE REFLECTING AND LEARNING: Following a cycle of action, reflection, learning, and planning for more action. Learning from other movements and contexts as well as our own experiences.

WE WELCOME EVERYONE AND EVERY PART OF EVERYONE: Working actively to create safer and more accessible spaces.

WE ACTIVELY MITIGATE FOR POWER: Breaking down hierarchies of power for more equitable participation.

WE AVOID BLAMING AND SHAMING: We live in a toxic system, but no one individual is to blame.

WE ARE A NON-VIOLENT NETWORK: As Jesus did, we use non-violent strategy and tactics as the most effective way to bring about change.

WE ARE BASED ON AUTONOMY AND DECENTRALIZATION: We collectively create the structures we need to challenge power.

Anyone who follows these core principles and values can take action in the name of Christian Climate Action. It is important to note that all actions are taken by individuals acting in their own personal responsibility.

Time has almost entirely run out to address the ecological crisis which is upon us, including the 6th mass species extinction, global pollution, and abrupt, runaway climate change. Societal collapse and mass death are seen as inevitable by scientists and other credible voices, with human extinction also a possibility, if rapid action is not taken.

Extinction Rebellion believes it is a citizen’s duty to rebel, using peaceful civil disobedience, when faced with criminal inactivity by their Government.