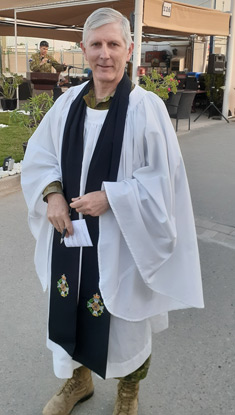 The Reverend Grant Dibden has straddled the Army, Navy and Air Force in military training and logistics and now takes on a spiritual challenge as Anglican Bishop of the Defence Force.

The Primate, Archbishop Philip Freier, has announced the metropolitan Archbishops of Australia have chosen Mr Dibden as Bishop and the government has also approved the Bishop-designate as the Anglican representative on the Religious Advisory Committee to the Services.

“No-one is more surprised than me about this, but I am comforted to know that it didn’t take God by surprise,” Mr Dibden said. “I’m also comforted by the fact that God promises to be with all of us until the end of the age (Matt 28:20) and so I can rely on Him and know that with His help I will be able to fulfil this most important role.”

Given his background, the role might not come as a surprise to others. After graduating from the Royal Military College, Duntroon in 1982  Mr Dibden was allocated to the Army Ordnance Corps. As a Lieutenant Colonel, he commanded the 7th Combat Service Support Battalion and in 2001 instructed at the Australian Defence Force Staff College developing relationships with Navy and RAAF Officers. He was promoted to Colonel in 2002 to Command the Force Support Group and be the Chief of Staff, Headquarters Logistic Support Force.

After the then Colonel Dibden left the regular Army in 2004 he was reduced in rank to Captain to enable his transfer to the Royal Australian Army Chaplains’ Department. He has held various Reserve Chaplain appointments culminating in his current posting as the Senior Chaplain for 2nd. Division.

He was also National Director of the Navigators in Australia.

Dr Freier described the appointment as ‘good news’. “Grant’s extensive military background gives him immediate credibility and rapport with the ADF’s most senior officers. It also means he understands their ethos, values and thinking that is inculcated over many years and so is well placed to provide Christian input.” Dr Freier said. “Grant has a long and active involvement with the Anglican Church. He was ordained Deacon in 2004 and ordained a Priest in 2010 by the Bishop of Bathurst.”

The bishop-designate is already looking to the future, but not forgetting Christian ‘basic training’.

“As the Anglican Bishop to the Defence Force, I will be in a unique position.  I speak with the most senior leadership of the Defence Force advising them on a range of weighty issues such as religious policy, morals and ethics from an Anglican point of view in what is a challenging, secular and diverse environment.  On the other side, I advocate for the Defence Force, particularly the need for care and support of Defence Anglican chaplains at the highest levels of the Anglican Church in Australia.  But arguably, the two most important things are serving the Anglican Chaplains as their Bishop and living out what every Christian leader should: Loving the Lord with all my heart, mind, soul and strength, loving my neighbour as myself, seeking first His kingdom and, making disciples.”