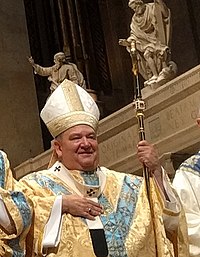 Father Nick VanDenBroeke preached, “We should not be allowing large numbers of Muslims asylum or immigration into our country” and described Islam as “the greatest threat in the world.” His archbishop issued the following statement on 29 Jan 2020

From Archbishop Bernard A. Hebda:

I have spoken with Father VanDenBroeke about his homily on immigration and he has expressed sorrow for his words and an openness to seeing more clearly the Church’s position on our relationship with Islam. The teaching of the Catholic Church is clear. As Pope Benedict XVI noted, “The Catholic Church, in fidelity to the teachings of the Second Vatican Council, looks with esteem to Muslims, who worship God above all by prayer, almsgiving and fasting, revere Jesus as a prophet while not acknowledging his divinity, and honour Mary, his Virgin Mother.”  He called upon the Church to persist in esteem for Muslims, who “worship God who is one, living and subsistent; merciful and almighty, the creator of heaven and earth, who has also spoken to humanity.”  If all of us who believe in God desire to promote reconciliation, justice and peace, we must work together to banish every form of discrimination, intolerance and religious fundamentalism.

That continues to be our teaching today.  Pope Francis has echoed Pope Benedict, stating that it is important to intensify the dialogue between Catholics and Islam.  He has emphasized “the great importance of dialogue and cooperation among believers, in particular Christians and Muslim, and the need for it to be enhanced.”  He has called for all Christians and Muslims to be “true promoters of mutual respect and friendship, in particular through education.”

I am grateful for the many examples of friendship that have been offered by the Muslim community in our region and we are committed to strengthening the relationship between the two communities.