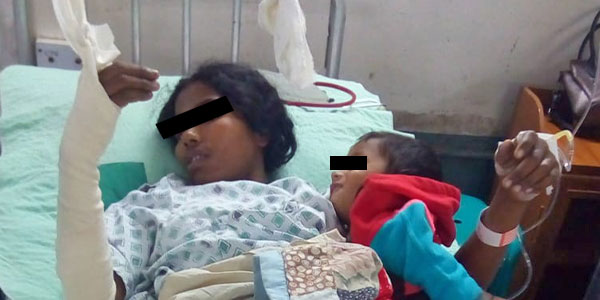 “Lord, forgive our persecutors” was the prayer a Rohingya Christian pastor posted on his Facebook page as a vicious attack against a tiny group of Rohingya Christians unfolded in Cox’s Bazar refugee camp in Bangladesh this week.

A raging mob of at least 100 Muslim Rohingya extremists seethed through the Christians’ vulnerable community. In the multiple attacks, one Christian went missing and at least twelve were seriously injured, needing hospital treatment, including several children.

A Christian man suffered a large gash to his head when the extremists pelted stones at the community’s bamboo-and-tarpaulin church. The building was completely destroyed. The attackers also slashed victims with knives, sprayed acid and attempted to set fire to buildings.

The attackers looted and destroyed the Christians’ frail and simple shack homes – made with mud or bamboo walls, roofed with corrugated metal or tarpaulin. At least 20 families were made homeless.

Instead of protecting them the camp security forces turned on the Christians, beating them and leaving one man unconscious.

Estimated at just a few hundred in the camp, Rohingya Christians are mainly converts from Islam. They are surrounded by nearly three-quarters of a million Muslim Rohingya and completely isolated from other Christians in Bangladesh. Their existence is unrecognized by other Rohingya, except as a group to be despised and rejected.

Rohingya Muslims are typically peaceful and tolerant, but Saudi influence has radicalized some.

Stirring up the violence against the Christians is an extremist group called the Arakan Rohingya Salvation Army (ARSA, formerly called Harakah al-Yaqin).

A local contact said violence against the group has “tripled” in the past week and pleaded for help. He called for a protected area to be provided for Christian Rohingya in the camp. Hindu Rohingya refugees in Bangladesh already have such protection. The Christians just want the same protection in the camp that Hindus have.

Barnabas Aid is working discreetly with Rohingya Christians to send emergency food aid, clothes, medical and other basic needs, as well as materials to rebuild their damaged or destroyed homes and church building.

A horde of hostility is encamped around this tiny group of hard-pressed Christians. Listen to their cries. Pray for their protection.