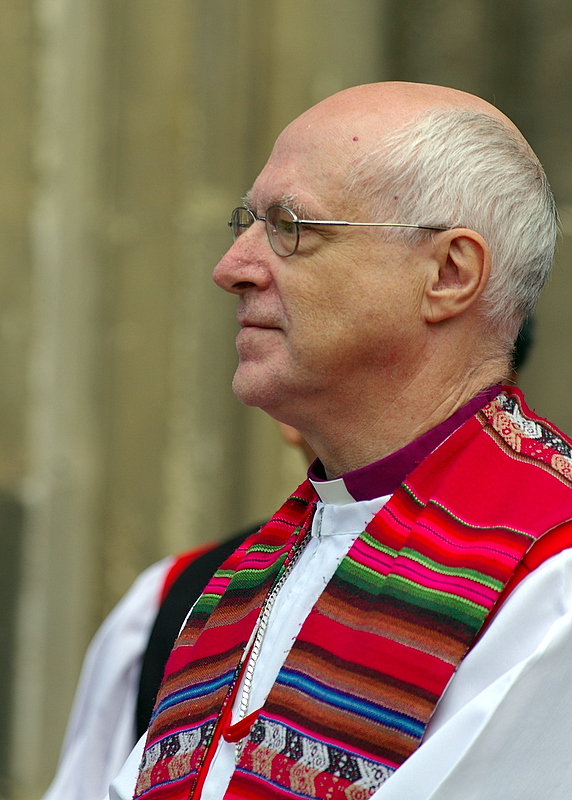 An Anglican Archbishop who is also a leading member of Gafcon has given an exclusive insight as to what went on at the Primates’ Meeting in Jordan which has just concluded.

Archbishop Greg Venables says he went to the gathering of global Anglican leaders – despite a letter approved at Gafcon’s Jerusalem conference last year urging its members not to – because he ‘felt a deep conviction’ that God wanted him there.

And he said many Primates at the meeting acknowledged there was an ‘inescapable truth’ that a split in worldwide Anglicanism would occur, but added: ‘We don’t know how to either avoid or accomplish it’. At the same time, he stated, the vast majority of Archbishops did not want to ’embrace innovations that go against the Bible such as same-sex marriage or the blessing of same-sex unions’.

He also revealed that discussions are taking place about whether Archbishops should select one of their own number to chair their gatherings – rather than having the Archbishop of Canterbury do so as at present.

Archbishop Venables is the Anglican Primate of South America. He lives in Buenos Aires, Argentina where he and his wife Sylvia have served as missionaries for the last forty-two years.

He is also a member of the Primates’ Council of Gafcon – which describes itself as ‘a global family of authentic Anglicans’. While some of that council decided as a matter of conscience they were unable to be present at a gathering which included liberal North American Archbishops, others, such as Archbishop Venables, didchoose to attend the summit in Amman, last week. It was his eighth such Meeting.

Speaking exclusively to Christian Today, Archbishop Venables spoke about why he went, what happened, what the atmosphere was like, the future of Anglicanism, and the communiqué issued at the end.

Some GAFCON Primates chose not to go the Primates Meeting a few days ago in Amman, Jordan. Why did you decide to go?

As on previous occasions, I felt a deep conviction that the Lord wanted me to be there. I pretty much have one priority and one message wherever I go and that is to preach the Gospel of Jesus Christ. Because of theological confusion from some Anglican Provinces pursuing another direction other than the Gospel, I followed the leading I sensed from the Lord to attend and went with the express commitment to speak the Gospel into the meeting.

How did you do that?

Simply by taking the opportunity to speak clearly whenever it arose and many others did the same. Everyone in the meeting was allowed complete freedom and most responded. The difference with previous meetings was not just this freedom but the attitudes displayed and the generous spirit which all shared. It was outstanding and all of this led to greater clarity and depth in the dialogue.

What did you sense was the tone of the conversation about the Gospel and Biblical faith?

There was no need to guess. The vast majority of the Primates in attendance were in agreement that we should preach Biblical, saving faith and not embrace innovations that go against the Bible such as same-sex marriage or the blessing of same-sex unions. Those are not the only problematic teachings, but they are often the presenting issue from those who do not conform to Biblical authority and the historic teaching of the Church.

As the meeting proceeded, more and more Primates made it clear that they would not go the way of the innovations, that they believed the ‘faith once for all delivered,’ [a reference to Jude in the New Testament]. I was particularly encouraged that almost all the new Primates – and there were 12 who were new – were very clear that they are orthodox.

If there were Primates talking about Biblical authority and orthodoxy, was there any indication from the liberal Provinces that they might back down from pursuing the innovations like blessing same sex unions?

Interestingly, the provinces where unbiblical practices have been permitted were clear that there was still a lot of orthodoxy in their regions.

So, they said that they would continue?

It wasn’t said like that. But we knew it to be unlikely that things would be reversed.

So how is it that the Communiqué made things sound like everything was OK?

That description was referring to the atmosphere and the honest and mature way with which people dealt with the contentious issues. Everyone was clear that the differences are fundamental and major, that we are in a broken state of communion and that we haven’t been able to find a way forward. We talked freely about how all attempts so far haven’t been followed through.

What kind of issues surfaced?

Regarding the way forward we considered, as we often do, the structures of the Communion and the Instruments of Communion and the difficulties encountered when differences arise. There was passing reference to the incongruity that the Archbishop of Canterbury is chosen by the English government and just presented to the Anglican Communion. Now some people are talking about a mechanism for the Primates to choose one of our number to be the Chair, but it would be a Chair that we pick. Archbishop Justin Welby even made reference to that when he first came into office, and his openness to it. We also talked about our identity as Anglicans.

We were all conscious of the awareness of the inevitability of some kind of a split in the Anglican Communion. We have already seen the reality of it in the formation of the ACNA [the Anglican Church of North America formed as a reaction against Episcopal liberalism] and the new Anglican Province in Brazil.

As encouraging as the solidarity of the orthodox Primates was, there was also sadness – which everyone recognized. Some of my friends who are close theological allies stayed away from the meeting out of conscience, namely [the Archbishops of] Nigeria, Uganda and Rwanda.

As many Primates commented on the inescapable truth that a separation is almost bound to happen, pretty well everyone in the room nodded and agreed. The biggest challenge was that we don’t know how to either avoid or accomplish it.

A key factor this time was that of our attitudes. Put simply, as a group, we have tried to move away from acrimony in personal relationships despite our disagreements. That does not diminish the vast differences in our theological positions, nor does it mean that there won’t ultimately be a divide. It is just the hope that we can do it with more kindness than was done with the Episcopal Church.

Photos with those with whom we don’t agree can reflect the kindness we hope to show to each other, but they should not be misunderstood to be interpreted that there is agreement or acquiescence on fundamental issues of Biblical faith.

As to the phrase about ‘walking together,’ I have been clear since 2016 that we are not walking together because some of our number are walking in different directions. People going in different directions cannot walk together by definition. Of course, there is a great desire for those going off in an unbiblical direction to repent and return, but failing that, we cannot walk together. We all desire to walk together, but increasingly we are recognizing that it is simply not going to be possible. We are however walking together in the sense of talking and seeking to find the correct way to deal with the brokenness.

In these renewed efforts to resolve the conflict and confusion in the Communion, this Scripture seems to be a very fitting prayer: ‘So Christ himself gave the apostles, the prophets, the evangelists, the pastors and teachers, to equip his people for works of service, so that the body of Christ may be built up until we all reach unity in the faith and in the knowledge of the Son of God and become mature, attaining to the whole measure of the fullness of Christ. Then we will no longer be infants, tossed back and forth by the waves, and blown here and there by every wind of teaching and by the cunning and craftiness of people in their deceitful scheming. Instead, speaking the truth in love, we will grow to become in every respect the mature body of him who is the head, that is, Christ,’ (Ephesians 4:11-15).

David Baker is a former daily newspaper journalist now working as an Anglican minister in Sussex, England. Find him on Twitter @Baker_David_A