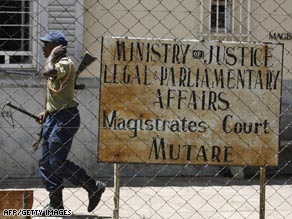 The Bishop of Manicaland has been granted bail after appearing this morning at the Mutare Magistrates Court. Judge Tendai Mahwe released the Rt. Rev. Erick Ruwona after the bishop posted a cash bomdl and ordered him to report to the Mutare police station once a week while the case was pending and not to seek to influence potential witnesses. The bishop and three co-defendants is charged with defrauding Agribank and the Diocese of Manicaland out of $750,000.

Prosecutor Tirivanhu Mutyasira stated the evidence would show Bishop Ruwona and his confederates had applied for a loan from Agribank on 20 Feb 2016 in the amount of $100,000 in order to build a church school. Church property was offered as collateral and the money was disbursed by the bank. That same month a second loan was taken out in the $350,000 from Agribank with church land offered as collateral and the money disbursed by the bank. An overdraft of $250,000 on the diocesan bank accounts was also paid by the bank. Mr. Mutyasira said the evidence would show that the bishop and his confederates stole the proceeds of the loans. He further stated that the evidence would show the bishop and his confederates had forged the minutes of past meetings of the diocesan standing committee to fraudulently and retroactively show the transactions were authorized by the diocese.

The Zimbabwe Anti-Corruption Commission issued a statement seeking to clarify news reports published after the bishop’s arrest, noting the accusations the bishop was exorting money from the parents of church school pupils was not part of the current investigation of the bishop.

The case continues with the next hearing scheduled for 29 Jan 2020.