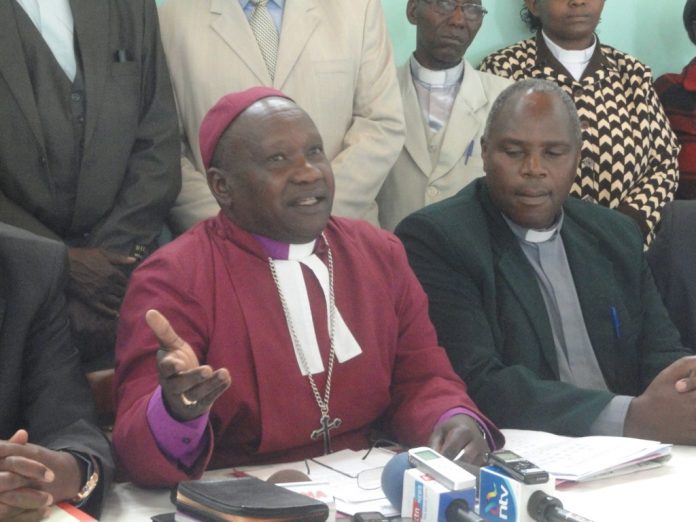 The long-running dispute between the Bishop of Mount Kenya West and three of his clergy has come to a close after a high court judge ratified an arbitration settlement awarding damages for defamation to the three priests.

On 7 Nov 2019 Justice Abigail Mshila awarded damages in the amount of eight months salary to the Ven. John Gachau and the Revs. James Maigua and Paul Warui. Their ordeal began in September 2015 when Archdeacon Gachua was summoned to the diocesan offices for a meeting of senior church leaders. When he arrived he was informed he would stand trial for sodomy.

Archdeacon Gachau told The Nairobian that he would be allowed to plead guilty or deny the charge, but would not be entitled to call any witnesses or prepare a defence. “I found this absurd since I was ambushed with this allegations and the hearing was being conducted in a swift fashion,” he recounted. He was then asked to wait outside whilst the 10-member tribunal considered the competing claims, and then was handed a letter informing him of his suspension. In 2004 the archdeacon came in second to Bishop Kagunda for election as bishop of Mount Kenya West.

The other clergy, supporters of the archdeacon, were also dismissed from office after summary proceedings. All vehemently denied the charges leveled against them.

They brought a complaint to the Kenyan Employment and Labour Relations board asking the state to order their reinstatement. After trial Justice Byram Ongaya sitting in Nyeri found a church tribunal presided over by the Rt. Rev. Joseph Kagunda had grossly abused canon law and natural justice in removing the three from their posts on allegations they had engaged in sodomy. On 10 Sept 2016 Justice Ogaya held the church violated canon law in terminating the priests, and questioned the veracity and motives of Bishop Kagunda, noting the offenses for which the clergy had been dismissed were violations of civil as well as church law — yet the bishop did not report the clergy to the police.

In July 2018 the three clergy were reinstated by the Anglican Church of Kenya, after Justice Nzioki Makau of the Labour Court in Nyeri ordered Bishop Kagunda to be jailed for contempt for not honoring the judgment. Justice Makau suspended his order after attorneys for the bishop said their client had not been properly joined in the case, and that the diocese would reinstatement the three. However, they appealed the amount of the judgment awarded to the three priests.

Justice Abigail Mshila of the Nyeri High Court ordered the parties to attend arbitration to resolve the dispute, where the diocese offering three months pay while the clergy sought three years pay. The agreement ratified by the court on 7 Nov 2019 awarded the clergy 8 months pay, full reinstatement to the parish ministry, no admission of guilt by either side, and each party bearing its own legal costs.

“This court reiterates that any payment made here is done as a favour and without legal obligations and the amount is but as compensation for injury to feelings and also to assist the plaintiff in getting back to their feet again,” the final judgment said. She further ordered the bishop to notify the diocese about the settlement and for the clergy to conform to the code of conduct laid down by canon law.