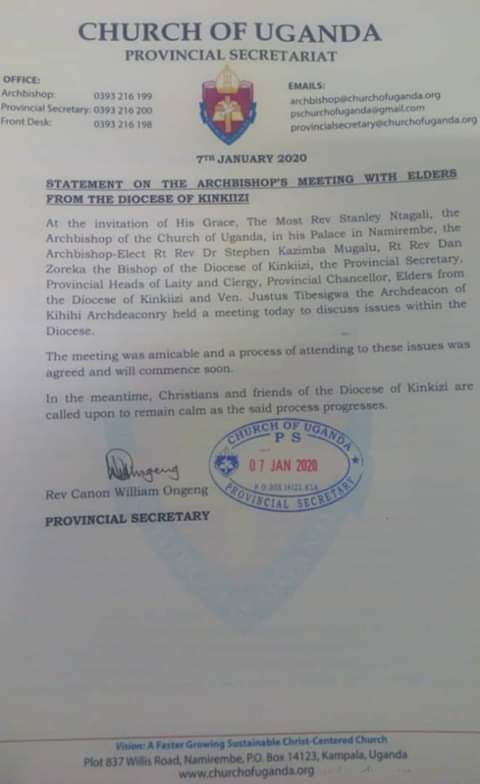 The Archbishop of Uganda has brought the warring factions within the Diocese of Kinkiizi to the Archbishop’s Palace in Kampala in attempt to resolve the dispute that has left the Archdeacon of Kihihi suspended and the Bishop of Kinkiizi accused of misconduct.

In a statement released on 7 January 2020, the Ugandan provincial secretary the Rev. Canon William Ongeng stated the Most Rev. Stanley Ntagali and his successor, the Most Rev. Stephen Kazimbi Mugalu, along with the provincial secretary and chancellor and heads of the House of Laity and Clergy, and Kinkiizi  elders met with the Rt. Rev. Dan Zoreka, the Bishop of Kinkiizi, and the Ven. Justus Tibesigwa, the Archdeacon of Kihihi.

The statement reported the meeting was “amicable and a process of attending to these issues agreed and will commence soon”. The archbishops asked members of the diocese to “remain calm” as the church conducts its review.

Archdeacon Tibesigwa was suspended on 26 Dec 2019 for misconduct, accused of conducting a wedding outside of church grounds, and for soliciting funds from overseas donors in the name of the diocese, but then misappropriating the funds.

The archdeacon’s suspension follows two petitions submitted to the archbishop by diocesan elders accusing the bishop of suborning perjury and financial misconduct.

On 10 Nov 2019 the Command 1 Post news website eported that aides of Bishop Zoreka had approached Archdeacon Tibesigwa’s maid and bribed her to claim falsely that her employer had poison in his home that was to be used to kill the bishop. However, when interrogated by police the maid admitted she had been paid to make the false claim.