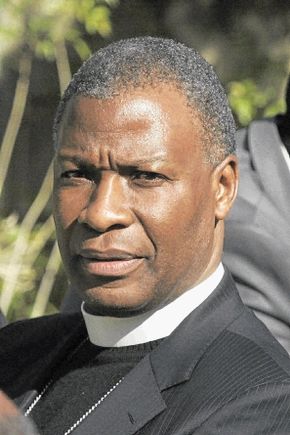 Archbishop Thabo today appealed for prayers for asylum seekers and refugees after being attacked by some of those who have taken refuge in Cape Town’s Central Methodist Mission (CMM).

“The key is to focus on their plight and how South Africa can be more welcoming,” he said in a comment released after visiting the mission’s church on Greenmarket Square.

The Revd Chris Nissen of the South African Human Rights Commission told the Mail & Guardian that some refugees had attacked him, a Congolese pastor and Archbishop Thabo. They had hit the archbishop and “threw bottles at him.”

The archbishop confirmed that he had been hit on the forehead. He told the Mail & Guardian, “We were clobbered… I have a bump on my head, but I’ll be alright…
“If I were to put on my psychologist’s hat, I would describe this as termination anxiety. We were delivering the hard truth. Things they didn’t want to hear. So they expressed some level of anger,” he added.

The newspaper’s report said the attack followed a reportback on options available to those who had occupied the church, which fell short of what they had been demanding.

The Revd Alan Storey of the CMM said in a report on the mission’swebsite that the group which met the refugees included the Human Rights Commission, the Africa Diaspora Forum, More than Peace, Archbishop Thabo and pastors to the refugee community.
“The hope was to inform everyone of the discussions that had taken place over the last week that had been facilitated by the South African Human Rights Commission as well for me to request that people begin to vacate the Sanctuary.

“The chair of the Human Rights Commission and myself were able to speak to everyone. But when one of the Pastors (known to the refugees) tried to speak – some people refused to allow him to do so and thereafter the Pastor and other members of the above-mentioned group were assaulted.

“A semblance of calm was restored with the help of some refugee leaders and many of the refugees intervening to protect people. Thereafter we were able to get members of the group out of the sanctuary into safety. It is very concerning that three people of this group were injured while everyone else is obviously in shock.

“The whole situation is very sad and troubling, not only because of where it took place or who was hurt, but because any violence anywhere against anymore is self-defeating. Violence does not solve anything. It just causes more hurt and more problems.”