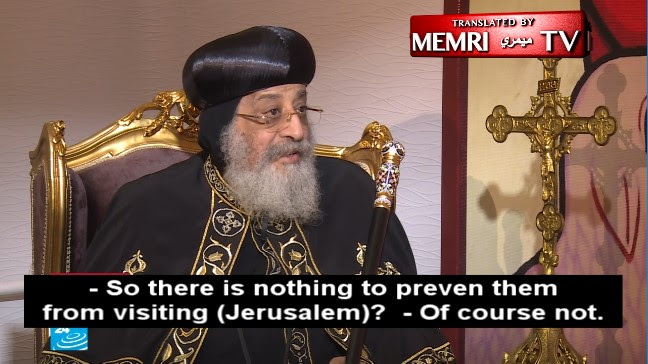 The Coptic Orthodox patriarch, Pope Tawadros (Theodore) II of Alexandria, has relaxed the prohibition on Egyptian Christians and Copts from visiting Israel. In a 14 Oct 2019 interview on France 24 Arabic TV, Theodore encouraged Copts to visit Jerusalem.

Israel is a country like any other country, he said, and expressed support for an agreement that would make Jerusalem an international capital, though he said that this is not possible given the current political reality.

And, in a break with other Christian Arab leaders, Theodore declined to place the blame for the conflict in the Middle East solely on Israel, stating that many groups and states bore collective responsibility for the dispute.

Interviewer: “You have visited Jerusalem, and you have said the preventing people from visiting Jerusaelm is meaningless. Do you encourage Copts to visit Jerusalem?”

Pope Tawadros II of Alexandria: “I encourage peace because distance hardens one’s heart. By getting closer to one another, we increase mutual understanding.”

Interviewer: “Your Holiness has given me a very diplomatic answer, but what does this mean in practical terms?”

Pope Tawadros II of Alexandria: “Indeed, there are visits [to Jerusalem], but on a limited scale…”

Interviewer: “[Is it allowed] in your opinion even though an Israeli visa is required?”

Pope Tawadros II of Alexandria: “[Israel] is a country just like any other country, and there are diplomatic relations between Egypt and Israel.”

Pope Tawadros II of Alexandria: “There are Copts who live in many countries – in Europe or America, for example – and they have citizenship in the countries where they live.”

Interviewer: “So there is nothing to prevent them from visiting [Jerusalem]?”

Pope Tawadros II of Alexandria: “Of course not.”

Interviewer: “What about the situation in Jerusalem today? You know that the U.S. acknowledged Jerusalem as the capital of Israel. Aren’t you worried about the [Christian] holy places there?”

Pope Tawadros II of Alexandria: “Obviously, I am worried about the holy places. The solutions that have been suggested over the years, in which Jerusalem would be [an international] capital serving the Jews, the Christians, and the Muslims under a special status… These are good solutions but I think that the ground is not ready for them yet.”

Interviewer: “What ground is that?”

Interviewer: “Who is responsible for that, in your opinion?”

Pope Tawadros II of Alexandria: “The responsibility is collective, not individual. It is the responsibility of many parties. The longer the Israeli-Palestinian conflict drags on the more complicated it becomes. But I think that good efforts are made in order to resolve this issue.”

Hear the back story of Sydney’s new Archbishop

Why I am (still) an Anglican Christian. Peter Hitchens interview with ‘The English Churchman’