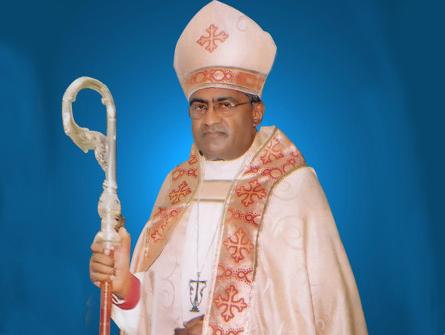 A foray into party politics by a retired Ceylonese bishop has earned him a rebuke from his colleagues.

His comments prompted the Bishops of Colombo and Kurunegala, the Rt. Rev. Dhiloraj Canagasabey and the Rt. Rev. Keerthisiri Fernando, to criticize their colleague  saying he had no authority to speak on behalf of the Church of Ceylon, especially in the polarized political atmosphere current on the island.

At a 5 Jan 2015 press conference Bishop Francis said he was stepping aside after having received threats from Tamil groups living overseas, who objected to his support of the Sinhala-dominated government.

Bishop Francis told the press conference: “I value and stand for the unitary state and sovereignty of the country. I came under pressure from the Diaspora groups due to my position in this regard despite being a Tamil priest.  They asked me why I had taken up such a position instead of speaking for the rights of minorities. I have two options – to resign from my priesthood or to embrace their agenda. I will stick to my position. That is to appear for the unitary state and sovereignty of the   country. This is what we have achieved after 30 years of war. I will quit my position as the Bishop of the Kurunegala Diocese to serve the interests of the country.”

However, in his statement announcing the resignation of Bishop Francis, the Archbishop of Canterbury said he had asked the bishop to resign in connection to charges of financial misconduct. The Lambeth Palace statement said:

“The visit by Bishop Shanta to Canterbury last week was to consider with him the various options for dealing with his position as a bishop who had voluntarily stood down following numerous complaints that he brought his Church and ministry into disrepute. A particular cause of concern was his involvement in unresolved criminal proceedings relating to misappropriated pension funds. Members of his own Diocesan Standing Committee had requested that he should resign, and he agreed to do so.”

Bishop Francis’ politicking on behalf of the ruling party played no part in the push to remove him. Lambeth Palace added: “Any suggestion that the Church of Ceylon or Archbishop of Canterbury is seeking to influence the outcome of the forthcoming presidential election is categorically untrue.”

In their statement released this week, the Ceylonese bishops wrote:

“It is significant to note that shortly before the Presidential Election in 2015 as well, the said Bishop made certain unauthorised utterances, which prompted the Metropolitan of the Church of Ceylon (the Archbishop of Canterbury), to issue the statement referred to above.”

“The Church of Ceylon notes with serious concern that in a similar manner when a presidential election is pending, Bishop Greg Shantha Kumar Francis has ventured to make utterances of the same nature. The church of Ceylon unreservedly condemns this act.”