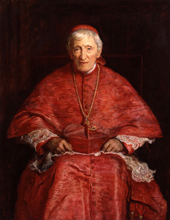 When Pope Francis canonises Cardinal John Henry Newman [13 Oct 2019], the first Briton to be declared a saint in over forty years, it will be a cause of celebration not merely in the United Kingdom, and not merely for Catholics, but for all who cherish the values by which he was inspired.

In the age when he lived, Newman stood for the life of the spirit against the forces that would debase human dignity and human destiny. In the age in which he attains sainthood, his example is needed more than ever – for the manner in which, at his best, he could advocate without accusation, could disagree without disrespect and, perhaps most of all, could see differences as places of encounter rather than exclusion.

At a time when faith was being questioned as never before, Newman, one of the greatest theologians of the nineteenth century, applied his intellect to one of the most pressing questions of our era: what should be the relationship of faith to a sceptical, secular age? His engagement first with Anglican theology, and then, after his conversion, Catholic theology, impressed even his opponents with its fearless honesty, its unsparing rigour and its originality of thought.

Whatever our own beliefs, and no matter what our own tradition may be, we can only be grateful to Newman for the gifts, rooted in his Catholic faith, which he shared with wider society: his intense and moving spiritual autobiography and his deeply-felt poetry in ‘The Dream of Gerontius’ which, set to music by Sir Edward Elgar – another Catholic of whom all Britons can be proud – gave the musical world one of its most enduring choral masterpieces.

At the climax of ‘The Dream of Gerontius’ the soul, approaching heaven, perceives something of the divine vision:

It floods me, like the deep and solemn sound

Harmony requires difference. The concept rests at the very heart of Christian theology in the concept of the Trinity. In the same poem, Gerontius says:

Firmly I believe and truly

God is three, and God is One;

As such, difference is not to be feared. Newman not only proved this in his theology and illustrated it in his poetry, but he also demonstrated it in his life. Under his leadership, Catholics became fully part of the wider society, which itself thereby became all the richer as a community of communities.

Newman engaged not merely with the church, but with the world. While wholeheartedly committed to the Church to which he came through so many intellectual and spiritual trials, he nonetheless initiated open debate between Catholics and other Christians, paving the way for later ecumenical dialogues. On his elevation to the Cardinalate in 1879, he took as his motto Cor ad cor loquitor (‘heart speaks to heart’), and his conversations across confessional, cultural, social and economic divides, were rooted in that intimate friendship with God.

His faith was truly catholic in that it embraced all aspects of life. It is in that same spirit that we, whether we are Catholics or not, can, in the tradition of the Christian Church throughout the ages, embrace the unique perspective, the particular wisdom and insight, brought to our universal experience by this one individual soul. We can draw inspiration from his writings and his life even as we recognise that, like all human lives, it was inevitably flawed. Newman himself was aware of his failings, such as pride and defensiveness which fell short of his own ideals, but which, ultimately, left him only more grateful for the mercy of God.

His influence was immense. As a theologian, his work on the development of doctrine showed that our understanding of God can grow over time, and had a profound impact on later thinkers. Individual Christians have found their personal devotion challenged and strengthened by the importance he attached to the voice of conscience. Those of all traditions who seek to define and defend Christianity have found themselves grateful for the way he reconciled faith and reason. Those who seek the divine in what can seem like an increasingly hostile intellectual environment find in him a powerful ally who championed the individual conscience against an overwhelming relativism.

And perhaps most relevantly of all at this time, when we have witnessed too many grievous assaults by the forces of intolerance on communities and individuals, including many Catholics, because of their beliefs, he is a figure who stood for his convictions despite the disadvantages of belonging to a religion whose adherents were denied full participation in public life. Through the whole process of Catholic emancipation and the restoration of the Catholic Church hierarchy, he was the leader his people, his church and his times needed.

His capacity for personal warmth and generous friendship is shown in his correspondence. There exist over 30 collected volumes of his letters, many of which, tellingly, are not addressed to the fellow intellectuals and prominent leaders but to family, friends and parishioners who sought out his wisdom.

His example has left a lasting legacy. As an educator, his work was profoundly influential in Oxford, Dublin and beyond, while his treatise, The Idea of a University, remains a defining text to this day. His often overlooked labours on behalf of children’s education are testimony to his commitment to ensuring those of all backgrounds shared the opportunities learning can bring. As an Anglican, he guided that church back to its Catholic roots, and as a Catholic he was ready to learn from the Anglican tradition, such as in his promoting the role of the laity. He gave the Catholic Church renewed confidence as it re-established itself in a land in which it had once been uprooted. The Catholic community in Britain today owes an incalculable debt to his tireless work, even as British society has cause for gratitude to that community for its immeasurably valuable contribution to our country’s life.

That confidence was expressed in his love of the English landscape and of his native country’s culture, to which he made such a distinguished contribution. In the Oratory which he established in Birmingham, and which now houses a museum dedicated to his memory as well as an active worshipping community, we see the realisation in England of a vision he derived from Rome which he described as ‘the most wonderful place on Earth’. In bringing the Oratorian Congregation from Italy to England, Newman sought to share its charism of education and service.

He loved Oxford, gracing it not only with passionate and erudite sermons, but also with the beautiful Anglican church at Littlemore, created after a formative visit to Rome where, seeking guidance on his future spiritual path and pondering his relationship with the Church of England and with Catholicism, he wrote his beloved hymn, ‘Lead Kindly Light’. When he finally decided to leave the Church of England, his last sermon as he said farewell to Littlemore left the congregation in tears. It was entitled ‘The Parting of Friends.’

As we mark the life of this great Briton, this great churchman and, as we can now say, this great saint, who bridges the divisions between traditions, it is surely right that we give thanks for the friendship which, despite the parting, has not merely endured, but has strengthened.

In the image of divine harmony which Newman expressed so eloquently, we can see how, ultimately, as we follow with sincerity and courage the different paths to which conscience calls us, all our divisions can lead to a greater understanding and all our ways can find a common home.

His Royal Highness
The Prince of Wales