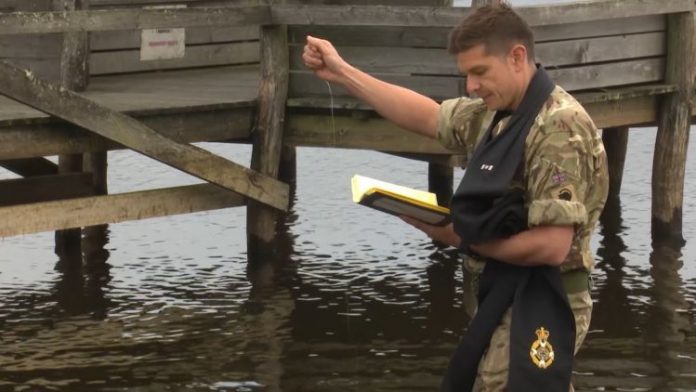 Padre Ben Norton, Chaplain from 4th Battalion the Yorkshire Regiment, is no stranger to doing baptisms in unusual places.

In his civilian job at a ministry in Hull, he does not have a church.

“We use inflatable tubs in the back garden,” he said.

Padre Norton is known as a ‘pioneer minister’ – a reverend without a church.

“A pioneer minister is someone who works for the Church of England, but rather than working inside the church, I am just given a blank sheet of paper and asked to start from scratch.”

His job is to create a faith community and space for people to begin their religious journey.

During an exercise in Denmark with 4 YORKS, Padre Norton was asked to perform a baptism on Private Tyler Shiroda, who works as a lorry driver and is reservist with the regiment.

The location of the baptism was a Danish lake.

“There is a long history within the Royal Army Chaplains of baptising soldiers out on exercise or in theatre, or whenever the moment is,” said Padre Norton.

After a cold dip in the lake to officialise his baptism, Private Shiroda said his wife was “definitely going to be surprised”, as the pair had often talked about taking the sacrament together.

“I am going to have to break the news to her than I have been done before!”

Speaking after the service, Padre Norton said it was “special” to baptise Private Shiroda in “such a beautiful setting”, on the shore of a Danish lake.

After the service, reservists from 4 YORKS returned to the training area to continue working on Exercise Viking Star.