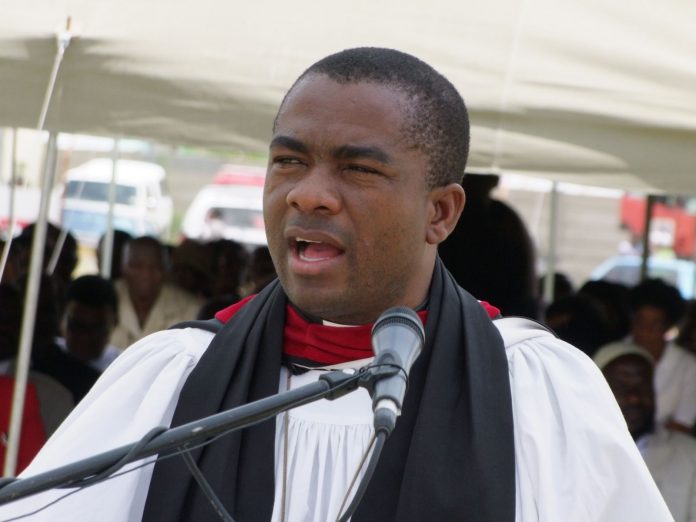 On the 6th October 2019, Rev. Lukas Kaluwapa Katenda was ordained as the Second Bishop of the Reformed Evangelical Anglican Church (REACH) in Namibia. He was consecrated by Bishops Glenn Lyons (Presiding Bishop), Njabulo Mazibuko (Area Bishop of KwaZulu-Natal) and Alan Noble (Area Bishop of Western Cape and Free State).

Joyous celebrations and congratulations from all over the country marked the day. It was also a significant event in defining the relationship of the Anglican Church in Namibia.

Since the passing of Bishop Peter Kalangula in 2008, REACH Namibia has been without a bishop for ten years. After a serious conversation with CESA about the state of affairs in the Global Anglican Communion,  Ngubane Katenda (then a priest in the Diocese of Namibia) transferred his orders to REACH-SA Bishops, and became the leader of REACH-Namibia since 2017, leading to becoming its Second Bishop, this past Sunday.

Katenda’s transfer was also during a period of leadership turmoil in the Anglican church, which has not yet healed. Since he took lead of REACH in Namibia, the ‘gospel-centred’ movement has expanded, now with fourteen churches countrywide. Clergy have also moved away from the Diocese of Namibia to join REACH, escalating tensions. While some within the mainstream see REACH as existing because of power struggles, Bishop Katenda is adamant to point out that the issue is over the gospel and not status.

The Diocese of Namibia, collectively, has remained undecided and silent in the ongoing debate on same-sex relationships and ordination of gay and lesbian priests/priestesses. Rev. Katenda believes that the Diocese of Namibia needs a serious formulation of its place and to pronounce itself clearly. He holds that so far, the discussion on same-sex unions and ordination of such priests is shallow and does not allow critical biblical and theological debate on the issue. REACH Namibia believes that such silence betrays the message of the gospel in place of a union that has no roots in Scripture.

In line with the above discussion, the GAFCON Primates Council meeting convened in Sydney mid 2019, proposed the idea of a separate Anglican jurisdiction. This would also imply that REACH – SA become an official Province of GAFCON and not just a branch, as it is the case now. In the search for both a biblical and spiritual reformation in the Southern African Anglican Church, REACH-SA seems positioned to be the leading force without having to reinvent the wheel in terms of Anglican jurisdictions. For the Namibian Church, the need for vibrant, meaningful and biblical Christian community cannot be overemphasised. The present division reflects inadequate biblical and theological commitment to truth claims in belief and conduct. Thus, the call for unity in the Anglican Church of Namibia should be on the basis of the gospel and must counter beliefs and practices that promote love without truth, and ordination to ministry without godly discipline.

We do not know what the future holds for the Anglican Church in Namibia. However, we must pray for the removal of the present hostility. At a deeper level, the wider Namibian Anglican community needs to come to an understanding of the gospel if it is to be an effective witness. Our hope is for a reunited Anglican Church in Namibia that would take a firm stand in the midst of alternatives that seek to weaken the cause of the gospel.