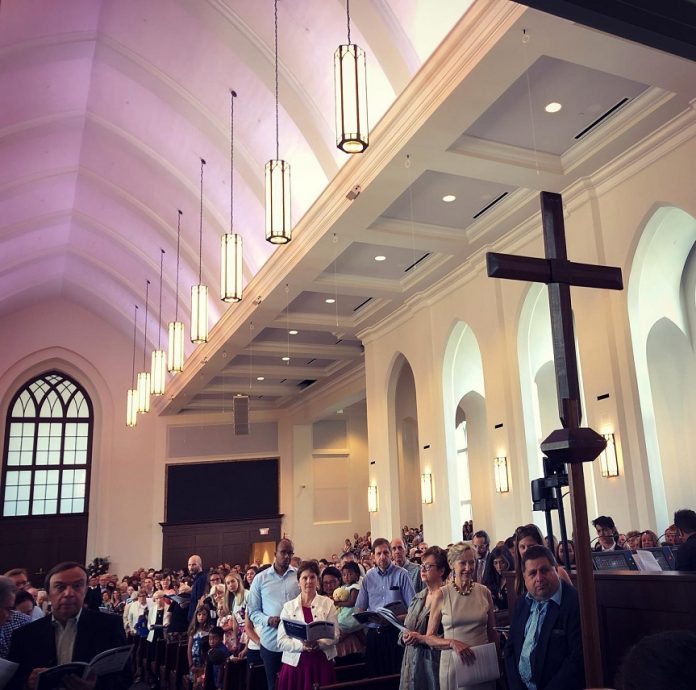 Homeless for seven years, following the loss of a $40 million 250-year-old historic church property in litigation with the Episcopal Church, a prominent Anglican Church in North America (ACNA) parish moved into its new home this week.

The congregation of the Falls Church Anglican (TFCA) in Falls Church, Virginia, celebrated a consecration service and dedication of their new sanctuary on Sunday, September 8. Since separating from the Episcopal Church in late 2006, the congregation has planted eight congregations across the metropolitan Washington, D.C. area and in three other Virginia cities.

TFCA is one of the larger congregations within ACNA, reporting 2,194 members in 2018, with an average principle service attendance of 1,274 and operating income of $6.3 million. The church’s daughter congregations reported a combined membership of 1,481 and an average attendance of 1,548 the same year. According to a 2015 congregational brochure, the existing property (which includes a multistory office building) cost $31 million, with an additional $23 million for new construction on the site. The new sanctuary seats between 900 and 1,000 people.

TFCA’s congregation has been, as Rector Sam Ferguson put it, “tabernacling” for seven years, migrating between three separate office spaces and even more worship sites. Walking into a new church home after many years in borrowed space is significant.

From 2001-2009, I was a member of TFCA, joining a group of approximately 70 people in 2009 sent out to plant an Anglican congregation in neighboring Arlington. I still have many friends there, with whom I shared conversations amidst Episcopal Church denominational turmoil and eventual Anglican realignment.

In May of 2012, I returned to the church for its final worship service in the historic property. The service featured spirited singing of Martin Luther’s “A Mighty Fortress is our God,” and celebrated the many daughter congregations that TFCA had planted since a congregational vote to depart the Episcopal Church. As one longtime TFCA member prayed aloud that night, she was grateful that “the church planter is now the church planted,” and was trusting God to lead them in a new and uncertain season.

At a standing-room-only 8:45 a.m. service this Sunday in 2019, Ferguson noted that the Bible has many examples of people displaced for a season. God providentially engages his people in an activity or period of renewal that otherwise might not have occurred.

While TFCA’s new campus is only one mile south of the historic Falls Church building, the move already does seem strategically significant. The new site is adjacent a booming immigrant populations who populate the church’s English for Speakers of Other Languages (ESOL) program. Likewise, the new building is a visible landmark along a well-traveled commuter artery from suburban Fairfax County into Washington, D.C.

To be candid, church buildings do matter. They serve as missionary outposts in the communities that church congregations seek to minister amongst. While the buildings themselves are not “the church,” they establish a physical presence in a community. For Anglicans and other Christians in historic, liturgical traditions, setting is important.

I exited the early service to make room for a second, 11:15 a.m., crowd which welcomed international guests from across the worldwide Anglican Communion, the third-largest global family of churches. A friend pointed to a beautiful arrangement of flowers with a note of encouragement from the nearby Roman Catholic high school that hosted many of TFCA’s worship services during the past seven years. It was a touching reminder of the many Christians who welcome Anglicans during their time away from their former church homes. Locally, Roman Catholics, Baptists, Presbyterians, Lutherans and Evangelicals shared their spaces with the large Falls Church congregation that had many programs, but no property to house them in. It was a visible sign of an “ecumenism of the trenches,” in which the household of God joined together to provide during a time of need. Every other Anglican congregation I have spoken with has similar stories. Never before has our church life been so visibly international and ecumenical.

Sunday was also an important day at my own congregation, as we celebrated our one-year anniversary and our first membership Sunday. I am a member of Incarnation Anglican Church in southern Arlington, Virginia, which is TFCA’s first “granddaughter” congregation (we were planted in 2018 by Restoration Anglican Church in northern Arlington, which was itself planted by TFCA in 2009).

During the service, our vicar preached on the importance of inviting the Holy Spirit into our lives and asking for spiritual gifts. While I personally come from a broad church Episcopal background, the charismatic emphasis of my pastor is something I greatly appreciate. Encounter with the person of the Holy Spirit is a common theme across my Anglican diocese.

Just as at TFCA’s consecration, it is our hope at Incarnation that we increase both numerically and in the knowledge and love of Jesus Christ. Just as at TFCA, there was a buzz as we took vows of membership and signed a church register.

“We are God’s living stones whom he is shaping and configuring into his holy temple,” Ferguson preached earlier that day. “You can imagine it is one thing to build a beautiful building out of bricks and mortar. It is altogether another thing to build a unified and holy people. We are far harder to work with.”

How fitting. God is indeed full of surprises.

Ferguson’s sermon can be viewed in its entirety here: