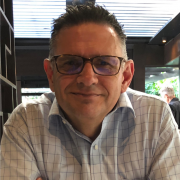 An announcement from the Diocese of Bathurst:

“We look forward to the Rev’d Mark Norman Calder’s consecration as a Bishop in the church of God, 7pm Thursday 21 November in St Andrew’s Cathedral, Sydney and installation, 11am Saturday 23 November at All Saints Cathedral, Bathurst.

Mark was born in Broken Hill, when his parents were running the BCA hostel. Moving to Sydney and settling in Eastwood, he attended Eastwood Primary school and Epping Boys High. After 6 years working in the television industry, he studied at Moore College from 1984-87. Following nearly four years working as an assistant minister – first at Lalor Park and then at North Sydney – he was appointed rector of St Andrew’s Roseville in September 1991. During this time, he served on the council of the northern region of the diocese, the Anglican Media Council, the council of Shore school and on the standing committee of the diocese.

He became rector of Noosa on the Sunshine Coast in the diocese of Brisbane in November 2009. Wanting to learn from other traditions within the Anglican church, he immersed himself in the life of the diocese, serving at various times as area dean, diocesan nominator, General Synod rep and member of the council of St Andrew’s Anglican College Peregian Springs. Concurrent with his appointment at Noosa, he served for four years as priest-in-charge of the neighbouring parish of Cooroora.

Mark enjoys his family, God’s glory in creation, many aspects of today’s technology and long drives!

Mark communicated his desire for the diocese of Bathurst in this way:

My prayer is that under my leadership, the Diocese will grow communities of faith, full of people who have confidence in their forgiveness through the life, death and resurrection of the Lord Jesus, and joyful assurance of spending eternity with God by his grace. I trust that in every city, town and village, the Anglican church is known and loved, present in the community and valued for its contribution. I pray that as a result, more and more people will become disciples and grow strong and clear in their relationship with the Lord Jesus, to the glory of God.”