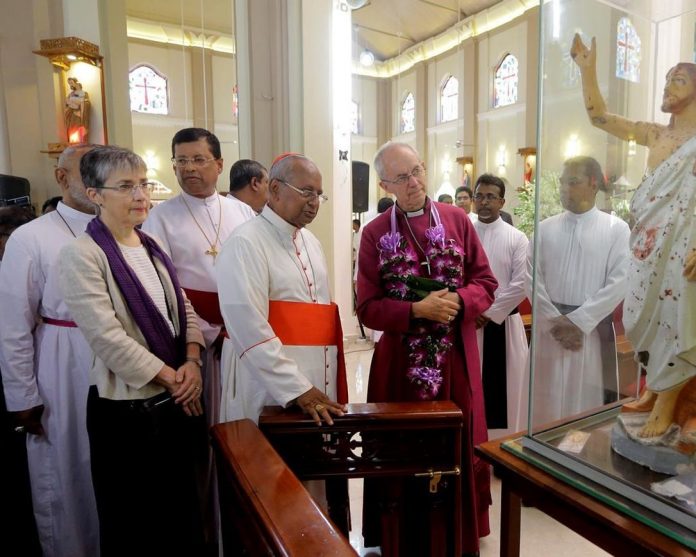 The spiritual leader of the worldwide Anglican Communion began a three-day visit to Sri Lanka on Thursday, paying homage to the memory of the victims of the Easter Sunday terrorist attacks.

Three churches and four hotels were targeted in a series of coordinated attacks by 7 suicide bombers on April 21, which killed 263 people.  Most of the casualties were from St. Sebastian’s Church, where more than 100 died.  The other churches hit were St. Anthony’s Shrine in Colombo and the Evangelical Zion Church in the eastern coastal city of Batticaloa.

“When they come to kill us do they ask if we are Anglicans, Pentecostals, Presbyterians or Catholics? They ask only if we are Christians,” Archbishop Welby said in his speech, quoting Pope Francis.  “So when on Easter morning I heard of the terrible events in this church and other places in Sri Lanka, we knew that our sisters and brothers have been killed and wounded and we observed silence and prayed for you,” he told the congregation.

Christ covered in our blood

Archbishop Welby who was welcomed by Cardinal Malcolm Ranjith, the Archbishop of Colombo, knelt and bowed down on a spot of the glass-covered tiled floor where the suicide bomber set off the explosives at the Easter Sunday Mass. The pockmarked area is preserved as a memorial.

“When I see this statue, this image of Christ covered with the blood of the martyrs,… I see the true Christ,” the Anglican archbishop said pointing to a blood-splattered statue of the Risen Christ kept in a glass case.  “Not the Christ who is distant and clean but the Christ who is covered in his own and our blood,” he said and thanked Sri Lankan Christians for their restraint after the carnage.

“To come before you, I am almost without words; for I can only say thank you to the Christians of Sri Lanka,”  Archbishop Welby said.  “We know that the Christ who on the cross said ‘Father forgive’ knows your anger, your pain, your sorrow and we know that through His resurrection even that anger and sorrow and pain will be transformed in purity to hope,” he said.

He also laid white roses near a plaque with the names of those killed.

Among the appointments of Archbishop Welby during the August 29-31 visit are meetings with Prime Minister Ranil Wickremesinghe and President Maithripala Sirisena, and a service in the Anglican cathedral in Colombo.

With some 85 million members in more than 105 countries, the Anglican Communion is one of the largest Christian Churches.