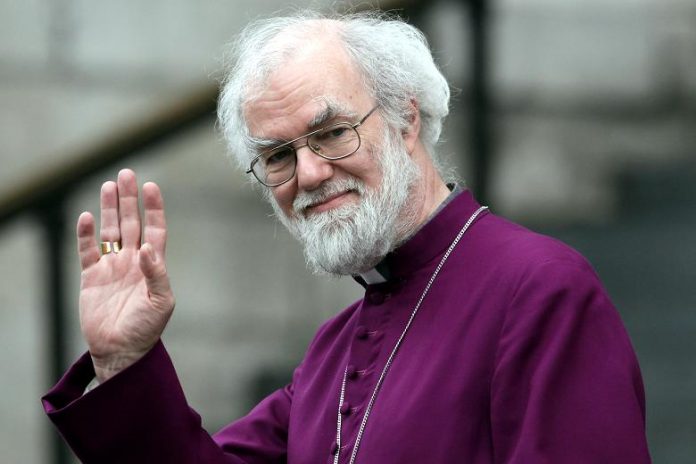 The former Archbishop of Canterbury, Rowan Williams, has given his support to campaigners who will be taking action to stop the Defence & Security Equipment International (DSEI) arms fair in London. The arms fair  will take place at the Excel Centre in East London between 10-13 September.

DSEI will bring over 1600 exhibitors together with military delegations from around the worlds. The guest list for DSEI includes military delegations from 67 countries, including representatives for a number of dictatorships and human rights abusing regimes; Saudi Arabia, Uzbekistan, Philippines, Egypt, United Arab Emirates, Hong Kong, Israel, Turkey and Bahrain. All delegations have been invited by the UK Government.

DSEI will be met with large-scale protests, with thousands expected to take part. A week of action has been called for next week to stop the armaments from reaching the venue. Full details of the planned protests can be found here. There will also be other actions happening during the week of DSEI.

The former Archbishop of Canterbury, Rowan Williams, said: “The way much of the arms trade currently works continues to be a blot on the global moral landscape.  Governments have been negligent or collusive about the role played by arms exports in sustaining brutal and even genocidal conflicts, and the recent court judgement about arms exports to Saudi Arabia has highlighted the issue.

The principles of ethics and international law need to be defended more robustly than ever in a world where local wars of great savagery are fuelled by what often seems to be willfully irresponsible attitudes, and I welcome this fresh effort to alert citizens to the cost of indiscriminate, profit-driven trading in weapons of death and mutilation.”

Other faith leaders have voiced their opposition to DSEI. On Tuesday September 03, representatives of all faiths and none will unite for ‘No Faith in War’, a day of faith-based activism against the arms fair. It will take place outside the Excel Centre. Full details can be found here.

Rabbi Herschel Gluck OBE, said: “As a Jew, I definitely find war, those that cause war, and the weapons – tools – of war despicable and horrific. Our Talmudic Sages teach us that Peace is the key and source of all blessings from G-d. As a people who constantly pray and yearn for the coming of Moshiach (Jewish Messiah), we see the eradication of conflict as being an essential part of the ultimate good that every human being, and humanity as a whole, should constantly strive for, and work towards its realization. We are enjoined not just “to give peace a chance”, but to “desire peace and to pursue it”. May we all work towards this and realize this, our goal!”

The Rt Revd Paul Bayes, Bishop of Liverpool said: “I have no faith in war. For over fifty years I have been a Christian and as such I follow the Prince of Peace and the God of love. Glamourising and commercialising the instruments of death is not the Jesus way.”

Bishop David Walker, Manchester said: “At this time when the world’s arms manufacturers are preparing to display their wares here in London, I’m delighted to know that Christians are gathering together to engage in a display of a rather different sort. Tensions both between and within nations, will not be resolved by simply manufacturing ever more complex and deadly weaponry. May God bless you in your act of witness.”