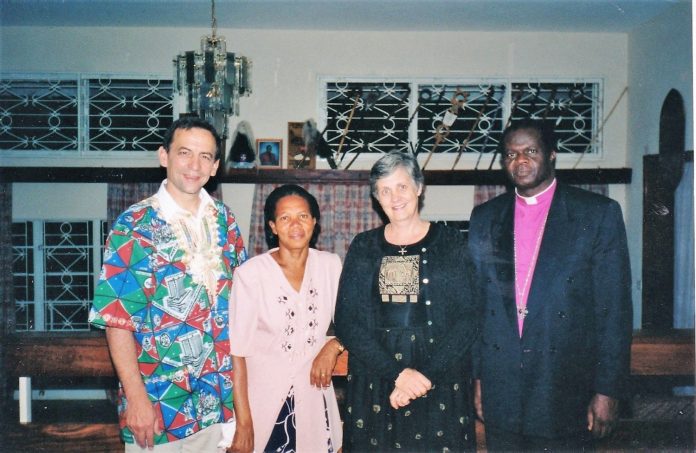 On the last Sunday in June 1999, I preached a sermon at the chapel of Uganda Christian University. My wife Peggy and I were on an exploratory trip, our first ever to Africa, to look at theological colleges in Uganda and Kenya. What we did not realize was that the University – and God – were exploring us!

We were aware that UCU was interested in my coming as Vice Chancellor (President) of the new university – I had spoken two years previously with Archbishop Livingstone Nkoyoyo – but I did not think seriously about the idea, and Peggy went, as she said, convinced we would discover why we should not go.

The assigned text that Sunday evening was the story of the rich young man who came to Jesus asking: “Teacher, what good deed must I do to have eternal life?” (Matthew 19:16). Jesus concluded the conversation with a challenge: “If you would be perfect, go, sell what you possess and give to the poor, and you will have treasure in heaven; and come, follow me” (verse 21). Viewing me from the back of the chapel, Peggy found herself thinking: “Well, he’s not young, but then he’s not old either, and we’re not rich by Western standards, but perhaps we are, here in Africa.”

God touched my heart that night as well and we lay awake talking about it. Then Peggy, somewhat desperately, wondered if they had planted that reading for a purpose, and she said: “If they did, I could never trust them.” She turned on the light, checked her Episcopal lectionary and found out – sure enough – there was another reading assigned for the day. It was from Matthew 10, where Jesus says:

This verse spoke to her heart in particular, as we would be leaving our five children, our youngest just going off to college. So she persevered: “Well, I still can’t trust them if they changed the lessons on us!” The next day we visited All Saints’ Cathedral in Kampala, and Peggy asked if they had a bulletin from the day before. They did, and the lesson was from Matthew 19, following the English, not the American lectionary.

“Only on the evidence of two witnesses or of three witnesses shall a charge be established,” the Bible says. And now we had two witnesses from God’s Word. That did not settle things finally. We continued our trip, interviewed at the University, came home and spent two months praying and consulting colleagues and family. By September, we were resolved, and I wrote the Archbishop, saying we would come. And our lives were changed and enriched in ways we could never have imagined.

On this twentieth anniversary, we give thank God for giving us a clear sign through His Word.