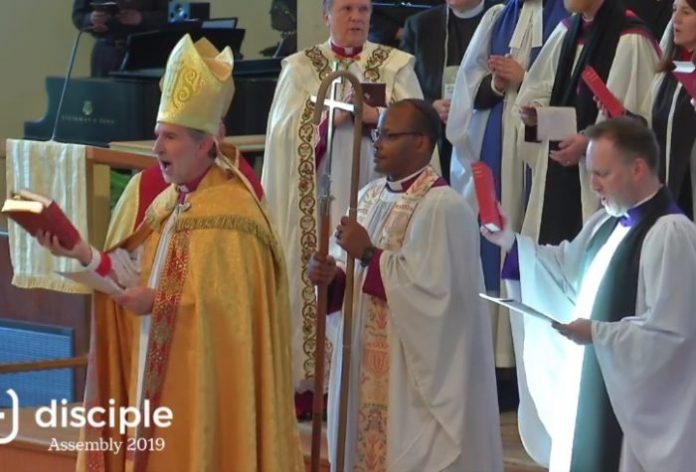 One decade after the Anglican Church in North America (ACNA) was inaugurated, Anglicans returned to Plano, Texas to release a revised Book of Common Prayer (BCP) and hear presentations on Christian discipleship.

Much like previous Provincial Assemblies, this one was characterized by the participation of Global South bishops exhorting adherence to orthodoxy amidst cultural headwinds. ACNA also continues to be shaped by constituent groups with significantly differing churchmanship. During the opening Assembly Eucharist, bishops clad in cope and mitre sang contemporary worship songs including Hillsong Music’s “Who You Say I Am”, a juxtaposition that seemingly only ACNA could facilitate.

Assembly participants also heard from the Rev. Anthony Thompson, an Anglican priest and husband to Myra Thompson, one of nine killed at Charleston’s Emanuel A.M.E. Church in 2016. Thompson’s forgiveness of assailant Dylann Roof and call for repentance at an initial bond hearing made headlines in the secular press.

Revisiting a decade of ministry together, ACNA leaders identified the hand of the Lord as present in a project providentially uniting unlikely partners in ministry.

In his opening address, Archbishop Foley Beach listed the planting of hundreds of churches, ministry among the poor and marginalized, and the sending of missionaries as key achievements, alongside building campaigns and the new BCP.

“It’s really quite amazing. Actually, miraculous,” assessed Beach. “To God be all praise and glory.”

But Beach charged that the calling of believers is not to plant or grow churches, lead “incredible worship,” or publicly stand for what is right, as good as those things are.

“Our calling from Jesus is to go and make disciples,” Beach summarized, comparing new Christians to infants that must be cared for, loved, fed, cleaned, disciplined and nurtured until such a time that they may walk on their own. “The Kingdom of God is similar: we need to be taught how to walk the walk.”

Such instruction includes how to worship, pray, study the Bible, hear the Lord, and love neighbors, as well as what the scriptures say about Jesus, serving, and what is right or wrong.

“How do I walk in the Holy Spirit when the bottom drops out in my life?” Beach offered as an example. “Discipleship cooperates with the Holy Spirit to help us follow Jesus in the midst of our life situation.”

Discipleship is caught, not just taught, Beach insisted: it is a lifestyle shared.

The Archbishop and former youth pastor spoke of learning from spiritual mentors about how to seek God for God himself, not just for what God can give, and how to love God, not just love what God does for him. Repentance, he learned, is a lifestyle, “not a one-act play.”

Recounting the experience of a friend in prison ministry, Beach recalled that upwards of 95 percent of the violent offenders had sat in church and prayed the sinner’s prayer.

“What happened? Why didn’t it take?” Beach asked. “Could it be that no one had ever invested in their walk with the Lord, and they never became discipled? They had made a decision for Christ, but they had never become a disciple of Christ.”

Similar themes permeated the closing address by Rwandan Archbishop Laurent Mbanda, who called for renewed commitment to the Great Commission.

Mbanda recalled that in the 1994 Rwandan genocide, churches were sites of massacres, and most of the killers claimed a Christian faith, with even pastors implicated in the killings.

“There had been many converts, but they had not been mentored, equipped and discipled to live like Christ,” Mbanda assessed. “A renewed understanding and commitment to our call to the Great Commission was needed.”

“Are you in, or are you out? Are you joining, or are you just going to watch and observe? It is our time, and the Lord has given us an opportunity, let us take advantage of it. Let us use it for his glory. Let us proclaim Christ unashamedly.”

Push Back Against False Narratives

“A lot of people have really toxic narratives about God,” reported Smith. “We live at the mercy of ideas. We get an idea about something and it runs our life — or it ruins our life.”

Quoting author A.W. Tozer that “the most important thing about a person is what they think about God,” Smith, who teaches at Friends University, cited a study reporting that 38 percent of respondents viewed God as an angry judge who is poised to punish.

“Jesus destroyed a false destructive narrative about God and replaced it with true stories about God,” Smith stated, recalling the account in John chapter 9 of the man born blind to glorify God, not due to his or his parents’ sin.

Spiritual disciplines, Smith explained, are opportunities for God’s grace to move within us: “We’re creating space for God to act. These are things we can do that enable us to do what we can’t do.”

Each of the speakers seemed to connect with their audience. Assembly attendees noticeably leaned in, rapt as Zacharias spoke of the consistency of character seen in Joseph’s dependence upon God while in Egypt. Smith’s books reportedly sold out at the Assembly bookstore. But Southern Baptist Ethics & Religious Liberty Commission President Russell Moore appeared to have the most fervent response.

As secularization comes through North America, Christians are reacting in one of two negative ways, Moore observed. Either they are not taking secularization seriously enough, or responding to secularization with a sense of “frenzied inevitability” that the “arc of history” is heading towards the elimination of religion and certainly Christianity. This latter response is characterized by perpetual outrage about what is transpiring.

Jesus, Moore offered, shows a way forward in Luke chapter 4amidst a time when cultural Christianity is falling away. It is no longer the case that one must be at least a nominal Christian in order to be considered a good American, Moore reported, recalling a college friend who was honest but not unusual in saying he wanted to be a member of a Southern Baptist church in order to be elected to political office in his state.

A response, Moore proposed, was to re-focus on the Kingdom of God. Jesus, he said, tied the coming of the Kingdom of Heaven to himself, but not as a means to an end.

“Our response should not be a sense of panic, but sense of opportunity,” Moore indicated, as Christians contrast with the ambient culture.

“When Jesus is well-received, he always concludes he is being misunderstood and presses the Gospel until there is shock and alarm,” Moore noted. “The Gospel comes as a contradiction to all the ways we prop up our own kingdoms around us. In a time when Christianity is no longer useful, that is when it can be powerful: for what it is, not as something that grows out of a culture, but is in contradiction to culture.”

Moore identified tribalism as a danger, quoting columnist and author David Brooks that “Tribalism is fake community for lonely narcissists.”

“What is the tribe to whom I belong, who are the people that are going to receive me?” Moore explained of tribalism. “It ends nowhere.” Instead, Moore suggested that Christians see and provide alternative structures pointing beyond attempts at tribalism to something that is “deep and meaningfully true.”

While he did not directly reference contemporary figures, Moore noted that Christians “do not need to advance the Gospel with influence” and should instead create and form a culture that has a distinctiveness about its very difference.

“You and I cannot be the people who are scared, frantic and fearful at the culture around us,” the SBC’s top policy official advised. “We have been trusted with a message and we do not have a different situation than any Christians who came before us in the things that really matter.”

In a refutation of the idea that there was ever a time when American culture was on the right path, Moore declared: “You don’t remember when the culture fell apart, because it fell apart somewhere between the Tigris and Euphrates rivers in Genesis chapter 3.”

“Do we have confidence in the Gospel to trust that it has the power to transform those who are aggressively speaking against it right now?” Moore asked, listing former opponents of the Gospel who became great champions of it, such as St. Augustine of Hippo, St. Paul of Tarsus, C.S. Lewis and Chuck Colson.

“Neither accommodate what any culture at the moment will allow, nor be constant outrage machines,” Moore advised. “Love people to whom we speak knowing that the Holy Spirit and the blood of Christ are enough for any of them.”

The future of the church, Moore noted, is guaranteed by a promise at Caesarea Philippi: “Upon this rock I will build my church, and the gates of hell will not prevail against it.”