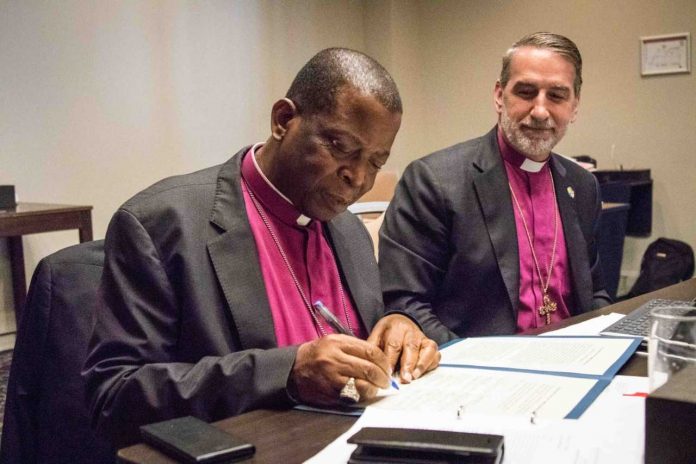 In January of this year, the Church of Nigeria elected four suffragan bishops for the Diocese of the Trinity, a CANA diocese composed primarily of expatriate Nigerians in North America. These elections surprised the Anglican Church in North America and led both provinces to desire clearer lines of authority for the CANA dioceses. A joint committee of representatives from both provinces met in Houston, Texas on March 12, 2019, and the final agreement was signed by both primates this week in Sydney, Australia during the Gafcon Primates Council Meeting.

The agreement provides that CANA become solely a mission of the Church of Nigeria but allows each of the three dioceses (Cana East, Cana West, Trinity) to make its own decision regarding its provincial relationships.

Each diocese will amend its constitution and canons as necessary, and may request to be a ministry partner of the alternative province. Both provinces are thankful that this resolution has been reached and look forward to continued collaboration in Gospel ministry, sharing full communion as provinces in the Anglican Communion.

Archbishop Beach commented on the situation, “In one of my recent trips in the United States I came across an old French Catholic Church and an old German Catholic church within a couple blocks of each other. It reminded me how many Americans over the centuries have maintained cultural and ecclesial connections with their country of origin while starting new lives here in North America. This agreement helps us honor the desire of our Nigerian brothers and sisters in North America to remain connected with the Church of Nigeria, while providing for future ministry partnership.”