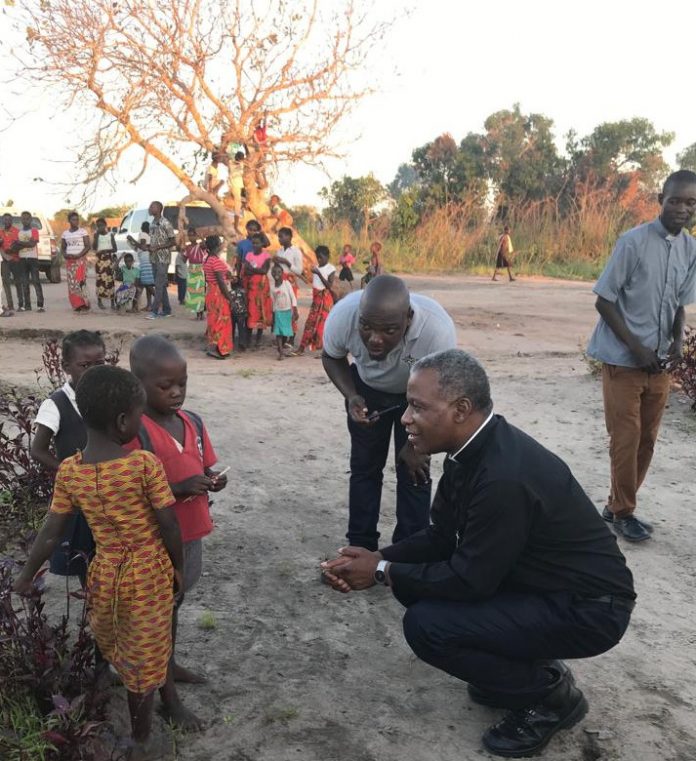 With Bishop Carlos Matsinhe, Archbishop Thabo Makgoba is visiting areas of the Diocese of Lebombo hit by Cyclone Idai. Transport is being provided by a helicopter of the South African National Defence Force, which is helping Mozambican authorities with relief efforts. Also in the party were the SANDF Chaplain General, the Revd Brigadier General Monwabisi Jamangile, and Matlotly Mototjane of the PEO’s office, formerly a senior disaster management official in Lesotho. The Archbishop continues his blog:

Tuesday April 2:  We started the day with breakfast together and said a shortened Morning Prayer, reading from Jeremiah 17:19-27. The dining hall was full of all sorts of NGOs’ reps and rescue people.

We drove to the airport, where we were received by a Mozambican official responsible for justice, the constitution and religious matters, who appreciated the role of the church in the crisis after Cyclone Idai. The airport is a veritable marketplace for journalists, NGOs and choppers.

Col IH Zurich of the South African Air Force and the SA Defence Attaché, Col P Nkambule, welcomed us and Col Zurich briefed us on the day ahead. We flew to Gwaragwara and Busi, seeing from the SANDF helicopter the after-effects of the cyclone – water as far as the eye can see.

Water is sacred, as I always say, and in this context it is too – but too much of it is destroying the fields and displacing people, as we saw in transit camps. Medical teams are confirming that the waterborne disease, cholera, is now emerging in an area which also has lots of malaria.

Returning to our base at Beira, we held a service for the South African team helping the Mozambicans and connected with the South African charity, Gift of the Givers, who are also helping here. Then we were taken through a camp helping displaced people and saw its medical facilities – one of the helicopter pilots was feeling ill and was admitted there.

We returned to St George’s in Beira, this time in daylight, and were able to see how their new church building had been destroyed. We visited Archdeacon Narciso Langa of Pungue and his family, who operate a school at the rectory there.

After lunch we drove more than 50km west to Dondo, on a road which was intact but where electricity lines were down, roofs were blown off and trees blown over. In this region, 11 churches are damaged to varying extents, and a health centre and 13 diocesan schools have been affected.

In Dondo, we hit the hidden and the forgotten, a deeply rural area where houses are flattened and roads full of holes (and our backs are sore). As we arrived at St. Mary’s, Mutua, the singing of the welcoming congregation soothed us. Two classes with scheduled school times have 400 children, and only classes are affected.

In the rebuilding and rehabilitation phase that must now follow, the archdeacon’s work becomes critically urgent. He used to travel on public transport but Bishop Carlos agrees that he now needs a vehicle and estimates that this will cost the Diocese about 8,000 U.S. dollars. They will also need seed to plant, and bricks, mortar and zinc to rebuild damaged churches, schools and a health centre which serve whole communities.

On the way back to Beira, we stopped at a village after a long journey, after which the back of the van accompanying us is filled with more than 20 children. We are guided on an alternative route to that usually taken by the priest, which is now flooded. We leave the tarred road and hit gravel.

In midst of all this, the water lilies are blooming purple and white, saying all will be well. People are attempting to return to normality and schoolchildren are back to school and playing. Hope AFRICA and Green Anglicans continue to share useful information on the situation, as is Matlotly who is with us.

We headed back to Beira having given people some hope, but not food and shelter. Bishop Carlos says we can go on and on as we are, but experiencing the same pain and suffering. Matlotly says there is no proper sanitation and is worried about the resulting illnesses, especially among the many children. The Chaplain General remarks on how people have nothing and depend on Providence.

After the long trip back from St Mary’s, we return to our accommodation. The refrain from the Chaplain General and all of us is that we must feed the people of Mutua sooner rather than later. We arranged resources and agreed on what I should purchase – hampers for 31 families will cost R22,000. We agree that is the way to go and will arrange this before I leave Beira. We will also arrange with Team South Africa to turn their eyes to this area.