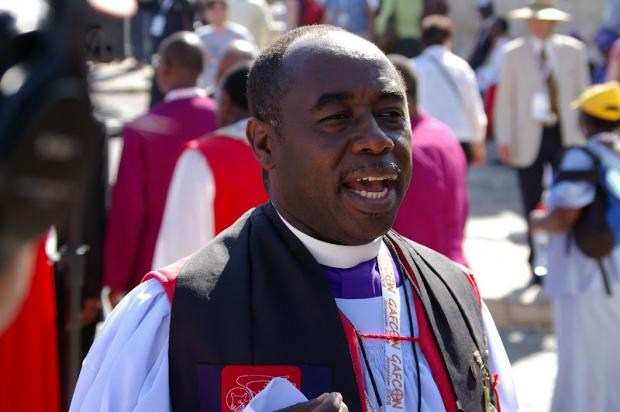 The Archbishop of Jos in Nigeria, Ben Kwashi, has begun his new role as General Secretary of the worldwide network of Anglican churches, GAFCON, taking over from Dr Peter Jensen.

In the past decade, the Global Anglican Future Conference has developed as the leading movement of theologically orthodox Anglican churches and now includes the leadership of provinces representing the majority of Anglican Christians worldwide.

“Peter Jensen, a faithful servant of God led GAFCON as its General Secretary for 10 years,” Archbishop Kwashi said in a videotaped message. “He successfully led three conferences of GAFCON. He held the GAFCON families and provinces together.

“What a joy for me to step into the shoes of such a man, but with fear and trepidation, because these boots are too big for me. But I believe that with your prayers, and with your support, I may not be able to do like Peter Jensen has done but certainly I will not ruin what the servant of God has invested in this ministry.”

The changeover also sees the leader of the Anglican Church in North America, Archbishop Foley Beach, succeeding the previous chairman, Nigeria’s Primate Archbishop Nicholas Okoh. In his February letter to GAFCON members, Archbishop Okoh reinforced the advice of the Jerusalem conference last year against attending the conference of bishops next year in England.

“It came to light last month that the Archbishop of Canterbury’s newly appointed envoy to the Vatican had a history of disputing core Christian doctrine, including a widely circulated video in which he calls for people to be ‘set free’ from belief in a physical resurrection,” Archbishop Okoh said.

“We have also learned with deep concern that the Assistant Bishop of Toronto, Kevin Robertson, entered into a same-sex union using the marriage service in St James’ Cathedral, Toronto.

“This step by the Anglican Church of Canada underlines the urgency of our advice in the Jerusalem 2018 ‘Letter to the Churches’ warning against attending the 2020 Lambeth Conference as currently constituted. For the first time assistant bishops and their spouses will be invited, so we can expect that Bishop Robertson and his partner will be attending and received in good standing.

“With great sadness we therefore have to conclude that the Lambeth Conference of 2020 will itself be an obstacle to the gospel by embracing teaching and a pattern of life which are profoundly at odds with the biblical witness and the apostolic Christianity through the ages.”

Archbishop Kwashi lives one of the most dangerous areas in the world to be a Christian, Plateau State in the Middle Belt of Nigeria. But in his first message, the normally ebullient Archbishop Kwashi echoed the warning of internal dangers for the Anglican communion.

“Before our own eyes, we’re seeing some from within the church and outside the church teaching disobedience to the word of God, violating the very essence for which Jesus came into the world, died and was raised again.

“People are denying such truths, not only from outside the church but from within. We in GAFCON are determined to uphold the authority of Scripture, the teachings of Scripture, and especially to proclaim the salvation of Jesus Christ to the whole world.”