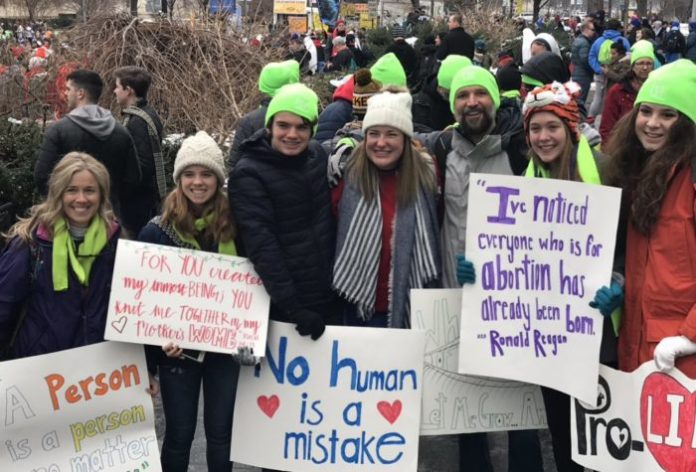 Anglican Christians are ministering in communities where people struggle with anguish and harm caused by abortion but aren’t sure that they can discuss it, according to speakers at an Anglican Church in North America gathering timed alongside the national March for Life.

“We are in desperate need of heroes,” Canon Alan Hawkins preached at a worship service before the annual march. “Our culture longs for heroes: a person who discovers their true identity and does amazing things. A person who speaks truth into them and tells them who they really are.”

The 2019 Summit for Life was held January 17-18 at The Falls Church Anglican in Falls Church, Virginia. Sponsored by Anglicans for Life(AFL) and the Anglican Diocese of the Mid-Atlantic, the event also featured a first-time “ySummit” which drew 85 registered young people on the night of the 17th.

“Deep inside of you, you are created imago dei, the image of God,” Hawkins stated. “You do not have to do great things to have value. We have value as God’s image bearers; we are speaking truth today to a culture.”

“We’re valuable based on our intrinsic worth, not our instrumental worth – what we can do for other people,” proposed Anderson. “We all have an equal claim to dignity.”

AFL President Deacon Georgette Forney explained the purpose of the annual summit is to influence culture, communities, and churches by bearing witness to the cause of life.

“We are here to help the next generation make better choices about life,” Forney noted in her opening remarks to summit participants. “You are here because God wants to move through you with people he will put in your path in 2019.”

“God made the human race of one blood,” shared Dr. Alveda King of Priests for Life. “We fight over race and politics, but we are one blood … we can learn to live together as brothers and sisters.”

Several speakers shared about their own experiences with abortion and how God used people in churches to bring healing to their lives.

“When the pastor speaks from the pulpit about [abortion] it frees people in the congregation to begin telling their stories,” shared Sheila Harper, Founder and President of SaveOne, a ministry to post-abortive people facing mental and emotional anguish.

“It is just as much about men as it is about women, and about the families that suffer around the issue of abortion,” Harper shared of her own abortion and those she has ministered among.

But, Harper explained, abortion recovery is often placed at the bottom of a church budget.

“This is the greatest resource that we have – people who have made this choice turning their life around,” Harper shared.

In a summit workshop, Harper referenced Proverbs chapter 18 verse 21: “Death and life are in the power of the tongue, and those who love it will eat its fruit.”

“We’re speaking life or death; we can choose to use our tongue for evil or good. It’s our choice,” Harper said. Harper also quoted Revelation chapter 12 verse 11: “And they overcame him by the blood of the Lamb and by the word of their testimony, and they did not love their lives to the death.”

“We overcome the enemy by the word of the Lamb and by our testimony,” Harper shared. “I have power – given to me by God – to speak out what he’s done for me. But we cannot speak out our testimony until we are healed, and that is where abortion recovery comes in.”

Harper noted that it is “very common” for her to encounter women who have undergone multiple abortions.

“But when people are healed, it doesn’t happen again,” Harper encouraged. “How many people in our churches are walking around wounded? How many people are out there that we could bring around us because their voices are being added to what we are doing?”

Sustaining a Culture of Life

In his address, Anderson presented an overview of the state of sanctity of life laws and public opinion in the United States, expressing hope but also concern.

“I don’t know how long you can sustain a culture of life when you don’t have a theological grounding,” Anderson wondered aloud, commenting on the decline of religious participation in the U.S.

Anderson, who researches and writes about marriage, bioethics, religious liberty and political philosophy at Heritage, noted that the abortion rate continues a steady drop, down 2 percent during the most recent reporting year.

“We’ve cut in half roughly the number of abortions that took place at the peak,” Anderson reported. He credited changing hearts and minds and legal work as contributors to the declining abortion rate. “Pro-life laws save babies, it’s important to remember that.”

Despite this change in public opinion, the U.S. remains one of only seven nations that permits late term abortions, alongside North Korea and China.

Similarly, only 7 percent of millennials support abortion without any exceptions and funded by tax dollars – the position of the current Democratic Party platform – according to a survey administered by The Polling Company, inc./WomanTrend on behalf of the Institute for Pro-Life Advancement.

“I sometimes fear that these public opinion polls inflate our support based on how they are asked,” the Heritage Foundation researcher qualified, noting that survey results can swing wildly.

Anderson lamented the failure of a GOP controlled Congress unable to defund Planned Parenthood, despite having a President in office who said he would sign such defunding into law. According to NBC News, at least 34 percent of funding for the nation’s largest abortion-providing organization comes from taxpayer dollars dispersed by the federal government, in addition to state funding.

Anderson was encouraged by recent appointments and confirmations of both U.S. district and circuit court judges, a development that he believes will result in incremental changes towards pro-life policies.

“As pro-lifers, we should care not just about killing life, but about how life is passed on,” Anderson stated. “There is a great danger to creating children in the laboratory, treating human subjects as though they are objects of human mastery – where we are the manufacturer and they are the manufactured.”

Anderson reported that, troublingly, the number of children in foster care or waiting to be adopted increased between 2008-2012. During the past five years, the number has increased by more than 50,000. Anderson partly credits this rise to the opioid epidemic, where families are less able to care for children.

“Ideally this number would be zero,” Anderson suggested. He noted that many faith-based adoption agencies have been “shut down by the government” for their insistence upon matching children with families that share their core beliefs.

“How do we help children find forever families when the government is shutting down the faith-based agencies that do some of the best work?” Anderson asked, noting that this comes as the U.S. experiences a 30-year low in fertility. Gradual increases in life expectancy, which had been steadily increasing, have reversed into decline for the past three years, mostly credited to “deaths of despair” such as opioid overdoses and suicides.

Anderson lamented that states “one by one each year legalize assisted suicide for the past four or five years.”

“People increasingly feel pressured to take their own lives,” Anderson observed, noting that it is cheaper to provide a fatal dose of barbiturates than it is to complete a round of chemotherapy. “There is an idea that we are no longer supposed to burden one another. That some lives are not worthy of legal protection.”

“Legalizing assisted suicide undermines…sound medicine, when doctors have the option of killing their patients. The more cost effective solution will be suicide, and people will feel pressured.”

“Human beings, embryos, in labs are treated as objects to be used, as products for us to use rather than gifts to be received.”

“123,000 children are waiting to be adopted in our foster care system…We should adopt these children. Yet the government is attacking Christian adoption agencies that do the best work.”

“Our general attitude now is that people who are too young, too old, to sick are less valuable than others.”

“When you hold your own child in your hands, the abortion nightmare becomes that much more horrific”

Bergh noted that suicide is the 10th leading cause of death in the U.S. and 9th in his native Canada. Bergh listed causes of suicide: a lack of purpose, suffering, and belief that the person is inflicting undue burden upon others.

“Church, do you think we can answer those questions from God’s word?” Bergh asked. “What do we do with elderly when bodies begin to fail and minds begin to wander?”