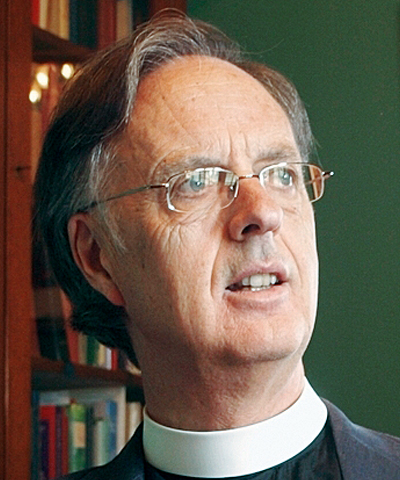 Here is his response, from the official Anglican Communion site in full.
“Christ is Risen!” Dr There has been speculation in the press and on social media about my views on the resurrection of Jesus from the dead. Part of this is based on a sermon I preached in 2008.
“It is my faith that Jesus rose from the dead and I have never denied the reality of the empty tomb. The risen Christ was not a ghost – he ate and could be touched – but at the same time he appeared in a locked room (John 20: 26) and vanished from sight (Luke 24: 31) and he was often not immediately recognised.

“As the Catechism of the Catholic Church states (para 646) ‘In his risen body he passes from the state of death to another life beyond time and space.’ In my Easter sermon in 2010 I said ‘We believe in the resurrection of Jesus after three days, and in this faith we come to know God who raises us from despair to life, day after day.’
“This remains my faith – that Christ is risen indeed.”

Shepherd also received strong support from WA Anglicans. The West Australian reported  “The Anglican Archbishop of Perth, Kay Goldsworthy, described Dr Shepherd as an outstanding member of the WA church community and said she was surprised people had been making “statements of concern” about a sermon from 11 years ago.”A

Eternity published key exerpts from that 2008 message. ““The resurrection of Jesus ought not to be seen in physical terms, but as a new spiritual reality,” Shepherd says on a video released by the Perth cathedral. “It is important for Christians to be set free from the idea that the resurrection was an extraordinary physical event which restored to life Jesus’ original earthly body.”

Shepherd added. “Jesus’ early followers felt his presence after his death as strongly as if it were a physical presence and incorporated this sense of a resurrection experience into their gospel accounts.
“But they’re not historical records as we understand them. They are symbolic images of the breaking through of the resurrection spirit into human lives.”

The key question is what do we mean when we say “Christ is Risen?” What sort of body is a resurrection body.  “If the Spirit of the God who raised Jesus from the dead dwells in you, he who raised the Messiah Jesus from the dead will give life to your mortal bodies also through his Spirit who lives in you” (Romans 8:11).  As theologian N. T. Wright puts it“For early Christians, resurrection was seen to consist of passing death and out the other side into a new sort of bodily life.” The difference is that instead of a corruptible body, we will have an incorruptible one, like Jesus.

More of what Shepherd  says

Historical Christianity believes in the resurrection of a physical-but-transformed body. However some liberal traditions have spoken of the resurrection as the experience of liberation or community experienced by the early Christians. Is this what Dr John Shepherd is saying?

To get a rounded view Eternity has researched a number of additional Shepherd comments on the resurrection.
He first came to notice with a West Australian article in 2003. This only exists in microfilm or bound copies – it is not on the net for copyright reasons, not even on an archive site. Here is the part that raised eyebrows.

“On the eve of Easter, Perth’s Anglican Dean John Shepherd has challenged core Christian beliefs including the meaning of Jesus’ death on the Cross, the Resurrection and the virgin birth. Dr Shepherd said that such teachings were largely symbolic and need not be taken literally. ‘It is utterly pointless to try to reconstruct what happened on that first Easter morning.’ …

‘Christianity did not start with tablets  or a miraculous book, or a ministry of sacraments,’ Dr Shepherd said. ‘There is no hard core of essential beliefs and practices that goes back to the beginning , and is always and everywhere to be believed.’

“He said many traditional teachings had been added to Christianity to reinforce the message that Jesus was divine and to boost the Church’s authority. It was not necessary to believe the Gospel descriptions of Jesus appearing to his disciples after his resurrection, as they were only symbolic stories.

“‘Nor is it necessary to Christian faith to believe that Jesus physically and literally ascended to heaven after 40 days ,’ he said.”
“Tilt at Christian Beliefs” The West Australian, Saturday April 19, 2003. Page 3.

This places Shepherd within the liberal tradition of a symbolic resurrection.

“We experience the risen Christ in community, in the relationships we have with others. We learn to see the life of Christ in others. And this is exactly what Matthew thought. Matthew’s view was that the risen Christ was to be found in the experience of a community. He is the one who said ‘Where two or three are gathered together, there am I in the midst of them’”.

Christians believe that Christ is with us through the power of the Holy Spirit. But here Shepherd seems to be saying that Christians today experience Jesus in the same way as his description the early church at the resurrection.

Shepherd also preached an Easter sermon this year at a church in WA. He recounts the story of Mary mistaking Jesus for the gardener at the resurrection. “Mary is changed forever when he calls her name…
“Over these last days we’ve come to this place to honour the memory of Jesus, to do what we can do for one who is dead.

“But that’s not how we’ll leave this place this morning. The Risen Christ calls us by name as well. We are changed because he is alive. Like Mary, we are transformed, brought into the light, and sent out to be witnesses of his resurrection.”

Shepherd is a skilled writer and his more recent statements deal with the resurrection with Anglican Prayer book-style ambiguity. In his response to the recent controversy and the more recent sermons Eternity has tracked down there is no endorsement of a physical resurrection. It’s missing. But in what they do say, they can be read both to support traditional Christianity or the more forthright liberal view he expressed in 2003 and 2008.

With thanks to Rick Pekan in Perth.