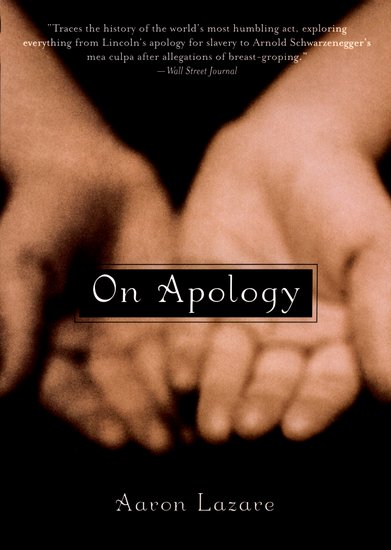 There’s the English apology and there’s the Hebrew apology. The person delivering an English apology has to be awfully sorry, terribly sorry or frightfully sorry. Consider this letter, written by a civil servant ordering an alien to leave the country, from the Hungarian humourist George Mikes How to be an Alien.

Now fast forward from 1946, when Mikes wrote his classic, to 2004 and dive into social anthropologist Kate Fox’s Watching the English: The Hidden Rules of English Behaviour. It is a book I recommended to international students when I was a university chaplain.

“We use the word ‘sorry’ as a prefix to almost any request or question: ‘Sorry, but do you know if this train stops at Banbury?’ ‘Sorry, but is this seat free?’ ‘Sorry – do you have the time?’ ‘Sorry, but you seem to be sitting on my coat.’ We say ‘sorry’ if our arm accidentally brushes against someone else’s when passing through a crowded doorway; even a ‘near miss’, where no actual physical contact takes place, can often prompt an automatic ‘sorry’ from both parties.”

“We often say ‘sorry’ when we mean ‘excuse me’ (or ‘get out of my way’), such as when asking someone to move so we can get past them. An interrogative ‘sorry?’ means ‘I didn’t quite hear what you said – could you repeat it?’ (or ‘what?’). Clearly, all these sorries are not heartfelt, sincere apologies. Like ‘nice’, ‘sorry’ is a useful, versatile, all-purpose word, suitable for all occasions and circumstances. When in doubt, say ‘sorry’. Englishness means always having to say you’re sorry.”

Kate Fox discovered variations in an apology experiment she conducted. “British Asians seemed to have a somewhat stronger sorry-reflex than British Afro-Caribbeans (possibly a reflection of the negative-politeness tendency in Indian culture)” and only the Japanese seemed to have anything even approaching the English sorry-reflex. However, the automatic ‘sorry’ did seem to be a peculiarly English response, she concludes.

For a classic articulation of the Hebrew apology, turn to the Hebrew Bible (or pinch a Gideon’s from the neighborhood Premier Inn if you don’t have one). Here’s the bloke David, who had a left-handed honeymoon with a stunner called Bathsheba and bought her husband a one-way ticket for the Gravesend bus. He apologises when the prophet Nathan pops in for a Safeguarding #YouToo meeting after the incident. “I have sinned against the Lord,” cries David.

Tradition records King David sealing his sorrow in a song of contrition in Psalm 51: “For I know my transgressions, and my sin is ever before me. Against you (God), you only, have I sinned and done what is evil in your sight.”

Julian Henderson, the Bishop of Blackburn, our tragic hero who opens Pandora’s Transgender box and then tries to snap it shut, has finally said sorry. Henderson chaired the House of Bishops’ Delegation Committee, overseeing the publication of the baptism-based transgender liturgy. He commended it on the basis that it was “rooted in scripture.”

Four days later, Henderson signed a completely contradictory statement on a Church of England Evangelical Council (CEEC) statement, which described the guidance as “highly divisive and theologically and pastorally questionable.”

Now, at a CEEC meeting on 9-10 January, Henderson has apologised and has been re-elected CEEC president. Here is his apology from the CEEC statement: “Bishop Julian acknowledged that this Guidance and the associated press release with a supportive comment in his name, as Chair of the Delegation Committee, has been understood to be in direct contradiction with his subsequent signing of the response to the Guidance which was issued by CEEC Officers and Working Group and wholeheartedly endorsed by the Council at its meeting.”

Henderson says “he now believed it would have been wiser not to consider it incumbent on him to speak as Chair on behalf of the Delegation Committee, but rather request someone else to express the mind of the Committee. He clarified that the word ‘we’ in the press release refers to the Delegation Committee and that the CEEC response reflects his own position, in that he is unable to commend the Pastoral Guidance in its present form, and supports the calls for it to be clarified and modified or for its status to be changed so that it is seen as a contribution to the Living in Love and Faith (LLF) Project.”

“I continue to be sorry for the confusion that my different roles and statements have created and am very grateful for the trust my re-election as President of CEEC expresses,” he says.

When is an apology a genuine apology? In his ground-breaking book, On Apology (Oxford: Oxford University Press, 2005.) Aaron Lazare, Professor of Psychiatry at the University of Massachusetts Medical School, offers profound insights into the anatomy of an apology.

“There’s a right way and a wrong way to apologise. There are several integral elements of any apology and unless they are accounted for, an apology is likely to fail.” The four components for an effective apology are “acknowledgment of the offence; explanation; expressions of remorse, shame, and humility; and reparation. Of these four parts, the one most commonly defective in apologies is the acknowledgment,” he writes.

“The offender (or the one speaking on behalf of the offender) must clearly and completely acknowledge the offence. People fail the acknowledgment phase of the apology when they make vague and incomplete apologies (“for whatever I did”); use the passive voice (“mistakes were made”); make the apology conditional (“if mistakes have been made”); question whether the victim was damaged or minimise the offence (“to the degree you were hurt”); use the empathic “sorry” instead of acknowledging responsibility; apologise to the wrong party; or apologise for the wrong offence,” observes Lazare.

Henderson apologises for the confusion that his different roles and statements have created. The confusion isn’t his fault. It’s the fault of the little people. We’ve failed to understand that an important man like the Bishop can have two roles at the same time. If you found yourself perplexed by these two roles, please accept his apology; after all it is such a confusing concept, especially for incumbents in parishes, who may also be School Governors, for example.

The good Bishop also apologises for the intellectual limitations of those who had read these two statements and found them at variance. After all, it takes a mind as nimble as the Bishop’s to see that they do not really contradict each other. His two statements had been “understood to be in direct contradiction.”

The passive voice indicates that he is not to blame. Evidently the fault lies not in what was said, but in how it had been understood. What a shame those in the wider church do not possess such flexibility of understanding to see beyond the narrow confines of words and meanings.

He apologises to those who were confused by the word ‘we’ and who imagined that the bishop was thereby including himself in that pronoun. He clarifies that the word ‘we’ does indeed include himself as Chair where it occurs in the CEEC statement but not in the Delegation Committee’s statement. However, the Bishop gives no indication as to what his preferred pronoun is currently.

Henderson concedes that in hindsight it would have been better if someone else had issued the statement reflecting the mind of the Delegation Committee, for then the word ‘we’ would have been much more clearly understood not to have included the Chair of the Committee.

The membership of the Church of England is grateful to Bishop Henderson for explaining what is meant by words like ‘we’ and ‘transitioning’ (“When I use a word, it means just what I choose it to mean—neither more nor less.”). Members of the Church should now apologise to him for reading these words in their plain and grammatical sense, thinking that ‘yes’ means ‘yes’ and ‘no’ means ‘no’.

Clergy and parishioner alike should thank the Bishop for his heartfelt apology on their behalf, for the confusion they caused themselves by failing to appreciate that he has two roles and for their failure to grasp that two contradictory statements are not in direct contradiction when spoken by a master wordsmith like the good Bishop.

Those criticising Henderson for a non-apology should be ashamed. After all, it would be awfully, terribly, and frightfully unfair to expect a Psalm 51-like mea maxima culpa Hebrew apology from an English bishop. Wouldn’t that amount to cultural appropriation?

Perhaps the bishop might have used the form of  apology along the lines of the quintessentially English Book of Common Prayer? “We acknowledge and bewail our manifold sins and wickedness … we do earnestly repent, and are heartily sorry for these our misdoings; the remembrance of them is grievous unto us; the burden of them is intolerable.” Tush, no! To expect the bishop to tender such an apology, taking us back to 1662, would be highly anachronistic.

If I (or we) have misunderstood or misinterpreted Bishop Henderson’s gracious apology (when he actually did not need to apologise), or if I am being unfair to him, or if I’ve got a fact or a typo wrong, or if my headline is misleading, I apologise to the reader. I am awfully, terribly, and frightfully sorry.