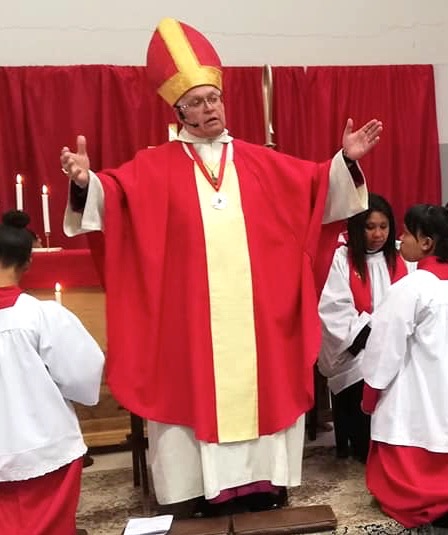 The fifth annual convention of the synod of the Diocese of Saldanha Bay in the Anglican Church of Southern Africa has voted to bless same-sex civil unions. Meeting on 5 Oct 2018 at the Church of the Good Shepherd in Kensington, a suburb of Cape Town, the members of the synod voted 104 to 4 to ask the province to permit clergy to bless same-sex unions as a form of pastoral care, making it the first African Anglican diocese to back gay blessings.

While same-sex marriage was legalised in South Africa in 2006, the Anglican church’s canon on marriage states: “Holy matrimony is the lifelong and exclusive union between one man and one woman.”

The Rt. Rev. Raphael Hess, Bishop of Saldanha Bay, (pictured) has led the push among the church’s House of Bishops to permit same-sex blessings. In 2016 after a service of blessing of the same-sex marriage of Archbishop Desmond Tutu’s daughter by Diocese of Oxford priest was held in the diocese, Bishop Hess said he hoped the Anglican Church would move forward with the times and permit gay blessings.

“The time has come for us to exercise pastoral care, for us to demonstrate a shift that is reflected in the law,” Bishop Hess told The Telegraph in 2016.

The synod also issued an apology to the gay and lesbian community for the “hurtful and unnecessary discrimination to which members of this community have been subjected over the years.”

The motion on guidelines for “pastoral care for members of the LGBTIQA+ community” acknowledged that any attempt to change church canons was “subject to approval by Provincial Synod,” which meets in September 2019 and is expected to address the question of gay blessings. While some liberal dioceses within the province support the innovation, the majority of rural dioceses as well as the dioceses in Angola, Mozambique, Namibia and Swaziland are unlikely to approve any change.

A request for comment on the synod vote by GAFCON-South Africa was not received as of our going to press.