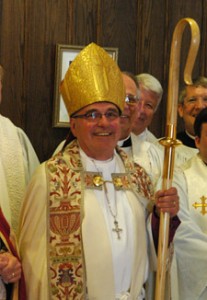 Fears for its future and disquiet over the Anglican Church in North America’s stance on the ordination of women has prompted the Missionary Diocese of All Saints (MDAS) to explore relations with non-Anglican bodies.

The bishops of the MDAS  have not withdrawn the small traditionalist Anglo-Catholic diocese from the ACNA, however in his presidential address to the 15-17 March  2018 meeting of his diocesan synod in Ocean City, Md., the Rt. Rev. William J. Ilgenfritz stated the diocese was speaking to “non-Papal Catholics” with a view to joining a new denomination.

While no decisions on withdrawal is imminent, diocesan sources tell Anglican Ink, but Bishop Ilgenfritz’s speech highlights the disquiet traditional Anglo-Catholics feel over the church’s policy of “two integrities” on women’s orders. The address also comes as Bishop Ilgenfritz and his suffragan, the Rt. Rev. Richard Lipka, prepare for retirement, raising questions as to the viability of the 34-congregation diocese’s survival.

In his address Bishop Ilgenfritz affirmed the Declaration of Common Faith of Forward in Faith North America, which affirms the belief that the “Christian ministerial priesthood is male.”  The Declaration called for a voluntary moratorium on the ordination of women until such time as a consensus is reached among the bishops and leaders of the ACNA in support of women’s orders.

However, “each time” opponents of women clergy called for the voluntary moratorium, they were “rebuffed by those who support the notion of ‘dual-integrity’.”

Bishop Ilgenfritz complained traditionalists were victimized by the majority within the ACNA House of Bishops. “One supporter of Women’s Ordination told those of us who maintain the historic position, if we didn’t support the status quo of “duel-integrity” we should ‘Shuffle off to Rome.’ Message received,” he said.

‘All indications are that ‘dual-integrity’ is here to stay,’ he said adding “This issue of women’s ordination is part of a larger epidemic of anti-Catholic sentiment within the ACNA.”

The feeling of being outsiders also extends to theological views, he noted, citing the presence of professed Calvinists within the ranks of the ACNA. These concerns have led to dissention with the MDAS. “We have lost a few clergy, one parish, and I have received multiple emails and phone calls from clergy; some asking me to stay the course in the ACNA and some urging me to seek out an alternative to the ACNA.”

Defections to other denominations also raises the issue of “sustainability.” The MDAS cannot meet its “sustainability requirements. If Bp. Rich and I were no longer able to serve as your bishops, our congregations desiring to continue in the ACNA would simply be assimilated by other dioceses.”

In seeking the way forward for the MDAS, Bishop Ilgenfritz and his suffragan traveled to Ireland to attend the 6-8 March 2018 meeting in Dublin of the 2018 Convocation for the Restoration and Renewal of the Undivided. Organized by the Churches of the Union of Scranton, the Polish National Catholic Church, the Nordic Catholic Church and the Swedish Mission Church, the Dublin meeting gathered non-Papal catholics seeking closer ecclesial fellowship.

The bishop stated they discussed “how we might move forward in the spirit of a renewed Catholicity and Ecumenical Catholicism,” adding “ Bishop Rich and I also continue our conversations with those inside and outside of the ACNA, that we may know how to best pray and move forward.”

A spokesman for the ACNA told Anglican Ink they were aware of the synod address, but could not comment on it at this time.

Sources familiar with the deliberations in Ocean City note that Bishops Ray Sutton and David Hicks of the Reformed Episcopal Church were guests at the synod — indicating that upon the bishops’ retirement most of the congregations will join existing REC dioceses.