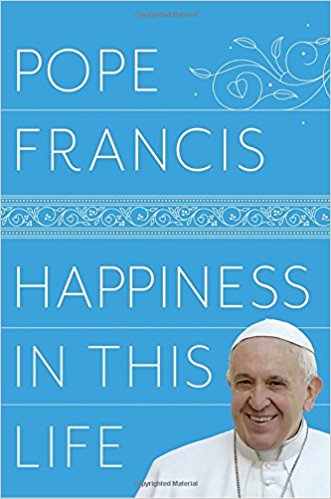 Pope Francis and Jordan Peterson, the recently You Tube famous Professor of Psychology from the University of Toronto, would appear to disagree about how one experiences happiness.

Professor Peterson is famous for telling the snowflake generation that happiness is not a goal you can achieve by seeking it. Human history is full of philosophical musing about how to be happy. They range from the lust for power in Friedrich Nietzsche, “Happiness is the feeling that power increases – that resistance is being overcome”, to Soren Kierkegaard’s more existential,”Life is not a problem to be solved but a reality to be experienced.”

Pope Francis’ book is entitled “Happiness in This Life,’ the implication being, that reading this book will help you discover how to be happy in this life.

So, who is right? Peterson or the Pope? The answer lies, as it so often does, in the small print.

Pope Francis invites his readers to re-acquaint themselves with the Beatitudes, which he describes as the “path towards happiness.”

The publishers push the boundaries even further by translating this on the front cover as “Happiness in this Life.”

The Pope is not wrong of course, but his ‘towards’ is over-ambitious, and the publisher’s reliance on lack of syntax to mask the truth while selling the book, is a small triumph of mammon over God.

The book contains a series of excerpts from Pope Francis’ addresses, homilies, General Audiences, Angelus reflections, (and just one excerpt from the controversial ‘Amoris Laetitia’).

It is divided into four main sections; ‘Your life in Search of Meaning’, ‘You and Others’ happiness in relationships’, a Hundredfold in Suffering Too’, and ‘Those Who Pray Lead Peaceful Lives.” Section 4 is followed by an appendix of the Pope’s favourite prayers.

It is a reflection on Natale Benazzi, rather than Pope Francis, that the book is a little uneven. Most of the energy is in the first section on the beatitudes.

Benazzi is practised at anthologies. He is a theologian who lives in Milan. He has published anthologies previously on Christian art and Church history. (His racier publications include  ‘The black book of the Inquisition’  and ‘The case of the demoniac monastery’.)

Francis’ theological and literary style is not unlike that of Brother Roger of Taize. His approach is that of the natural theologian whose primary focus is on the existential crisis. Like Brother Roger, he speaks to the human condition.

He identifies human yearning and fracturedness and applies short but well directed salves from the Gospel to them. His understanding of the complexity and elusiveness of happiness is more profound that his publisher’s.

“So often we are unable to grasp God’s design, and we realize that we are incapable of assuring ourselves of happiness and eternal life. It is precisely in the experience of our limitations and our poverty, however, that the Spirit comforts us and allows us to see that the only important thing is to allow ourselves to be led to Jesus in the arms of his Father.”

He is a trenchant critic of the hedonistic, secular culture;

“The culture of provisionality does not increase our liberty, but deprives us of our true destiny, of truer and more authentic goals. It is a life in pieces. It is sad to reach a certain age, look at the path that we have taken and find that it has been made of different pieces, without unity, without finality: entirely provisional . . .”

Perhaps because he is so focused on speaking to ordinary people in their own language, he chooses to ignore the distinction between being blessed and being happy. One might pursue a debate on whether being blessed amounted to the same thing as being happy. Certainly, the translators of the Good News Bible thought it was close enough to use ‘happy’ for ‘blessed’, but there is and there ought to be a distinction kept between them. They have it in common that both happen to one, but happiness leaves one contained in oneself, and blessedness expands to being contained by and in God. One leads further, much further than the other. Nonetheless Francis conflates them, perhaps to speak more directly and accessibly. One of the characteristics of his teaching is that blessedness is predicated on conversion.

“You are blessed only when you are converted. Jesus manifests God’s will to lead mankind to happiness. This message was already present in the words of the prophets: God is close to the poor and the oppressed and frees them from those who mistreat them. But in this sermon Jesus follows a particular path. He begins with the word blessed, that is, happy; he goes on to indicate the condition of being so; and he concludes with a promise. The cause of blessedness, that is, of happiness, lies not in the requisite condition –for example ‘poor in spirit’, ‘mourning’, ‘hungry for righteousness’, ‘persecuted’ –but in the subsequent promise, to be welcomed with faith as a gift of God….This is not an automatic mechanism, but a way of life in following the Lord, through which the reality of hardship and affliction is seen from a new perspective and experienced according to the conversion that comes about. One is not blessed if one is not converted, capable of appreciating and experiencing the gifts of God.”

Francis has often caused alarm with the articulation of his concern for issues of social justice. Yet the beatitudes are exactly the place that political activism rooted in the left of the political spectrum refer, to make common cause. Francis is clear that the diagnosis of Jesus in the Beatitudes is one of the heart and not of economic or political status.

“The Greek adjective ptochós (poor) does not have a purely material meaning. It means ‘a beggar’, and should be seen as linked to the Jewish notion of the anawim, ‘the poor of Yahweh’, which evokes humility, the awareness of one’s own limits, of one’s own existential of poverty. The anawim trust in the Lord, they know how to rely on him.”

His antidote to alienation, before any other social remedies, is the existential crisis of the soul and spirit.

“It has been said that the only true sadness lies in not being a saint (Léon Bloy); we could also say that there is only one true misery: not living as children of God and brothers and sisters of Christ.”

Francis is aware that for the young especially, a concern for the ecological crisis is the mark of humanity and alertness. He touches on this in order to harness the anxiety for the priority of salvation and sanctity,

“Develop a human ecology. Each one of us must learn to discern what can ‘defile’ his or her heart and to form his or her conscience rightly and sensibly, so as to be capable of ‘discerning the will of God, what is good and acceptable and perfect’ (Rom 12: 2). We need to show a healthy concern for creation, for the purity of our air, water and food, but how much more do we need to protect the purity of what is most precious of all: our heart and our relationships. This ‘human ecology’ will help us to breathe the pure air that comes from beauty, from true love, and from holiness.”

His concern for the poor, – the material and political poor, is to see them through the lense of existential poverty. He doesn’t suggest a solidarity with political outcomes, but a solidarity located in the existential companionship implied and activated by the incarnation.

“Faced with old and new forms of poverty –unemployment, migration and addictions of various kinds –we have the duty to be alert and thoughtful, avoiding the temptation to remain indifferent. We have to remember all those who feel unloved, who have no hope for the future and who have given up on life out of discouragement, disappointment or fear. We have to learn to be on the side of the poor, and not just indulge in rhetoric about the poor! Let us go out to meet them, look into their eyes and listen to them.”

The issue of gender and the Church is one of the critical issues in the secular mind-set, almost universally shared.

Francis remains doggedly devoted to the tradition. He turns to the feminine in general and Mary in particular as examples of spiritual virtue.

“God goes on seeking his allies, he goes on seeking men and women who are capable of believing, capable of recording events, feeling part of his people to cooperate with the creativity of the Spirit. God continues to walk our neighbourhoods and streets, going everywhere in search of hearts capable of listening to his invitation and make it flesh here and now. To paraphrase Saint Ambrose in his comment on this passage, we may say: God goes on seeking hearts like Mary’s, willing to believe even in exceptional circumstances.”

And he sees the gift of the feminine not only in the unique gift of Mary as theotokos, but in the essential charism of building the family.

“If in the world of work and in the public sphere a more incisive contribution of women’s genius is important, this contribution remains essential within the family, which for we Christians is not simply a private place, but rather that ‘domestic Church’, whose health and prosperity is a condition for the health and prosperity of the Church and of society itself. Let us think of Our Lady: Our Lady creates something in the Church that priests, bishops and Popes cannot create. She is the authentic feminine genius.”

He stretches beyond the family into the world of theology to affirm that women bring different skill sets and different gifts to the intellectual and theological conversation.

“I would like to invite you to reflect on the role that women can and should play in the field of theology. Indeed, ‘the Church acknowledges the indispensable contribution which women make to society through the sensitivity, intuition and other distinctive skill sets which they, more than men, tend to possess.”

Aware of the challenges that feminism poses orthodox anthropologies, he offers an apology and the promise of doing better.

Though he continues to articulate the treasures of Christian experience and spirituality that Mary inspires.

“At the foot of the cross, at the supreme hour of the new creation, Christ led us to Mary. He brought us to her because he did not want us to journey without a mother, and our people read in this maternal image all the mysteries of the Gospel. The Lord did not want to leave the Church without this icon of womanhood.”

The last section of the book contains some of the Pope’s favourite prayers.

The last prayer of the book, a moving plea for help to avoid condemnatory judgement, is by Sister Faustina Kowalska. She was a Polish visionary nun who wrote a diary of her experience with Jesus, which after her death at 33, led to her writing being banned for over two decades, until she was rehabilitated by Pope John Paul 2.

It’s something of a pity the list of prayers at the end of the book is so short, but this prayer in particular is a reminder that the Church reacts badly to high-octane holiness. The jury is still out for many, as to whether Jorge Mario Bergoglio is a holy, pragmatic, no-nonsense reformer in the mould of St Teresa of Avila, or a Jesuitical, relativistic left-wing progressive determined to damage the best traditions of the Church.

Perhaps as with Sister Faustina, only time will truly tell.