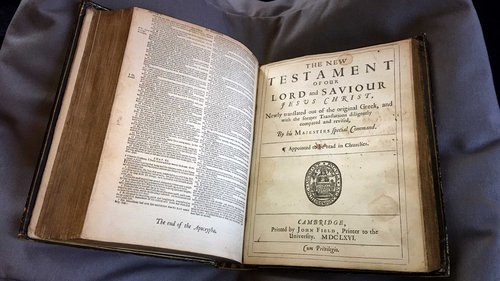 The ordination of nine men into the new ‘Anglican Mission in England’ (AMiE) has highlighted divisions not only over sexuality but also different ideas of what it means to be genuinely ‘Anglican’.

You might think this was straightforward enough: after all, isn’t an Anglican, at least in the UK, a member of the Church of England (or its sister churches in Scotland and Wales) – period? And doesn’t it haveto be like that? But it’s not that simple. Here are some of the ways people sometimes try to define Anglicanism and some of the issues that arise once they start.

Geography: Some people see Anglicanism as being – at least in part – territorial. Thus, as mentioned above, if you live in England, you can only be ‘properly’ Anglican if you are in the Church of England. But this cannot be right, because Anglicanism exists in more than one form in several places already. For example, there is the Free Church of England (FCE), established in 1844 and using Anglican liturgy. The Church of England acknowledges the FCE as a church with valid ministerial orders and its canons permit a range of shared liturgical and ministerial activities.

Again, to choose another example, Canon Peter Adam has written: ‘There are already two distinct and separate Anglican jurisdictions in Europe: each one with its own Bishop. One is the Diocese in Europe, which is part of The Church of England. The other is the Convocation of Episcopal Churches in Europe, part of The Episcopal Church of USA…There is already room for two different expressions of Anglicanism in the same territory.’ So clearly there can be more than one brand of ‘Anglicanism’ in a geographical area, and that is already established practice.

Canterbury: Some people see Anglicanism as being defined by being ‘in communion’ with the Archbishop of Canterbury. This is the line taken by the liberal Church Times newspaper in an editorial last week, which says AMiE should drop the label ‘Anglican’ because being out of communion with Justin Welby invalidates the term.

But this is simply incorrect. As the influential Anglicans Online website says: ‘It is… entirely possible for a church to be completely Anglican in heritage and origin, but for it not to be in communion with the See of Canterbury.’ It then goes on to list dozens of Anglican denominations which fall into this category, including some significant groupings.

Ecclesiology: We are on surer ground when we come to ecclesiology – the nature and structure of a church. Anglicans are all episcopal (they think bishops are a good idea), connectional (they like to be joined with other churches in a way that ‘congregational’ churches are not) and liturgical (they believe using a set form of written words is a desirable and integral part of corporate worship). It would be hard to be ‘Anglican’ without these three things in some shape or form.

Theology: Underlying all these questions, of course, is the issue of theology – what we believe and why we believe it. The website of the worldwide Anglican Communion asks the question: ‘What’s distinctive about Anglicanism?’ It says: ‘Anglicans… agree that their beliefs and practices, their authority, derive from an integration of Scripture (the Holy Bible), Reason (the intellect and the experience of God) and Tradition (the practices and beliefs of the historical church).’ It continues: ‘Anglicanism generally has declared the Bible to be supremely authoritative for matters of doctrine and has broadly subscribed to the Apostles’ and Nicene Creeds.’

The Anglican Communion website then points to the 1886 ‘Lambeth Quadrilateral’ as a ‘summary of a worldwide common Anglican stance’. This is a statement of four essentials, namely ‘the Holy Scriptures, as containing all things necessary to salvation’, ‘the creeds (specifically, the Apostles’ and Nicene Creeds), as the sufficient statement of Christian faith’, the ‘sacraments of baptism and Holy Communion’ and ‘historic episcopate, locally adapted’.

To summarise this all in a nutshell, there is sometimes confusion because people seek to define Anglicanism organisationally rather than organically. If you try and define Anglicanism as an organisation then you end up emphasising things such as church structures and Archbishops. This tends – if not exclusively – to be the approach of some liberals. But if you define Anglicanism as an organism then you tend to emphasise things such as theology, belief and behaviour. This tends – if not exclusively – to be the approach of evangelicals. Anglo-Catholics might try to unite both the organisational and organic understanding of church in a view of the Roman Catholic Church as the truest manifestation of the Body of Christ on earth. Admittedly this is a very great simplification, but it is not unhelpful.

The net result of these differing understandings is that GAFCON’s conservative Anglicans would argue that liberals have left organic Anglicanism in theological terms by departing from ‘the faith once for all delivered to the saints’ (Jude v3), and thus are not proper Anglicans. By contrast, liberals would argue GAFCON has left organisational Anglicanism, by departing from existing structures and the authority of the Archbishop of Canterbury, and thus are not proper Anglicans either.

Underlying that, it could be argued that for more liberal Anglicans unity consists of ‘being together in the same organisation under the Archbishop of Canterbury’ whereas more conservative Anglicans would argue that unity consists of ‘being together in the truth under the authority of Scripture’. Some liberals might then quote the 1930 Lambeth Conference of worldwide Anglican bishops which specifically defined the Anglican Communion as churches which are ‘in communion with the See of Canterbury’. Conservatives would respond by citing the 1998 Lambeth Conference resolution defining sexual morality in traditional terms, arguing that the latter trumps the former.

From both an historical and biblical point of view, it seems to me that conservative Anglicans have more going for their point of view than do liberals. The Lambeth Quadrilateral speaks of the ‘organic’ nature of the church. Moreover, the Thirty-Nine Articles of Religion in the 1662 Prayer Book describe ‘church’ simply as ‘a congregation of faithful people, in which the pure Word of God is preached, and the Sacraments… duly ministered’. It goes on to emphasise the theological over the structural, declaring that a church cannot decree anything which goes against Scripture (Article 20).

Many other arguments and points of view might be presented. These things are indeed complex. But when it comes to future battles – for example over the ownership of church buildings – our understanding of what it means to be ‘Anglican’ may be crucial.

Perhaps the best place to finish is by praying. And the 1662 Prayer Book offers us these words so helpfully: ‘Almighty and ever-living God… Grant that all they that do confess thy holy Name may agree in the truth of thy holy Word, and live in unity, and godly love… Give grace, O heavenly Father, to all Bishops and Clergy, that they may both by their life and doctrine set forth thy true and lively Word, and rightly and duly administer thy holy Sacraments.’ And all the people said, ‘Amen!’

David Baker is a former daily newspaper journalist now working as an Anglican minister in Sussex, England. Find him on Twitter @Baker_David_A The Rough Guide to Discipleship is a fortnightly series. Originally published by the Christian Today news website and reproduced with the knowledge and permission of the author.

The Church of England’s diversity mission has gone too far