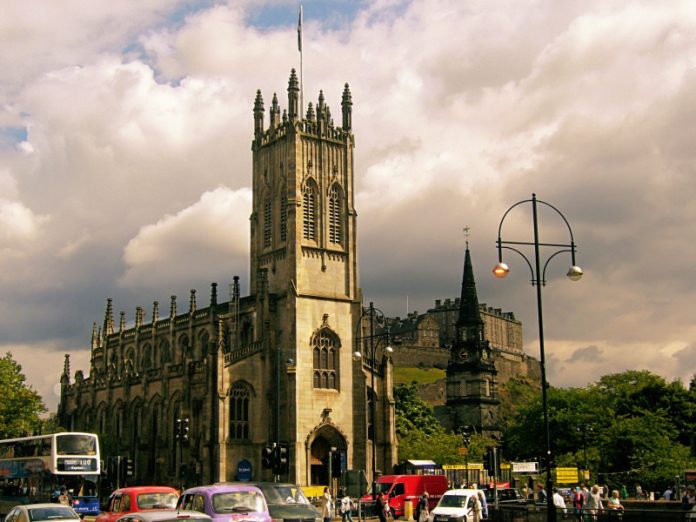 One of the participant’s in Scotland’s first church gay wedding thas been revealed as Anglican Consultative Standing Committee member Alistair Dinnie. On 29 Sept 2017 Christian Today reported Mr. Dennie had wed Mr. Peter Matthews at St John’s Episcopal Church in the first same-sex wedding conducted in a church. Mr. Dennie was the Scottish Episcopal Church’s delegate to the April 2016 meeting of the ACC in Lusaka and was elected by the delegates to its standing committee.

On 1 Aug 2017 the Rev. Markus Dünzkofer, rector of St. John’s, reported that he had officiated at a wedding at a hotel for an American couple, “Mark and Rick”. “This was not some pretty, fancy occasion,” he said. “They wanted a religious ceremony and they wanted it to be a nuptial Mass,” he wrote on Facebook.

On 16 Sept 2017 Fr. Dünzkofer officiated at the wedding of Peter Matthews and Alistair Dinnie at St. John’s, making it the first same-sex Anglican church wedding in Scotland. Since the Matthews/Dinnie wedding same-sex marriages have also been celebrated in Glasgow and Moray.

Fr. Dünzkofer told BBC Scotland “I’m delighted that the two of them tied the knot and had a marriage in a church service. Their love that they have for each other is quite obvious. It has nurtured not just me but many members of the congregation. They are very active and supportive members of the church and they do so much voluntary work, we wouldn’t be where we are without them.”

At its June General Synod meeting, the Scottish Episcopal Church took the final steps towards authorizing same-sex marriage, removing from their liturgy the phrase marriage was a “union of one man and one woman”.

A closed door press briefing at Lambeth Palace hosted by the press offices of the Anglican Consultative Council and the Archbishop of Canterbury suggested the Scottish action would be brought to the attention of the primates at their meeting in Canterbury next month, and that the SEC could be disciplined for its decision.

The new primus of the Scottish Episcopal Church, the Most Rev. Mark Strange, endorsed the change to the marriage canons and has been a vocal supporter of same-sex marriage.

Some traditionally minded primates are sitting out this meeting, in protest to the ineffectual actions of the Archbishop of Canterbury and the ACC. At their last meeting, the Episcopal Church was disciplined for authorizing same-sex marriages, but Archbishop Justin Welby and the Anglican Consultative Council declined to follow through with their recommendations.

A spokesman for GAFCON told Anglican.Ink: “Mr Alistair Dinnie made his position on same-sex marriage well known prior to attending ACC-16 in Lusaka, Zambia, and is one of the revisionists whom The Episcopal Church voted onto the Standing Committee. It is tragic that the President of the Anglican Consultative Council, Archbishop Justin Welby, allowed this nomination and election to move forward, but this is symptomatic of the ecclesial deficit in the Anglican Communion, and a situation that the Primates will need to address.’”