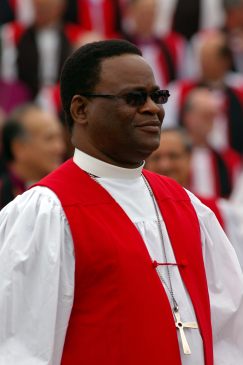 The Archbishop of Tanzania has declared the see of the Diocese of Dar es Salaam vacant after deposing its bishop, the Rt. Rev. Valentino Mokiwa, for theft. However, Bishop Mokiwa is refusing to accept his primate’s decision, saying the Most Rev. Jacob Chimeledya does not have the authority to remove him from office.

In a letter dated 7 January 2017, Archbishop Chimeledya laid out the case against Bishop Mokiwa. He stated Bishop Mokiwa had declined to assist a provincial committee that had been asked to investigate allegations raised by members of the diocese that their bishop had defrauded the church.

However, the investigative committee found evidence the bishop had leased 200 hectares of church land on 24 Oct 2011 to Lamada Hotels and Apartments, which would build a shopping mall and residential dwellings.

The proceeds from the transaction, SH216 million ($100,000) was deposited into a Dar es Salaam Evangelism account at the Dar es Salaam Commercial Bank, with the sole signatories on the account being the bishop, diocesan secretary and evangelism officer.

“Unfortunately, nobody knows how the money from the account was spent,” the letter said.

Tanzanian civil and church law requires the assent of the trustees of a charitable organization before an entity may alienate property. Neither the House of Bishops nor the diocesan standing committee approved the transaction, he noted.

He said by failing to cooperate with the committee, Dr Mokiwa violated Article 17 of the church’s constitution of 1970 as amended in 2004, which requires a bishop to give an oath of canonical obedience to his archbishop. If a bishop is found to have engaged in conduct unbecoming a member of the clergy, the archbishop may direct the offending bishop to step down.

On 7 January 2017 Archbishop Chimeledya met with the diocesan standing committee to deliver his letter. However, the diocese refused to recognize the order, saying it had been issued by the primate, not by the full House of Bishops.

On 9 January 2017 Bishop Mokiwa held a press conference telling reporters the archbishop had usurped authority not granted him by the constitution when he attempted to remove him from office. He said the diocese would not obey the order, and appealed for assistance from his allies in the House of Bishops.

Archbishop Chimeledya responded by telling The Citizen Bishop Mokiwa’s opinions did not change matters. “It doesn’t matter whether he accepts or rejects my advice. What is important is that believers in Dar es Salaam Diocese should know that Dr. Mokiwa is no longer their bishop according to the constitution.”

Sources familiar with the situation tell Anglican Ink the mechanism used to depose Bishop Mokiwa is untried in canon law, and that a state of “chaos” exists. The Tanzanian press has taken up the story, however, prompting one insider to speculate the government will move quickly to resolve the dispute.