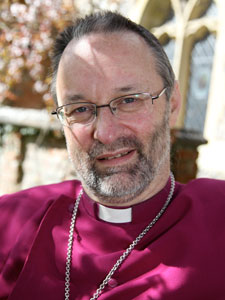 Jesus Christ subverted traditional teaching about marriage and family, building a foundation that would eventually support same-sex marriage, according to a Church of England bishop.

“It’s the queering – the subversion – that actually is the power in the religion, not literalism about what was in the book,” proposed Bishop of Buckingham Alan Wilson at a gathering of academics and social activists. “The Bible turns out to be quite a supple document that reflects the cultures of the society which produced it.”

Wilson offered a keynote address on “Same-sex marriage and the queering project of Jesus” at the seventh Queering ParadigmsConference held in the Cayman Islands June 11-12 at the auditorium of the Cayman Islands Chamber of Commerce. Sponsored and hosted by the “Queering Paradigms Network” of Canterbury Christ Church University, UK., the conference challenged restrictions on homosexual practice in several Caribbean island nations.

The Queering Paradigms network is describes itself as “dedicated to examining the current state and future challenges of queer studies from a broad trans-disciplinary and polythetic perspective, and by interrogating numerous social, political, cultural and academic agendas.”

In his address, Wilson gave an overview of the legalization of same-sex marriage in the United Kingdom, part of what he categorized as “a queering of the institution of marriage”.

“What had been seen as a fortress against gay people has suddenly been evacuated of its power and the result is a different kind of institution,” Wilson assessed.

The British bishop shared that he first became involved in the issue of same-sex marriage when a married man sought to transition to a female identity and remain married to his wife. While the couple did later divorce, Wilson proposed that the couple’s vows to one another remained unchanged despite the man’s change in gender identity.

Reporting that a majority of same-sex marriages in England and Wales are between women rather than men, Wilson lamented that “the church has been left out in the cold” and wondered aloud “which part of the Book of Leviticus they [women in same-sex marriages] are breaking” in reference to the text’s prohibition of a man lying with another man like a man lies with a woman.

Wilson also shared statistics showing shifting societal acceptance in the UK for both homosexuality in general and same-sex marriage.

Examining the church’s response to same-sex marriage, Wilson charged that there are only five biblical “clobber texts” condemning homosexuality available out of about 32,000 in total.

“There is almost nothing in the Bible about this one, that’s the truth,” Wilson assessed. “It’s very interesting what there is, but it requires a lot of interpretation.”

Noting that King Solomon had hundreds of wives and concubines, Wilson was incredulous that scripture only held up marriage between one man and one woman.

“It [homosexual practice] deeply offends people who have a very simple idea of what a natural human being is founded on Victorian taxonomy: an idea of what’s natural from Newton,” Wilson described.

Wilson criticized the idea that the human body had natural uses and that a master designer had a specific intention in mind when designing the human body.

“In fact, we do live in a world where there are lobsters and telephones and if you want to put the two together you are perfectly welcome to do so,” Wilson announced, dismissing as “not good” a “simplistic way of looking at things.”

“The whole way of imaging the human body in terms of what you believe God would have designed the different bits to do breaks down when you consider the reality of human bodies,” Wilson argued, pointing to contortionists as an example. “I would contend that what has changed with same-sex marriage is not the theology of marriage at all, but our conception of the natural order.”

Noting that Jesus raises the widow’s dead son in Luke Chapter 7:11-17, rather than keeping clear of the dead body as Leviticus Chapter 21:11and Numbers Chapter 19:11 instruct, Wilson interpreted that Jesus “raises the dead by nonconformity to the letter of the law – and perhaps that way of looking at these texts restores to us something of what they actually mean.”

Calling for reading the narratives “in a new and different way”, Wilson charged “the whole idea that binarism is part of the Judeo-Christian tradition is rubbish. There are thousands of references in Mishna and Talmud to a great subtlety about the definition of gender. They don’t have this Newtonian, idealized taxonimized picture that we think somehow goes with the Bible. It does not go with the Bible. The idea that two genders and binarism are the only way of realizing the Bible is simply untrue.”

Recalling the biblical characters Tamar, Rahab and Ruth, Wilson noted that they received their righteousness by grace, not of the law.

“The question we’ve asked is ‘is homosexuality right or wrong’? Perhaps the question we should ask is ‘why does a phenomenon that seems natural to most people seem so wrong to others?’ Maybe our view of gender and binarism is going to be the casualty of same-sex marriage in the UK. We’ve got to go to other models that are truer to the experience of being alive,” Wilson concluded.

First printed in Juicy Ecumenism and reprinted with the permission of the author.

The entirety of Bishop Alan Wilson’s address is viewable here: