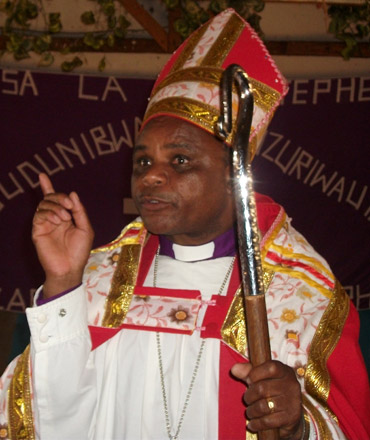 The war of slights and snubs within the top echelons of the Anglican world shows no signs of abating, with the Anglican Church of Kenya snubbing the Archbishop of Canterbury, the Most Rev. Justin Welby. Anglican Ink has learned the ACK has declined to invite Archbishop Welby to give the sermon at the July consecration of archbishop-elect of Kenya, the Most Rev. Jackson ole Sapit. It has extended the invitation instead to the newest member of the GAFCON primates council, the Archbishop of Tanzania, the Most Rev. Jacob Chimeledya (pictured). The Kenyan snub follows the Lambeth snub of the GAFCON primates over the Task Force authorized by the January primates gathering in Canterbury. Leaders of the Churches of Uganda, Nigeria and Kenya tell AI they were not consulted by Lambeth Palace or the Anglican Consultative Council on the composition of the task force, and learned of its membership from press reports. The appointment of a Kenyan to the task force, without speaking with the leaders of the Kenyan church, AI was told, telegraphed to the GAFCON leaders they should not expect anything from this latest Lambeth commission, one leader explained. Queries to the Lambeth Palace press office asking why the GAFCON leaders were not consulted have gone unanswered.