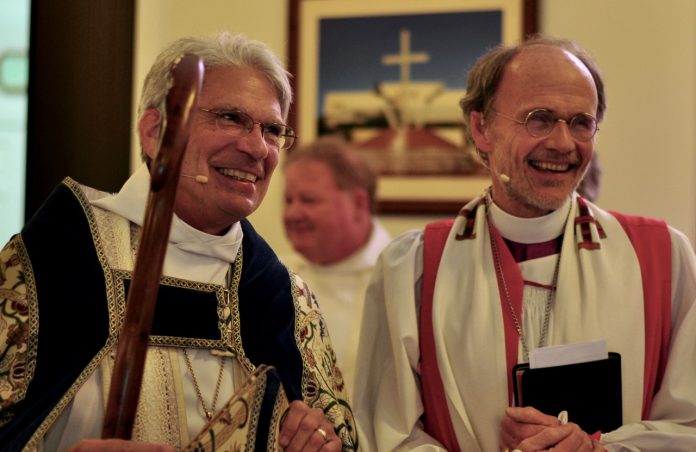 BLUFFTON, S.C. – March 12, 2016 – The Diocese of South Carolina is considering affiliating with the Anglican Church in North America (ACNA).

The Diocese’s Affiliation Task Force recommended the association during the 225th annual Diocesan Convention in Bluffton this weekend. Affiliation would require the Diocese to approve affiliation in two future conventions.  More than 350 clergy and delegates representing 53 churches across the southern and coastal part of the state gathered for the convention.

Before affiliation the Task Force will host meetings throughout the Diocese to brief clergy and church members about the benefits of affiliation and ask questions about the possible move.

The Rev. Canon Jim Lewis said that the Convention is a bit like a family reunion.  “We gather to be equipped and encouraged for ministry and to have our vision for the Diocese renewed by the Bishop,” he said. “It’s also a time to elect individuals to serve in various diocesan offices and take care of other family matters.”

Bishop Mark Lawrence, the Diocese’s 14th bishop, reviewed with those attending the conference a number of ways the Diocese has moved forward in its effort to “Make Biblical Anglicans for a Global Age.” Lawrence first cast this vision during his first address as Diocesan Bishop in 2009, stressing two trajectories: helping every congregation engage every generation with the Good News of Jesus Christ and helping shape emerging Anglicanism in the 21st Century.

In closing, the Bishop referenced the awaited decision from the South Carolina State Supreme Court regarding the Diocese split with the Episcopal Church and the ownership of property. The Bishop quoted from an email he had received from a clergyman the day before the conference that said, “When jets are launched from aircraft carriers they point them into the wind rather than seeking the wind at their back.”  Lawrence ended by saying, “Let’s put her into the wind!”