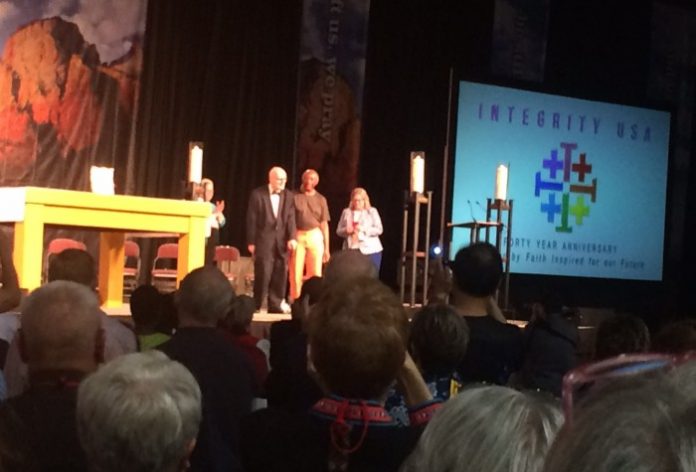 Lesbian, Gay, Bisexual and Transgender (LGBT) Episcopalians marked 40 years of advocacy in the Episcopal Church during a Monday night Eucharist characterized by inclusive language, liturgical innovations and prayers for “disordering our boundaries and releasing our desires.”

Hundreds of Episcopalians at the denomination’s triennial General Convention in Salt Lake City, Utah participated in a festive Eucharist hosted by Integrity USA, the church’s unofficial LGBT caucus. The event took place the same day that bishops gave approval to a new gender-neutral marriage rite which appears likely to be enacted by the end of the week.

“We’ve been at this for 40 years — it’s a nice, Biblical number to be coming out of the wilderness,” declared former Integrity USA President Susan Russell of the Episcopal Diocese of Los Angeles.

The caucus, which was founded in 1974 by six-time General Convention deputy Louie Crew, has had a presence at every such gathering since 1976.

Viewscreens projected rainbow-colored Jerusalem crosses as the congregation sang an opening hymn to the “Wind of God.” An aspergillum-wielding Bishop Suffragan Mary Glasspool of the Episcopal Diocese of Los Angeles sprinkled the congregation with holy water while a dove and colorful streamers circled overhead at the tip of a  liturgical gizmo resembling a long flycasting rod.

“And now a word from the Prophet Louie,” a prayer leader introduced, beginning a video on the life of Crew. Following the video, the congregation was led in singing “Louie, Louie, Louie Hallelujah.”

“All I did was get in the way of the Holy Spirit, and she’s a fierce tornado,” Crew said in accepting the medal. Encouraging the assembled congregation to “be evangelicals for Jesus,” Crew emphasized his calling to open the church to groups which felt marginalized or excluded.

Integrity has been a powerful voice at General Convention, triumphing in 2003 with a successful vote of consent by Bishops to the election of openly partnered gay bishop Gene Robinson to lead the Episcopal Diocese of New Hampshire. The organization has sponsored legislation at past conventions adding gender identity and expression to the church’s nondiscrimination canons.

Despite achieving its goals, Integrity USA announced in March that most staff would be laid off due to “resource issues.” Both Development Director Sam Peterson and Executive Director Vivian Taylor — who had signed on with Integrity only two years prior — saw their positions eliminated.

But financial difficulties were not mentioned at the upbeat celebration.

“What a week, no?” Glasspool asked with a smile, listing off new Supreme Court rulings enacting same-sex marriage and upholding the Affordable Care Act as well as the election of North Carolina Bishop Michael Curry as the denomination’s first African American Presiding Bishop.

“Bishop Curry knows what ‘all’ means,” Glasspool affirmed, noting that Curry had preached at an Integrity event two years prior. The bishop, who was the first openly partnered lesbian to be consecrated to the episcopate, also noted that the service was for the first time being held in the General Convention worship space as an official part of the churchwide gathering.

“We got to this place of redefining marriage by redefining two other words: home and family,” Glasspool declared in her sermon. Recalling her early love of Homer’s Odyssey, the bishop summarized the book as encapsulating both a desire for adventure and later a desire to return home. Tying her sermon to the Gospel text of Luke Chapter 4 when Jesus reads at the synagogue in his home town of Nazareth, Glasspool explained that in the Gospel of Mark, the author implies that Jesus is already moving away from his natural family and into the home of Peter in the town of Capernaum.

“The concept of family is transformed. The reign of God transcends the closest of family trees,” Glasspool interpreted.

Following the sermon message, Priest Kimberly Jackson of the Episcopal Diocese of Atlanta read a prayer to begin the time of communion:

“Spirit of Life, we thank you for disordering our boundaries and releasing our desires as we prepare this feast of delight: draw us out of hidden places and centers of conformity to feel your laughter and live in your pleasure.”

The service detoured significantly from the church’s Book of Common Prayer, instead drawing from several alternative resources. The Eucharistic prayer was taken from Prayers for an Inclusive Church while the prayers of the people were adapted by transgender priest Cameron Partridge from We Pray: Prayers to and for the Transgendered Community. An opening invitation to worship was adapted from a Post-Colonial Eucharistic Prayer and scripture readings were taken from The Inclusive Bible.

This article first appeared in Juicy Ecumenism and is reprinted by permission of the author.