The Supreme Court of New Hampshire has reinstated criminal charges brought against an Episcopal Church for child abuse. 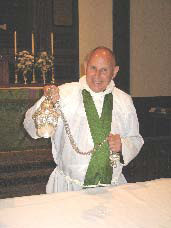 “We express no opinion as to whether the evidence, described by the trial court in its order, would be legally sufficient, if introduced at trial with no other evidence, to survive a motion for directed verdict at the close of the state’s case,” the court held.

First arrested in England by Lincolnshire Police in 1994 for child abuse, Huntress was arrested in July 2011 by police in Massachusetts and extradited to New Hampshire following a grand jury indictment for having twice sexually assaulted a child under the age of 13 in January 1984 and April 1985. The incidents occurred while Huntress served as rector of St Stephen’s Episcopal Church in Schuylerville, NY, and took place during a church event in New Hampshire.

In April 2011 allegations of child abuse were filed with the New York State police, however, the Saratoga Country District Attorney said his office could not pursue criminal charges against the retired priest. At the time the alleged abuse took place, New York law required that criminal proceedings be brought within five years, or five years after the alleged victim turned 18. The statute of limitations on sex crimes differs in New Hampshire and a grand jury returned an indictment on two counts of abuse.

The former clergyman posted a $25,000 bond in New Hampshire and has been released from custody pending trial. Huntress’ attorneys moved the indictments be struck down on the grounds of insufficient evidence. The trial judge agreed and dismissed the charges, however, last week’s ruling by the Supreme Court returns the case on remand for trial.

Claims the then 77-year-old priest molested a child in 1974 prompted an investigation by the Diocese of Massachusetts. During the course of its investigation, the Diocese learned Huntress had been arrested by police for abusing a child in 1994 while service as vicar of St Matthew’s Church in Skegness, Lincolnshire.

No charges were filed in the English case as the victim’s family did not want the child to testify in court. However, Church investigators concluded the allegations were true after reading the police report and speaking to the officers involved, said Canon Mally Lloyd, the Bishop of Massachusetts’s assistant.

Confronted with the charges, Huntress resigned his orders, and was formally removed from the priesthood on 11 February 2011 by the Rt. Rev. M. Thomas Shaw SSJE of Massachusetts.

A spokesman for the Diocese of Lincoln confirmed that Huntress “had been arrested and charged in 1994 on accusations of abusing a minor when he was serving in England. However it appeared that these charges were dropped and the detail and the circumstances were unclear.”

Diocesan spokesman Will Harrison stated that “when the request for further information from the Diocese of Massachusetts was received the former Diocese of Lincoln file had been destroyed as part of a previous archive policy.”

Huntress gave permission for the Lincolnshire Police to release their file on his arrest to the Diocese of Massachusetts, Mr. Harrison said, adding the diocese “was then informed that he was removed from the priesthood in the USA and the Diocese therefore notified the national Church authorities in case he moved back to the UK.”

Calvin Robinson and the state of the Church of...

Letter to Nancy Pelosi from the Archbishop of San...

Parish Poverty: Reduce the number of bishops to lighten...

ACNA’s Response to Anglican Communion Office“We Have Not Agreed...