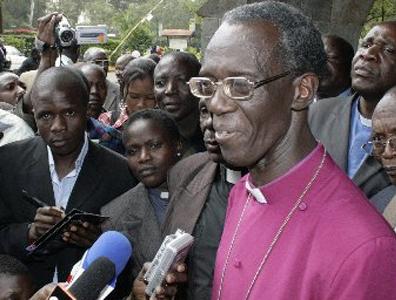 Greetings in the precious name of our Lord and Saviour Jesus Christ!

When we met for GAFCON 2013 here in Nairobi last October, we drew inspiration from the living tradition of the East African Revival, a movement of the Spirit that led the churches of this region back to a new love for the Lord Jesus and a new obedience to the Scriptures as the Word of God. The authenticity of the Revival was demonstrated in times of persecution, including Uganda under the regime of Idi Amin. Earlier this month my brother Primate of Uganda, Archbishop Stanley Ntagali, gathered with thousands of people at Mucwini, Kitgum, for the 34th commemoration of the martyrdom of Archbishop Janani Luwum who was murdered at the hands of Idi Amin on 16th February 1977. During the service more than 250 people responded to Archbishop Stanley’s sermon as he invited people to come forward and surrender their lives to Jesus as Lord and Savior. This was a most fitting and wonderful commemoration!

Not long before his assassination, Archbishop Janani said to the great evangelist Festo Kivengere, “They are going to kill me. I am not afraid”. It is my passion that the GAFCON movement will inspire courageous Christ- centred leadership such as this throughout the Communion in these troubled times.

One of the marks of bold leadership is clarity. The faith we proclaim is the truth as it is revealed in Holy Scripture, not a human invention, and it presents us with a choice between two ways. One leads to life, the other to death.  In the Sermon on the Mount, Jesus calls those who would follow him to enter by the narrow gate, not the wide gate that leads to destruction, (Matthew 7:13,14) and I believe it is significant that his warning about false prophets follows in the next verse. This is what false teaching in the Anglican Communion today is like. It is the wide gate that accommodates secular permissiveness and breaches biblical boundaries in doctrine and morals.

After the praise that greeted the news that Oxford University is to honour the Presiding Bishop of the Episcopal Church of the United States with an honorary Doctorate in Divinity, it was helpful to be reminded of the sober facts in the Statement issued by the Global South Primates Steering Committee last week. It was recognized that ‘the fabric of the Communion was torn at its deepest level as a result of the actions taken by The Episcopal Church (USA) and the Anglican Church in Canada since 2003’ and the Communion’s London based institutions were described as ‘dysfunctional’.

The breadth of the wide gate can be dangerously appealing as an easy choice, avoiding the need for theological discernment and church discipline. This is why I have already written a response (http://gafcon.org/news/a-response-to-the-statement-by-the-archbishops-of-canterbury-and-york) earlier this month to the Statement of the Archbishops of Canterbury and York about pastoral care for people who engage in same sex relationships.

Sadly, the lack of clarity in that statement about the biblical understanding of such relationships has been repeated in the pastoral guidance issued subsequently by the Church of England’s House of Bishops as same sex ‘marriage’ becomes legal in England and Wales next month. While the Church’s official teaching on marriage as exclusively between a man and a woman is affirmed, it is effectively contradicted by the permission given for prayers to be said for those entering same sex ’marriages’.

The lesson I believe we have learned from the failure of institutional attempts to restore unity by accommodation is that we must be more radical. We must return to the ‘narrow gate’ and come together on a strong and clear doctrinal basis. The GAFCON movement has been able to act as an instrument of unity in the Communion because it has the Jerusalem Statement and Declaration which together give us a clear, faithful and contemporary statement of Anglican identity.

I do strongly commend the continued study of both documents because they restore our focus on the gospel. The best way to be alert to the challenges of a counterfeit gospel is to become more and more immersed in the glory, power and wonder of the true gospel. So let me conclude with the words of the Apostle Paul that come just before the verse I quoted at the beginning of my letter: