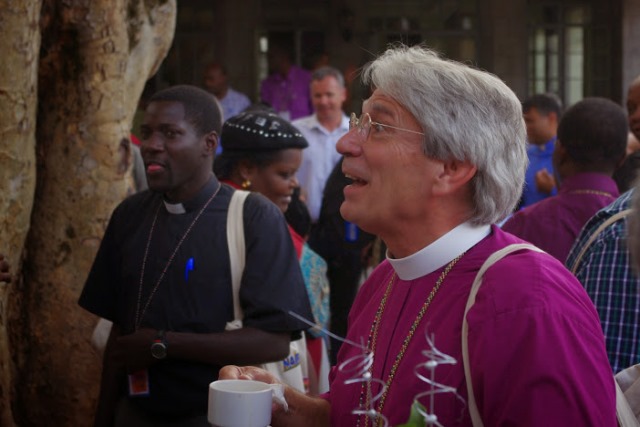 The judge, who had only a few months ago rejected efforts by the national Episcopal Church to drag literally all of the diocese’s officers into the suit, said there was no reason to single out the specific members of the clergy for acting consistent with the wishes of the Diocese as approved by literally thousands of members of the diocese.

In November, TECSC had asked the judge to expand its suit to include Bishop Mark Lawrence and three other clerics, alleging that actions they took to withdraw the diocese from the denomination were outside the scope of their legal authority and violated state law.  In denying the motion, Judge Goodstein briefly referenced a last minute TECSC affidavit that asserted an early conspiracy to leave TEC.   The Very Rev. Paul Fuener, a priest named in the affidavit, observed, “I am confident that his recollection of our interview is seriously in error, if not worse.”

In its official response to the motion, the diocese filed a document that stated, in part: “The allegations on any paper other than one filed in a court would be libelous. … In an era when the public believes the legal profession contributes very little to society’s well-being, the … motion serves only to support that belief.”

“We are grateful that Judge Goodstein dismissed this most recent effort to harass our people with time-consuming, expensive litigation,” said Jim Lewis, Canon to the Ordinary of the Diocese.  “Attorneys for both TEC and TECSC have tried to distract attention from the denomination’s efforts to seize our property by suing our clergy and pursuing our lay leadership.  The judge’s decision ends the legal fishing expedition and forces all to focus on the only issue that matters: whether our religious freedom is protected.”

TEC’s motion alleged that the four individuals were responsible for a laundry list of offenses, including breach of fiduciary duty, fraud, conversion, trademark infringement and civil conspiracy. The four were:

·       Bishop Lawrence, who led the diocese out of TEC after the denomination attempted to remove him as its duly elected Bishop of the diocese.

·       Jeffrey Miller, former president of the Standing Committee of the diocese and rector of The Parish Church of St. Helena, Beaufort, one of the congregations that filed suit to protect parish and diocesan property from TEC’s efforts to seize them.

·       Paul Fuener, former president of the Standing Committee and rector of Prince George-Winyah in Georgetown, another plaintiff in the suit against TEC.

TEC has historically used the courts to punish parishes and dioceses who disagree with the denomination’s shifting theology. The group has already spent more than $22 million on legal efforts to seize individual church property and evict parishioners. At times when judges have ruled against TEC, the denomination has filed time-consuming appeals that have tied up resources of churches and Dioceses which separated from TEC and, occasionally, worn down the resolve of individuals seeking religious freedom.

Meanwhile, Judge Goodstein said the case will go to trial in July.

The Diocese of South Carolina disassociated from the Episcopal Church in October 2012 after TEC tried to defrock Bishop Lawrence. Following the Diocese’s decision, 49 churches representing 80 percent of the Diocese’s 30,000 members voted to remain in union with the Diocese and not with TEC.