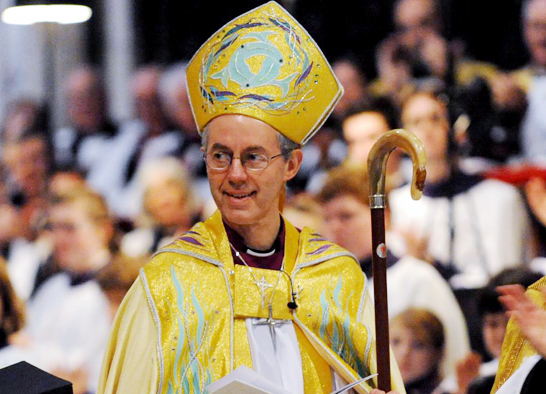 In his Christmas Day sermon for 2013, the Archbishop of Canterbury Justin Welby has called upon Anglicans to stand in solidarity with the oppressed Christians of the Middle East. “We see injustice in the ever more seriously threatened Christian communities of the Middle East. They are attacked and massacred, driven into exile from a region in which their presence has always been essential.”

Isaiah looks forward to God rescuing His people, instantly recognisable, leading them in victory. Hebrews looks back at the great line of prophets and says this arrival is the climax to the whole of history. John starts with those words that send shudders up the spine, consciously echoing Genesis, “in the beginning ……. “

So what do we get? A few kilos of crying baby. Shepherds clump in and mutter approvingly at his size, or health, or shape of his nose, or whatever banal things we try and find to say when we meet a baby (Winston Churchill is reputed to have said when told that a grandchild looked like him “all babies look like me”). When God assumes flesh he does not take power, but vulnerability, need, dependence. God the baby is so small that he leaves room for all of us to ignore Him, to glance and pass on. The heart and origin of creation is easily overlooked. This is less Big Bang than faint cry. RS Thomas wrote[1]:

“The moon is born
And a child is born,
lying among white clothes
as the moon among clouds.
They both shine, but
the light from the one
is abroad in the universe
as among broken glass.”

God was born fully human. The witnesses are shepherds and magi, John the Baptist, the gospel writers and hosts of Christians through the centuries, in their lives and their deaths, in words and deeds. For a witness of this birth is not like a witness of comet or an asteroid, which is seen and noted, but which has little or no effect on the one that sees it. If we respond, this small baby God that gives us so much space to ignore, fills our whole world, changes what we see when we look, catches us up and takes us with him in life, through death and into all eternity. Belief, putting ourselves and trusting our lives into the power of this child, the man he became, the crucified saviour, the risen and ascended Christ, enables us to become children of God, our whole being changed.

God’s way of being human shows us what being human means. According to the gospel of Jesus Christ to be human means being vulnerable, not safe. Our pride is humbled by God needing swaddling. Our wisdom is confounded by the foolishness of God’s baby cries. Love is demonstrated not by grasping power but by lowering yourself so you can raise the fallen.  The humility of God provokes us to seek to awaken what is best, in every person we meet, every group that we encounter[2].

God’s vulnerability is seen in overwhelming self giving. When as individuals or societies we grab for power, compete for resources and neglect the weakest and most vulnerable amongst us we neglect Christ himself. Where people are measured in their worth only by what they can produce, what economic value they have, then Christ is denied and our own humanity corrupted.

The great ikons of Christ for us are all those of vulnerability; a baby, a man dying abandoned on a cross, bread and wine that can be crushed and spilt. Yet from the  vulnerability we get life complete, eternal.

The vulnerable God was born into a world that rejected him, and yet he loved it without limits. As we look around our world at injustice and conflict he calls us to His pattern of love: we see victims and perpetrators, and in loving them without limits we challenge every injustice and any demeaning of human beings.

Today, singing of Bethlehem, we see injustices in Palestine and Israel, where land is taken or rockets are fired, and the innocent suffer.

We see injustice in the ever more seriously threatened Christian communities of the Middle East. They are attacked and massacred, driven into exile from a region in which their presence has always been essential.

We see terrible news in South Sudan, where political ambitions have led towards ethnic conflict. On Saturday I was speaking to a Bishop under siege, in a compound full of the dying. God’s passionate love for the vulnerable is found in the baby in a manger in a country at war. If that was His home, today it must be our care.

We see injustices at home. Even in a recovering economy, Christians, the servants of a vulnerable and poor Saviour, need to act to serve and love the poor: they need also to challenge the causes of poverty. Prospect magazine had a poll this month that suggested the church is more trusted on politics than religion. But the two cannot be separated. Christ’s birth is not politics, it is love expressed. Our response is not political, but love delivered in hope. The action of the churches in the last five years is extraordinary, reaching out in ways not seen since 1945. Yet no society can be content where misery and want exist, unless through our love collectively we also challenge the greed and selfishness behind it.

We will speak and act best when we are caught up in following the vulnerable God as His disciples in His way. Then His love fills us, His compassion drives us on, compassion for every person, at every point of life or wealth or power. When individual Christians and the church together believe, and act on that belief, every human attitude is challenged, especially about the poor, and the world changes.

We follow the God who is Saviour, whose word of love was found in action and word. He rescues us from our brokenness and makes us carriers of life and light. Christ calls for that great line of witnesses that has swept down through the centuries to be continued today by a church that is confident in the message of God’s love and truth. It will always be an untidy church because we are in a vulnerable, untidy, broken world. Yet when we see the fact of Christ’s birth, hear the witnesses, receive the life he gives and respond in passionate discipleship then all our vulnerabilities, muddles and weaknesses are carried in His strength. The Christian meaning of Christmas is unconditional love received, love overflowing into a frequently love-lost world.