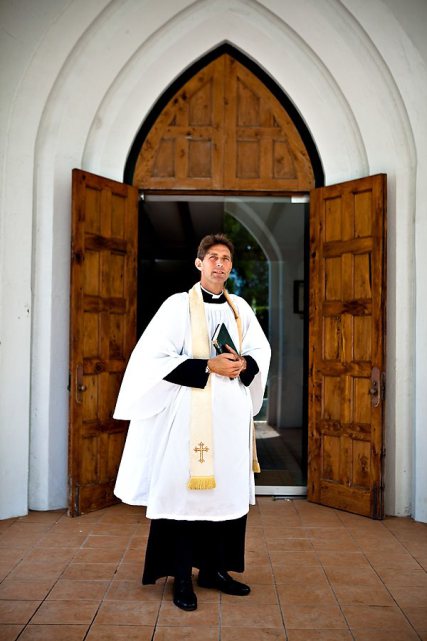 The Anglican Church of Bermuda today [Dec 5] joined with millions of people around the world in expressing its sadness at the death of the great anti-apartheid leader and former President of South Africa.

“Having sat in Nelson Mandela’s cell on Robben Island and met those whose lives had been changed by his example, I am grateful to God the role he has played in re-shaping our view of the possibilities of reconciliation and healing between the races – against all odds,” said the Bishop of Bermuda, The Rt Revd Nicholas Dill.

He continues, “Former President Mandela turned the tide of our response to our enemies with a message of forgiveness.

“I often quote one of his loyal followers, when he said Mandela taught us ‘You can never accomplish anything as long as you hate your enemy… Hate his politics; hate the evil behind those politics; hate the policies that put you into prison. But never hate the person.’ And this is what was modelled in Robben Island.”

“His policy of non-hatred brought another fellow ANC fighter to a point of forgiveness for the guard who held him in prison and he found that through the power of the Holy Spirit he was able to invite the guard to put his gun down and to share Holy Communion with him.

“As a fellow lawyer, he also impressed me with his ability to use calm and persuasive reasoning rather than emotive and divisive rhetoric to persuade, and then lead others to a new place of discovery of self and the interconnectedness of human kind. He is truly an international icon of hope, peace and the need for speaking the truth in love for our times. ‘

A Church spokesperson said, “At the time of this death we want to express our deepest sympathy with the people of South Africa in the loss of the father of the modern nation of South Africa. Our hearts go out to those South African nationals who now live in Bermuda who are far from home as their nation mourns. We wish to offer all those who mourn Nelson Mandela’s passing our prayer and support.

“We also pray for the ongoing legacy of Nelson Mandela whose life shone with such clarity in the darkness of apartheid and in the rebuilding of that country. We recommit ourselves to striving, with others who oppose evil, to seek to transform unjust structures in human society wherever they may be found.

“On the day of his funeral, at the Cathedral Church of the Most Holy Trinity special prayers will be said, and the Cathedral will be open from 8:00am-5:00pm for prayer and quiet reflection upon the life of this great man.”