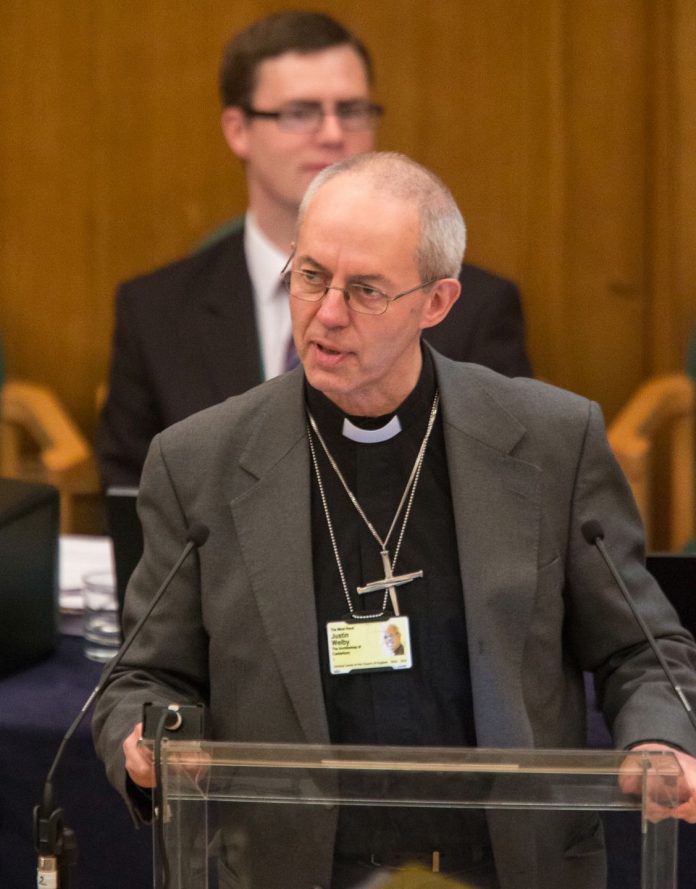 ‘The last couple of months have seen the terrible atrocities in Peshawar and Nairobi, and the typhoon in the Philippines. The first was aimed at an Anglican Church, the second deeply affected Anglicans among others. I offered to visit both: the Primate of Pakistan felt it would not be helpful in light of the security situation at the time, while I was able to get, fleetingly, to Nairobi for a condolence visit, where I had an emotional and warm welcome from Archbishop Wabukala. In the light of the terrible casualties in Peshawar, I hope the Synod might consider sending a further message of support to our suffering sisters and brothers in Pakistan.

‘The attacks in Pakistan are amongst many which have been afflicting Christians around the world. Many parts of the Anglican Communion suffer greatly, and the Synod will, I trust, acknowledge both the suffering and courage of many of our sister and brother churches in places like Nigeria. The issue of how we support each other, and how we understand and confront violent attacks in the light and grace of Christ is certainly one of the greatest of our age.

‘Earlier this month I was at the World Council of Churches in Busan in South Korea. If I’m being really honest, I confess to being surprised, having believed the propaganda about the uselessness of such events, yet being confounded by the reality of a world-church-gathering seeking to express love for Christ and for each other. I shall believe less propaganda in future. The WCC certainly has its issues of unity and coherence, but then who doesn’t; but it holds together an extraordinary diversity, united in the main by love for Jesus Christ.

‘The last few months have seen changes in the leadership of ecumenical work. In particular efforts to reduce costs have led to seeking to avoid overlap between Lambeth and the Council of Christian Unity, with the weight of ecumenical work at Lambeth being taken by the Bishop at Lambeth, together with the lead Bishops for each dialogue or conversation. This development of closer working relationships is not only cost effective, but much more importantly, is liberating a fresh impetus and imagination in ministry.

‘In dialogue with the Catholic Church, as well as very positive work in ARCIC and English ARC, there will at the end of this weekbe a joint Bishops meeting with the focus being on evangelisation.

‘One very important and major initiative can be announced today. It’s not large but it is symbolically significant. For 24 years three different Anglican orders have had Sisters at Lambeth, supporting the spirituality there. This has been a gift of almost immeasurable value. Sadly, for reasons within the orders, this is no longer possible for them. Accordingly, from January a Catholic order with an ecumenical and teaching vocation will be created, initially with four members, at Lambeth. They’re called the Chemin Neuf. This arrangement has been put in place by Rev Dr Jo Wells, my Chaplain. It is an ecumenical step of some significance.

‘In October I was at the Porvoo Primates Meeting in Reykjavik. This was a first for me, and the meeting was notable for its great warmth, constructive purpose and hopes for a significant level of further visible unity. The dialogue with Porvoo has been led by the Bishop of Newcastle, whose work has been exceptional in this regard.

‘In January I hope to meet the orthodox ecumenical Patriarch.

‘Within the Anglican Communion the schedule has also been busy. The Archbishop of York has made a number of visits, most notably recently to Canada and to Cairo. I have started a programme of visiting all Primates of the Anglican Communion very briefly on a personal and private basis. Out of the 37, 10 have so far been visited and 27 remain, with the aim of completing the visits by about a year from now.

‘While I was in Nairobi for the condolence visit, I was there just before the beginning of GAFCON, and I had the opportunity to benefit from meeting a number of primates who had arrived for it. This was a great pleasure, and, as always, an education. As leader of GAFCON Archbishop Wabukala was as gracious as could have been wished. There were naturally, as you may have noticed, different views expressed about different aspects of the Anglican Communion while I was in Nairobi and subsequently, including views about me, it has to be said not invariably warm and cuddly, but I was genuinely most glad to have had the opportunity to meet, and I have to say that the overwhelming response was not only kind but also deeply encouraging.

‘In the political sphere, the last few months have been very busy indeed.

‘The Parliamentary Banking Standards Commission, initially intended to be all over by Christmas, last Christmas, continues in its final stages with a major debate next week on the more than 1,000 pages of reports which the Commission produced during the time I was on it – I remain on it although it’s technically coming to an end – and it is also involved in resulting legislation, in which I am inevitably involved as well. It has been a good opportunity for the church to contribute to national thinking in an area where we are not always institutionally visible, but I will be more than delighted when it is buried, ideally with a stake through its heart and garlic between its teeth.

‘At the same time there has been the Same-Sex Marriage Act, which again took much time for both the Archbishop of York and myself and for a number of other bishops. I have spoken of this at other points and do not intend to say more about that now.

‘As always, there have been a number of meetings with political leaders, part of an ongoing dialogue in which most Bishops are involved in one way or another. And it is clear that these discussions are almost invariably warmly welcomed by both sides and a great privilege for all of us who are involved in them, even when there is disagreement.

‘Lastly, I want to draw your attention to a new initiative that accompanies this Synod meeting – a pattern of continuous prayer that is operating in the Church House chapel just along the hallway, along with parishes and other communities around the country. I do encourage you warmly to drop in there in a gap – it is rolling from 8am to 7pm, the whole time we are in session – and you can drop in for 2 minutes or 20 or whatever seems appropriate. Prayer reminds us of the big picture that what we are doing here is all about God – a reminder we sometimes need more than ever in the midst of our legislative processes. Let us therefore hold a moment of silence and particularly hold before the Lord those who have suffered and are suffering around the world from persecution, violence and natural disaster.’