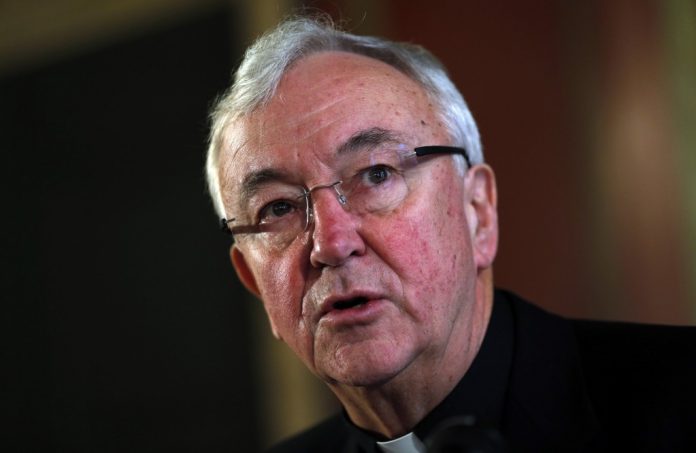 You might think that Christmas could be nothing but Christian, but that would be to underestimate not only the dulling numbing of secular holidaying, but also the more serious insidious wokery that has sprung up to challenge it.

Cardinal Nicholls is alone amongst Christian leaders (so far) to have spoken out on Times Radio about the danger and damage of diluting our Christian rituals. He did so today in response to the inclusion of a new “queer” version of “God rest ye merry, Gentlemen” at a carol service on Monday this week.

He is right. But in order to appreciate quite how right he is, we need to take stock of what lies behind this assault on Christian lyrics so we can judge how seriously we take it.

Secularism was content that “you shopped until you dropped”. But “wokery” is a new religion.

It emerges through the mists of Jungian archetypes and our therapeutic obsessions. But it’s not hard to understand what it sets out to do. It wants to replace God with Man, or, to be bang up to date, Persons.

Jung described what his new Gnosticism was about when he explained that in his view the Self (note the capital ‘S’) and the idea of God were interchangeable. For Jung salvation had to be replaced with the fulfilment of the full potential of each person – what he called “individuation”. So we move away from worshipping the Creator to worshipping ourselves. There is an old word for an old concept: idolatry.

By some strange alchemy this therapeutic idolatry has got mixed up in a form of spiritualised power politics fostered in the world of political correctness. However we account for the emergence of wokery, it has poached parts of the Christian world view and then woven a different morality play out of the ingredients. It has become all about the redistribution of power.

The holiness of God has been replaced by the sanctity of victimhood. One of the weaknesses of wokery is its unthinking collectivism. Simply belonging to an allegedly oppressed group credits you with the new societal sanctity.

The traditional 17th century carol “God Rest Ye Merry, Gentlemen” features lyrics about Jesus’s birth and the joy of the shepherds and Mary.

However, at a carol service on Monday, alternative lyrics were printed to feature “new inclusive words for a traditional hymn”.

All Saints with Holy Trinity church in Loughborough used the carol with updated lyrics that removed references to Christ as saviour and to Satan. Instead they sang:

“God rest you also, women, who by men have been erased,

Through history ignored and scorned, defiled and displaced;

Remember that your stories too, are held within God’s grace.”

Not only does this suffer from the broadest and clumsiest of historical brushes, it also offers an inferior solution to sin and suffering. The promise of God holding the stories of gender victimhood within His grace is less convincing and dramatically hopeful than “Christ saving us from Satan’s power when we had gone astray”. But its authors don’t believe in sin, Satan or salvation.

As it happens, Christianity offers a far more effective remedy to both oppression and womanhood than wokery.

Not only does Christ win forgiveness for us on the cross, but the figure of Mary lies at the heart of Christmas. In terms of influence she might be thought to be the most “powerful” woman who ever lived. Perhaps we should make a distinction between potency and power as the capacity to manipulate and control? Mary has potency, but refuses power.

And here lies the rub. We are facing  two opposed value systems. The value system that Mary embodies is the overturning of tyranny with love, obedience and trust. Wokery wants to confront tyranny by replacing one more structure with another. It can only replace tyrannical men with tyrannical women. There is no monitoring of the guardianship of power. There is nothing more ethical about the new power structures.

So the new lyrics introduce a different and opposing value system. Jesus and Mary offer the transformation of human desires with love and obedience, refusing end repudiating power; and no wonder, for the lure of power was one of the most insidious of the temptations Jesus faced in the desert.

These new lyrics confront and subvert Christian ethics with a revision of human sexuality:

“God rest you, queer and questioning, your anxious hearts be still,

For all to live as one in peace; the global dream fulfilled.”

“Queer” is a code word containing multiple layers of meaning. Linking “questioning” with it suggests the author is trying to invest it with a certain vulnerable charm. Who is not sympathetic to questions and quests? But what most people who use it as part of their identity intend is a degree of subversion.  This in itself might be a neutral matter if it wasn’t for the context it operates in. The subversion intended is usually Judaeo-Christian culture. It stands for an anti-Christian ethic. It is no surprise then that one of the effects of society embracing the “queer and questioning” is the dissolution of heterosexual marriage and the protection and promotion of children in a stable marriage with their biological parents.

The Church does not believe this assault on Christian marriage and the undermining of the protection of children is part of God’s good will, or a way of promoting peace. On the contrary, the breakdown of the classical Christian marriage as a normative pattern for society has had serious implications for the damage to the stability of children.

Fr. Paul Sullins, a Catholic priest and former sociology professor at the Catholic University of America, makes this case succinctly when he argues:

“There is a war on marriage today,”  ( quoting Pope Francis). “It’s not a physical war of weapons, but a war of ideas. An ideological colonization that is trying to destroy the family by efforts to redefine the very institution of marriage.”

“This attack on the family is based on a demonic gender ideology that denies the order of creation, expressed in the complementarity of men and women… So for children, homosexual ‘marriage’ accomplishes the exact opposite of conjugal marriage. Conjugal marriage assures for a child, as much as possible, the secure care of both his or her biological parents. Homosexual ‘marriage’ assures that a child will never have the care of both biological parents.”

The global dream of the progressive lyricist run completely counter to the Law, the prophets and Jesus’ reaffirmation of them in the Gospels. Whatever the carol celebrates, it is not the birth and work of Christ.

Cardinal Nicholls in an interview with Times Radio addressed the issue in terms of social, musical and cultural cohesion. He compares the shifting sands of secular fashions, ideas and ethics with the foundation of Christian culture that has lasted for two thousand years:

“I think what Christmas does… it tells us the importance of ritual. And ritual helps us to step outside of our own little bubble, connect with something that we have received, inherited, and that we hope to pass on.

“And I think those values of a continuation of musical repertoire, of the ability to sing together, of looking at the rituals that have been fashioned over centuries. And those are probably for me, more important than particular sensitivities which come and go.”

The Cardinal’s rallying cry to the Church is to be true to what Jesus taught and what the Gospels describe; to be true to the profound and authentic lives the saints and the people of God have lived, to be true to holy tradition which glues the best in our culture together.

His words may well inspire other Christians and church leaders to defend and celebrate authentic Christianity in words and song against those who twist it out of shape and speed the disintegration of our history, our music, our poetry and God’s truth.