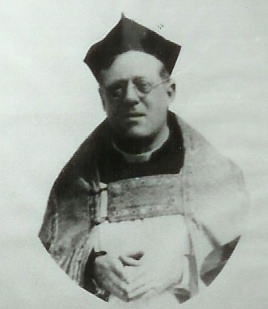 Royal Asiatic Society (RAS) Korea has had 56 presidents in its 122-year-long history. Forty-six men and women have served in the voluntary but busy role. Seven of them served non-consecutive, multiple terms. They have come from many walks of life. There have been many diplomats, including the first president elected in 1900, John H. Gubbins, who was the senior British diplomat in Seoul at the time. Bankers, businesspeople, missionaries, scholars and members of the U.S. military community have given faithful service to the Society. Koreans, Germans, British, Dutch, Americans, Canadians, French and others are included in the long list of officers and council members.

In many ways, looking over the history of RAS Korea, Father Charles Hunt was an ordinary Koreaphile (lover of Korea and things Korean) like his predecessors and successors. Hunt was an Anglican missionary when he first came to Korea in 1915. His mission society, the Society for the Propagation of the Gospel in Foreign Parts (S. P. G.)., was founded in 1701 and is based in London as the United Society Partners in the Gospel.

Born in 1889 in England, Hunt was a young university graduate when he went to Ganghwa Island to learn Korean and was ordained a deacon in 1916. Ganghwa was where the Anglican church first began in Korea. Hunt then went to North Chungcheong Province to serve a congregation in Jincheon. On ordination as a priest in 1917, he moved to Seoul, where he served at the Cathedral Church, which in 1917 was a traditional hanok building on the site of the present-day Cathedral. Bishop John Corfe purchased the land and consecrated the building in 1890, and construction on the current Cathedral began in 1922.

Father Hunt was an avid theater director, and during the 1920s and 1930s, he produced and directed plays at Seoul Foreign School, the Cathedral and other venues. He had a long-running series of Shakespeare plays and had performances for the foreign community and Koreans and Japanese learning English. Hunt was busy as a professor at the Anglican seminary, training young men as priests and teaching them church history and music. He wrote a regular column for children in the Anglican Church magazine in Korea, Morning Calm. He also helped care for the children at a church-built hostel for street boys and orphans near the Cathedral. Hunt spent a few years in Yeoju, in charge of mission work in Gyeonggi Province. During his time there, he developed a keen interest in the area’s historic sites. His essay on the town and surrounding areas was published in RAS Korea’s annual Transactions, vol. 31 (1948-49).

Yeoju, located 60 kilometers southeast of Seoul, on the south bank of the Han River, had, in Hunt’s time, a small Methodist Church and a small hospital (St. Anne’s) run by the Anglicans. Hunt’s congregation was housed in what he described as the “attractive” Church of Our Lady. He wrote there were at least four beautiful historical sites that deserved a visitor’s attention. He listed them as:

“(1) The Buddhist Temple called Shin-Ruk-Sa or “Brick Temple.”
“(2) The Royal Tomb of Sei-Jong
“(3) The Pavillion Commemorating the scholar Song Si Yul.
“(4) The Soh Won or College of Song Si Yel.”

Hunt was a masterful writer, perhaps honed by his love of Shakespeare, and gave exquisite descriptions of what he saw. About the temple, he wrote:

“In the Spring and early Summer, there is a wealth of flowering trees and shrubs among which the azalea, the forsythia and cherry blossom are abundant. In the center court before the great shrine there is a fine specimen of the guelder rose.

“A large tree, the Linden or the Lime tree, called by the Koreans the Yum-ju-na-mu, the sacred tree of Korean Buddhists, the Korean equivalent to the Bodhi Tree, stands near the central shrine. From the berries of this tree, Buddhist monks make their rosaries, and this one at Yo-Ju is said to have grown from the walking stick planted there by the famous monk, Na Ong, in the 14th Century.

“One of the chief items of interest is the Brick Pagoda which gives the popular name to this temple, Pyek-Chul brick temple. This brick pagoda is not the only one of its kind in Korea although it is more usual to build pagodas of stone than of brick, but this brick pagoda is certainly a handsome one of mellowed reddish brick ― not the dark grey of the old bricks of Korea. The bricks are for the most part if not all, carved or embossed with a figure of a Buddha and it stands as a sinking monument on a raised eminence near the river but hidden rather by the trees surrounding it.”

Father Charles Hunt served as president of RAS Korea in 1935. His friend and mentor, Bishop Mark Trollope, the Anglican bishop of Korea, served three non-consecutive terms as RAS Korea president when Hunt was in Korea. Trollope died in office, in 1930, from a heart attack suffered from the shock of the ship he was on in Kobe (Japan) harbor, returning to Korea from the Lambeth Conference in England.

Hunt left Korea in 1940 after the first volleys of the war in Europe. He served as a naval chaplain during the war but could not return to Korea until 1949 when he was elected vice president of RAS Korea. As 1950 began, Hunt was elected to serve another term as RAS Korea president, but his service was cut short on June 25, 1950, when the North Koreans invaded Seoul. Hunt and several Anglican priests and nuns, Catholic priests and others were captured by the North Korean army and forced on the infamous Tiger Death March. The march was named after the North Korean colonel who led it, whose nickname was “The Tiger.” As the United Nations forces were overrunning the North Koreans, they retreated to the Yalu River, on the border with China. On Oct. 31, 1950, more than 800 prisoners, 80 of whom were non-combatants, were forced from Manpo to Chunggang, where they arrived about 10 days later. Already in poor health, Hunt died at the end of the march. A year later, there were fewer than 300 survivors.

Father Charles Hunt’s portrait hangs in the Seoul Anglican Cathedral, along with several of his colleagues, both priests and nuns, who died at the hands of the brutal North Koreans. Those brave souls gave their all for Korea and Christ and are considered both patriots and martyrs.

Hunt published four papers in RAS Korea’s Transactions between 1930 and 1950. They can be found online at raskb.com. For this year’s Transactions, vol. 96, RAS Korea President Emeritus Brother Anthony published a biography on Hunt’s life and times.